Tyren Day, an 18-year-old who grew up in West Baltimore, once figured he'd become a tradesman, probably a mason. But after spending last summer in a Johns Hopkins University biophysics lab, purifying cells and cloning genes, his plans have changed. He's thinking scientist, researcher – maybe even doctor. 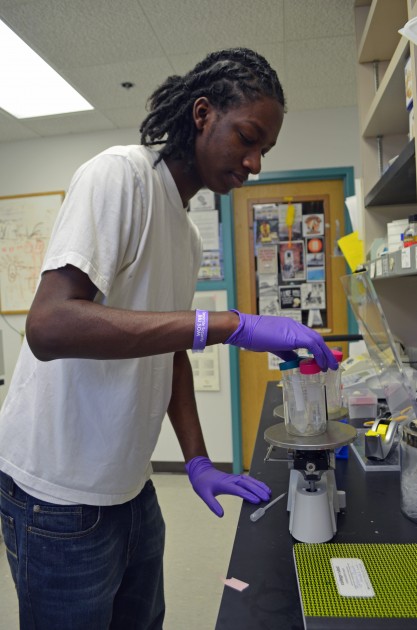 "It got me to see things in a different light," said Day, who's now majoring in chemistry at Community College of Baltimore County and returning to Johns Hopkins again this summer. "Where I come from, it's hard. Just going to college is awesome. But now I know I can go to med school. I could go to graduate school. I just want to learn more."

Day is part of Biophysics Research for Baltimore Teens, a paid summer internship program that aims to give high school students from low-income communities a head start in science careers by exposing them to the thrills of university-level bio-medical lab work.

"In the lab, they actually witness the cutting edge discovery process," said Jungsan Sohn, the program's director and an assistant professor of biophysics and biophysical chemistry in the Johns Hopkins School of Medicine. "And at the end of the summer, I hope they understand that science is cool. And that by learning science, they have the possibility to do whatever they want."

This summer's four interns started June 17 and will continue, five days a week through August 16. They will spend their days taking classes in the fundamentals of science and conducting basic research in labs on the Homewood campus and at the institution's medical location in East Baltimore. Each intern is paired with a faculty member and a lab mentor as well as an undergraduate mentor – all available to help with classwork and talk about possible career paths.

After a summer of microscopes and test tubes, the interns will present their research to faculty, postdocs and graduate students at the Institute for Biophysical Research's annual retreat in September.

Bertrand Garcia-Moreno, chairman of the T.C. Jenkins Department of Biophysics in university's Krieger School of Arts and Sciences, watched one student's confidence grow last summer as he and others in the lab showed the student how to modify proteins – the same work happening at more advanced levels in the biotech industry.

"When high school students come in they're like deer in the headlights," Garcia-Moreno said. "But I hope they come out with the assurance that they can do anything and with an awareness about a whole world they could never before imagine."

Biophysics Research for Baltimore Teens is an off-shoot of a similar program launched in 2011 by two former city teachers called Medical Education Resources Initiative for Teens. Through that year-long program, high school sophomores in city schools with the potential but perhaps not the means to attend medical school get a leg up with SAT tutoring, college admissions help and summer internships at Johns Hopkins Bayview Medical Center and the National Institute of Drug Abuse.

Funding for Biophysics Research for Baltimore Teens comes from the Office of the Provost, the School of Medicine Dean's Office, the Office of Multicultural Student Affairs, the Thomas C. Jenkins Department of Biophysics and Baltimore City YouthWorks.

Day is looking forward to spending the summer learning how DNA proteins move along the DNA chain in the lab of James T. Stivers, a pharmacology and molecular sciences professor in the School of Medicine.

"As long as you're engaged and learning, they are with you," Day said about being on campus. "They don't care about before. They want you to know what's in the future."