Bubbles in a champagne glass may add a festive fizz to the drink, but microscopic bubbles that form in a material called metallic glass can signal serious trouble. In this normally high-strength material, bubbles may indicate that a brittle breakdown is in progress.

That's why Johns Hopkins researchers used computer simulations to study how these bubbles form and expand when a piece of metallic glass is pulled outward by negative pressure, such as the suction produced by a vacuum. Their findings were published recently in the journal Physical Review Letters.

"A lot of people are interested in metallic glasses because of their strength and their potential use to make better cell phones cases, computer housings, and other products," said Michael L. Falk, a Johns Hopkins materials science professor who supervised the research. "But what precisely causes these materials to break apart or 'fail' has remained a mystery. By studying the behavior of the bubbles that appear when these glasses crack, we were able to learn more about how that process occurs."

When glass is mentioned, many people think of window panes. But to scientists, a glass is a material that is cooled quickly from a liquid to a solid so that its atoms do not arrange themselves into orderly crystal lattices, as most metals do. A nearly random arrangement of atoms gives glasses distinctive mechanical and magnetic properties. Unlike window panes, most metallic glasses are not transparent or easy to break, but they do often spring back to their original shape after being bent. Still, when powerful enough force is applied, they can break.

"Our lab team is interested in learning just how susceptible metallic glasses are to fracturing, how much energy it takes to create a crack," Falk said. "We wanted to study the material under conditions that prevail at the tip of the crack, the point at which the crack pulls open the glass. We wanted to see the steps that develop as the material splits at that location. That's where dramatic things happen: atoms are pulled apart; bonds are broken."

At the site where this breakup begins, a vacant space—a bubble—is left behind. The spontaneous formation of tiny bubbles under high negative pressures is a process known as cavitation. The researchers in Falk's lab discovered that cavitation plays a key role in the failure, or breakdown, of metallic glasses. "We're interested in seeing the birth of one of these bubbles," he said. "Once it appears, it releases energy as it grows bigger, and it may eventually become big enough for us to see it under a microscope. But by the time we could see them, the process through which they had formed would be long over."

Therefore, to study the bubble's birth, Falk's team relied on a computer model of a cube of a metallic glass made of copper and zirconium, measuring only about 30 atoms on each side. By definition, a bubble appears as a cavity in the digital block of metallic glass, with no atoms present within that open space. "Through our computer model experiments, we wanted to see if we could predict under what conditions these bubbles can form," Falk said.

The simulations revealed that these bubbles emerge in a way that is well predicted by classical theories, but that the bubble formation also competes with attempts by the glass to reshuffle its atoms to release the stress applied to a particular location. That second process is known as a shear transformation. As the glass responds to pressure, which of the two processes has the upper hand—bubble formation or shear transformation—varies, the researchers found. For example, they determined that bubbles dominate in the presence of high tensile loads, meaning the strong pulling forces that are more common near the tip of a crack. But when the pulling forces were at a low level, the atom reshuffling process prevailed.

Falk and his colleagues hope their findings can help scientists who are developing new metallic glass alloys for products that can take advantage of the material's high strength and elasticity, along with its tendency not to shrink when it is molded to a particular shape. These characteristics are prized, for example, by makers of cell phones and computers. Producers of such products have expressed interest in metallic glass, and the Falk team's research may help them develop new metallic glass alloys that are less likely to break.

"Our aim is to incorporate our findings into predictive models of failure for these materials," Falk said, "so that they can be optimized and used in applications that require materials that are both strong and fracture-resistant."

The lead author of the Physical Review Papers article was Pengfei Guan, a postdoctoral fellow in Falk's lab. Along with Falk, the co-authors were Shuo Lu, Michael J. B. Spector, and Pavan K. Valavala, who were all part of Falk's lab team at the time the research was conducted. The work was supported by a National Science Foundation grant. 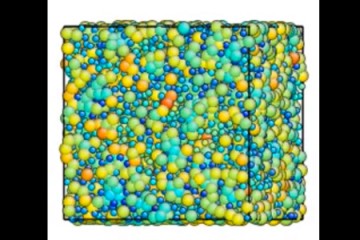