Nicholas P. Jones, dean of the Whiting School of Engineering at Johns Hopkins University, has been named executive vice president and provost at Penn State University, President Ronald J. Daniels announced in an email message to the JHU community today. 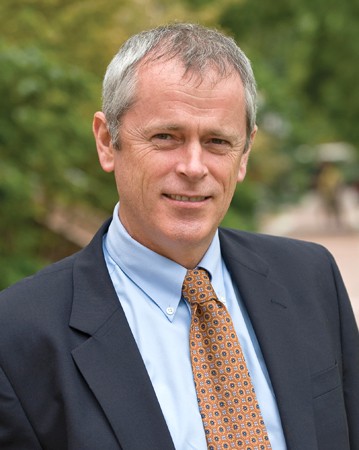 The executive vice president and provost is Penn State's chief academic officer, reports directly to the president, and acts as chief executive officer in the absence of the president.

"I know that everyone at Johns Hopkins joins us in offering Nick congratulations and best wishes," Daniels wrote. "I thank him most sincerely for everything he has done for our university."

Jones will assume his new position July 1. Information on interim leadership at the School of Engineering and the search for Jones' successor will be shared in the near future, Daniels wrote.

"The Whiting School is an extraordinary place, one that I cherish," Jones wrote in an email message to School of Engineering faculty and staff this morning. "I draw immense pride from all of your accomplishments and never cease to be impressed by your talent and commitment. Together, we have achieved so much and I want you to know how grateful I am for the support you have provided over the years."

As dean, Jones has overseen a strategic restructuring that has led to gains in enrollment; expanded academic offerings; significant gains in funded research; diversification of the faculty and student body; and the establishment of several institutes focused on interdisciplinary research, among other achievements.

Daniels cited several examples of institutes or programs established at the School of Engineering during Jones' tenure, including the Institute for NanoBioTechnology; the Institute for Computational Medicine; the Laboratory for Computational Sensing and Robotics; the Hopkins Extreme Materials Institute; the Environment, Energy, Sustainability and Health Institute; the Global Water Program; and the Systems Institute.

A native of New Zealand, Jones received his undergraduate degree in civil engineering from the University of Auckland in 1980 and came to the United State to earn his master's and doctoral degrees from the California Institute of Technology in 1981 and 1986, respectively.

"Dr. Jones is an outstanding choice for this position and will be an important part of Penn State's leadership team in the years to come," Erickson said in an announcement released by Penn State. "He brings with him broad experience in higher education and a proven record of success in teaching, research, administration and interdisciplinary collaboration. His will be an important voice as we continue on our trajectory of top-flight academic achievement and set priorities for the university's future."