"Any of you guys come because your teacher told you to come?," asked novelist Junot D&iacute;az at the beginning of his visit to the Homewood campus on March 29. A smattering of hands went up among the students, faculty, and community members who had come to Hodson Hall to hear D&iacute;az, and he smiled and thanked those students for being honest. 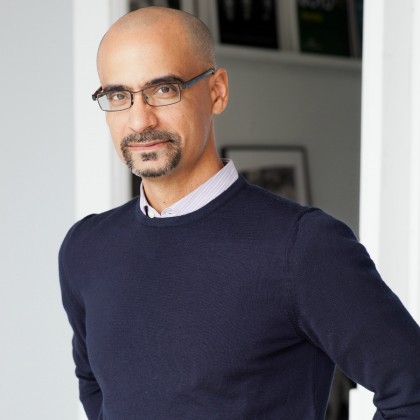 The Dominican Republic-born, New Jersey-raised D&iacute;az then asked if there were any Dominicans in the audience; a few people politely clapped. When he asked if there was anybody from New Jersey present, an enthusiastic response ensued. He shook his head a little bit in disbelief. "I can't believe Jersey made more noise," he deadpanned, drawing the first of the many laughs that peppered his appearance.

Funny, thoughtful, and gracious, D&iacute;az read from The Brief Wondrous Life of Oscar Wao, his 2008 Pulitzer Prize- and National Book Critics Circle Award-winning novel and responded to a number of questions from the audience. Each of his responses was a mini-lecture in the contemporary politics of language, the limits and potentials of literary genres, and the patient process of writing. It was a rich, penetrating discussion, in which D&iacute;az freely moved from historical analysis to witty observation in his measured, animated voice.

He frequently returned to language in his responses, discussing the role it plays in defining people and their notions of national identity. D&iacute;az's prose mixes and mingles standard and slang varieties of Spanish and English, a strategy that professor Marc Caplan, who introduced the visiting author, refreshingly noted is far too frequently and dismissively dubbed "Spanglish." D&iacute;az discussed the national obsessions with proper language, touching on those assumptions made about nonnative or regional accents. "You're not Dominican enough if your Spanish isn't good," D&iacute;az said of his own experience. "In the U.S., I wasn't American because I spoke Spanish. Or, 'You speak with this accent, [therefore] you're not smart.'"

For D&iacute;az, whose 2012 This is How You Lose Her story collection was a National Book Award finalist, such notions of linguistic purity are efforts to control a national narrative, a power structure that divides people based on some perceived difference so that they don't recognize what they might have in common: how we speak, quite simply, is an efficient way to separate people into an "us" and "not us." D&iacute;az, a professor of writing in M.I.T.'s Program in Writing and Humanistic Studies, has a casual confidence at the front of the lecture hall, and his nimble mind moves from euphemistic expression to historical narrative to illustrate his points. Talking about how the way he spoke growing up made him not Dominican enough in the Dominican Republic or American enough in the U.S. framed identity as some kind of quantifiable, tangible thing, "as if Domicanness is so valuable we want to make sure people don't steal it," he said, before going into discussion of Jos&eacute; Mart&iacute;, the 19th-century Cuban writer and intellectual who united a diverse group of people in a bid to free Cuba from colonial Spanish rule.

D&iacute;az has succinctly expressed this notion of solidarity through shared struggle as the Mart&iacute; mind, and it's an outlook that doesn't conform to the contentious ethnic separatism that often defines today's geopolitical partitioning of the globe. "Our identities were not always formulated in this commodity-scarcity model," D&iacute;az said. "It's as if we're afraid to share our oppression [because] if there's too many of us we might have to do something about it."

D&iacute;az's appearance inaugurated the "American Voces" speaker series, a new collaboration among the Program in Latin American Studies and the Department of German and Romance Languages and Literatures. (The Department of English also helped bring D&iacute;az to campus.) The series was founded and organized by graduate students Amanda Smith and Amy Sheeran, who describe it as:

American Voces is a student-initiated speaker series featuring contemporary authors whose work deals with the plurality of latin@ experiences in the United States. The series provides a forum to engage with these authors and their work and to reimagine the cultural borders that have delimited the traditions of U.S. and Hispanic literatures. We invite the community to participate in this conversation.

Smith and Sheeran are currently putting together the schedule for the 2013-2014 academic calendar, and plan on bringing one to three authors every year.

D&iacute;az set the tone for the series. Whether he was talking about how the genres that "nobody takes seriously"—such as of horror, science-fiction, and fantasy—are better equipped to tell the stories of colonialism's cultural violence than conventional narrative realism or offering advice for aspiring writers, he spoke candidly and self-deprecatingly used himself as an example. He said that it took him time to get published quite simply because he writes slowly, and advised aspiring writers not to be in a rush to get published. It takes time to find what he called "news of the world" to write about, and then the writing process itself can take awhile. "Most of us bite off projects we're not equal to," D&iacute;az said when talking about how, although he wants to write a "crazy, Dominican end-of-the-world story," he hasn't written any chapters for it yet—and that's OK. "That's what we do as artists. You have to become the person you need to be to complete the work."