SONAR new music ensemble ventures to the dark side 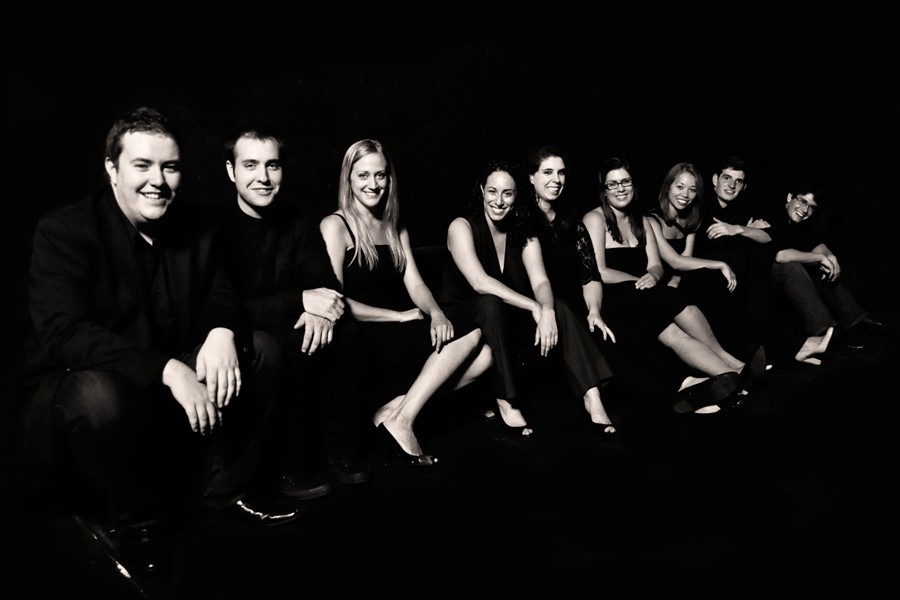 Halfway through its first new season in three years, the SONAR ensemble is heading into darkness. The new music ensemble was founded in 2007 when violinist Colin Sorgi, then an undergraduate at the Peabody Conservatory, got together with a number of his Peabody classmates to perform the contemporary classical music they liked. At the time there was much less new music being performed in the city than there is now. They performed at the Walters Art Museum and the Hubble Space Telescope building on the Homewood campus. That program included music paired to cosmos images the telescope had captured. "We were kind of trying to bring a whole bunch of new music to the public and do it in a way that was fun and engaging and accessible," Sorgi says.

Graduation temporarily disbanded the group in 2009. Sorgi has returned, however, and put the band back together for an impressive new season that debuted in October with a program featuring works by "trailblazing" American composers, including Aaron Copland, John Cage, and a debut by the company's composer-in-residence Roger Zare. On Friday at the Theatre Project, SONAR puts together a knock-out program featuring two monolithic pieces. George Crumb's Black Angels, from 1971, is a powerful piece for electric string quartet, and for this performance SONAR has partnered with actors from local theater companies and local artists to complement the music with a visual component.

That visual element is swallowed whole by the other piece on the program, Georg Friedrich Haas's Third String Quartet (In iij. Noct), for which the Austrian composer stipulates that it should be performed in total darkness. It's a piece that never fails to elicit some complex responses. 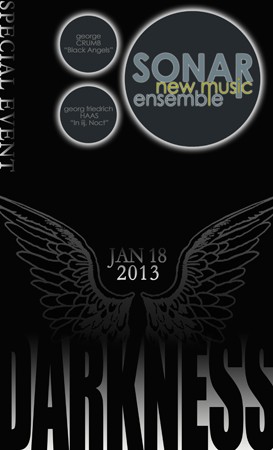 We caught up with Sorgi by phone to talk about one of the heaviest string quartet programs of recent memory, with one piece dating from the Vietnam War-era and the other performed in the absence of light.

I think Black Angels was our starting point. We really wanted to do it. It's a huge piece that we all know of and it's become so famous in the last couple of years [that] it was something that we couldn't really pass up. And then I came across the Haas quartet last year. I had heard about it because a friend of mine was working on it with the composer. And she was telling me about it and it sounded like they would go perfectly together. They draw on a little bit of the same ideas—different sound effects, different sound worlds—but the idea of turning off the lights completely was so cool to us. And it seems to go really well with the Crumb, especially since we're adding some extra-musical elements [to Black Angels] with the actors and artwork. It's going to be a very visual experience and then absolutely no visuals.

What made you want to partner with people to create a visual production? Is there going to be a narrative element to that—either the title's allusion to angels being banished from heaven or the piece itself being composed during the Vietnam era?

I think the overlying theme that we're trying to put together are themes of life and death. There isn't any really specific tie-in to the Vietnam War, which is what the piece is ultimately inspired by I think.

I think the reason we wanted to do this is we call ourselves a new music ensemble and for us the Crumb is actually pretty old—and everyone knows it so well that we wanted to really do something different with it, and do something to enhance the music, not that it needs anything. But sometimes you go to a concert and there's a stuffy concert hall feeling and there's not as visceral an experience as I think Crumb would have imagined it to be. We're not changing the music in any way. I think it's going to make it just a completely incredible experience, visually and aurally.

Have you seen or performed the Haas piece yourself before? I haven't heard it at all. And I was looking at its entry over at [the web site of music publisher] Universal Edition—is it's score a verbal score that has both musical and performance instructions?

Yes. I've never seen or heard it before. And you're exactly right. The score—the one that I have—is 19 pages of German instructions. So I spent about two weeks translating everything form German into English because none of us speak German. And there's almost no music [notation] whatsoever. There's one section of the piece where he wants us to quote a chorale by a Renaissance composer, so he writes that out. But even then he writes out the notes and asks us to do stuff with it but it's all verbal directions. So it's actually very open to interpretation and I think that's why it's kind of exciting. No two quartets could play it exactly the same way.

How has the preparation for it been? Do you rehearse in total darkness? I'm just curious because I imagine you're having to learn how to do it without visual cues.

Well, right now we've been trying to figure out exactly how we want it to go. Like I said, he leaves it up to us a little bit. He gives us, basically, cells that are letters A to Q and then we order them however we want. And the whole piece is based off of these—he says, "This is an invitation and one person in the group initiates the invitation." And then the other people respond and that's how you move from letter to letter. So we've been figuring out how we want to go about that.

And then when we are rehearsing we don't necessarily turn off the lights but we sit in the four corners of whatever room we're rehearsing in with our backs to each other so we can't see anything. And we just face the corner and we end up screaming at each other, "Argh—I don't know where we are!" [laughs]

Just the idea of having the performers and the audience being in total darkness sounds really fascinating to me. It puts everybody, as a group, in a very isolating situation. I don't speak German at all, but I assume the title alludes to the Catholic Holy Week masses and services, so I'm assuming it's going for the intense, that it's going for a pretty intense emotional area.

I'm expecting that it's going to touch a lot of people in a very intense way. It's very disconcerting to turn off the lights and to sit there and not have any visual stimulation at all. And then you add to it all these sounds coming from you don't even know where at that point. And it's supposed to last anywhere from 25 to 45 minutes, so I think it's going to be a really crazy experience. I'm looking forward to experiencing it myself.