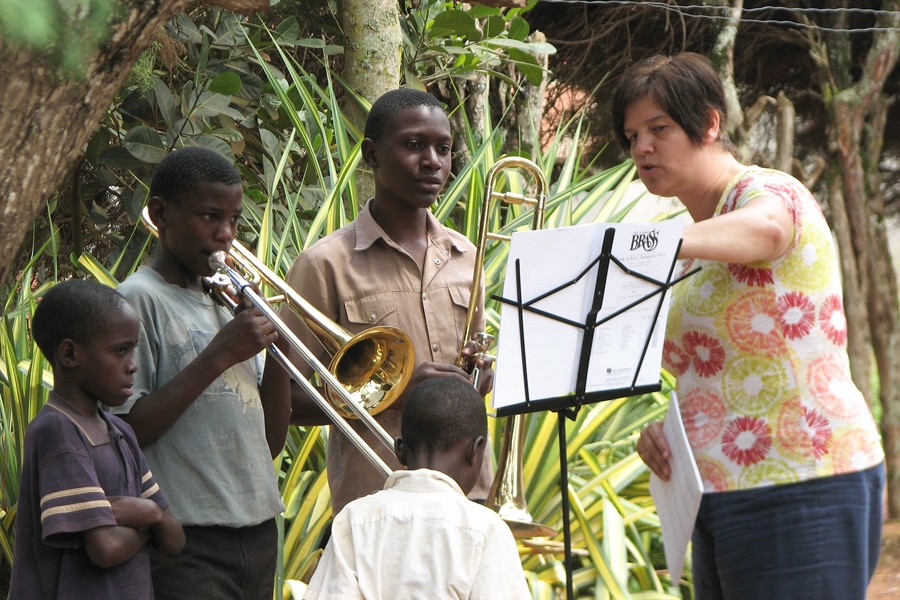 Image caption: Alison Wells, Peabody faculty cellist, works with young musicians in Uganda during a visit to the country in the summer of 2011.

The tuba, possessing the lowest pitch, is the largest brass instrument, its bell looking like a large, shiny dinner plate lurking over the tubaist's head. And in 2011 Amy Klosterman boarded an airplane bound for Uganda with a tuba as one of her checked bags.

"Ethiopian Airlines was quite nice," Klosterman laughs. "It broke down into two parts and they didn't charge us any oversized [baggage] fees. I told them what it was for and they were very understanding. Everything we've taken has been just through the baggage."

Klosterman is the founding director of The Uganda-Baltimore Alliance (TUBA), which brings instruments and music instruction to young Ugandan musicians in the rural villages of Kikajjo and Masanafu, south of Kampala. Three days before returning to Uganda on Dec. 16, Klosterman sat in the living room of Alison Wells' home smilingly recounting the winding road that now finds her heading back to Africa with three Peabody Institute students in tow. A Peabody piano alumna, Klosterman was teaching at the Baltimore School for the Arts in 2007 when, while doing volunteer work in Uganda, she met young musicians who were learning brass band music by ear. They wanted to learn to read music and needed some more instruments. In 2008 she returned with some trumpets, and in the years since has brought along trombones, drums, and, last year, the tuba. In 2011 she left her teaching position and formed TUBA to devote more time to the effort, and Wells, a Peabody faculty cellist, is TUBA's chair of the board. Wells and her 16-year-old daughter, Olivia Sharkey, a clarinetist, joined Klosterman on a trip to Uganda in the summer of 2011.

Presently, Klosterman and three Peabody undergraduates from the Eastern Edge Brass Quintet—trumpeter Emily Korth, French horn player Liz Fryer, and trombonist Frankie Yu—are in Uganda working with the members of the Toru Stars brass band and blogging about the three-and-a-half-week experience over at EEB Trio in Uganda. They return Jan. 9.

TUBA has two main goals. The first is to increase the young musicians' music literacy and skill level so they can expand their repertoire to make the Toru Stars band a professional unit. Brass bands get work in Kampala, playing weddings and other social functions, which provides genuine employment opportunities for the young musicians, who range in age from 12 to their mid-20s.

"That was the purpose of them wanting to read music, so that they could get a wider range of repertoire," Wells says. "That's actually a very unique thing about this band compared to all the other bands in the neighborhood who will do it by ear. Bands are pretty big in Uganda and so there's a lot of work, potentially. There's also quite a bit of competition. But they really are showing that they can do something unique."

The second, longer-term goal is to provide the social, organizational, and leadership opportunities for the musicians to create a self-mentoring program and self-sustaining band.

"Some of them are really committed to this as their future, just that sort of sense that they can do something totally different," Wells says. "For others it will be a passing through, learning some skills, and moving on to something else. It's nice that even in that sort of sense [the band] is helping them grow up and develop social skills and provides an outlet where they don't have to worry about their living conditions or what's going on at home."

Adds Klosterman: "We hear from [the musicians] that just being in the band has taught them how to talk to each other, just to have friendships. I think they get so isolated. They're all subsistence farmers out there so all the young people get put to work and their [social] circle is so, so, so small. And some of this is just some basic things, like, 'Oh, I have friends now. I have a way to socialize. I have a way to communicate.'"

This idea of music as the lingua franca for cultural exchange is one of the reasons Klosterman is excited to be bringing the Peabody students over to work with the band. It's one thing to learn from experienced adults how to do something. It's a different feeling to collaborate with somebody who could be a peer to realize a goal.

"Ever since I have gone I really wanted to create this [Uganda-Baltimore] network because I love that thought of students being teachers already," Klosterman says. "I've been meeting with [the Peabody students] every week since we've decided they're going and they've done a great job at pulling together materials and forming a three-week curriculum. So there will be three days in one village, three days in another village, and we'll go back and forth like that and offer the same classes. And they're doing some really basic music theory, ear training, and they're going to work with a group on marching because they haven't done any sort of formal marching."

TUBA is already seeing results. Klosterman says she's witnessed the band improve and the Toru Stars get paid gigs, and a few of its more seasoned players are getting hired by more established Kampala bands.

"They play wedding functions and church functions, and they played for the Kabaka, which is the Ugandan equivalent of the king," Klosterman says of the Toru Stars. "They had an opening of a new taxi park and the band got hired to play for that. So they are getting their name out a little bit. And I think once we set up a more reliable structure for them and upgrade their uniforms, I think they're really going to have a great band." 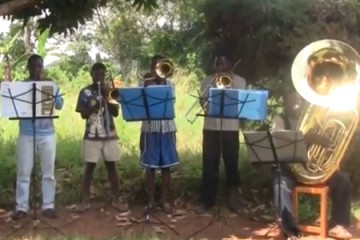