Rohina Malik found her playwright's voice in a far too ordinary act of fear. She's Pakistani-American and chooses to wear a hijab, the traditional head covering of Muslim women. And while attending her best friend's Pakistani wedding after Sept. 11, 2001, she was approached by a guest from a wedding taking place at the same venue, an American who immediately made assumptions about Malik based entirely on her appearance.

Malik wasn't new to feeling different from others. Born in South London to Pakistani parents, she grew up surrounded by people from a variety of cultures and religions. She emigrated with her family to the Chicago area when she was 15 in the early 1990s, graduated from DePaul University, and married and had the first of her four children in 2001. But after Sept. 11, there was something more accusatory in being seen as Muslim. Malik was one of them. Enemy. Terrorist.

When Malik enrolled in a solo performance writing class in 2008, she used that fraught encounter to create a character, a Pakistani dressmaker with a store on Chicago's Devon Avenue who experiences the wedding affront. Soon Malik found herself creating other westernized Muslim women characters enduring intolerance: a Moroccan-American lawyer, an African-American revert, an owner of a Middle Eastern restaurant, a West London rapper of South Asian descent. They became her theatrical one-woman debut, Unveiled, which Malik performed at Chicago's 16th Street Theater in 2009 to a sold-out run.

Malik brings the play to the Homewood campus Nov. 12 as part of her guest artist visit to the Johns Hopkins University co-sponsored by the Digital Media Center, Homewood Arts Program, Campus Ministries, Office of Multicultural Affairs, and the Women, Gender and Sexuality Studies Program to explore diversity within the Muslim community. 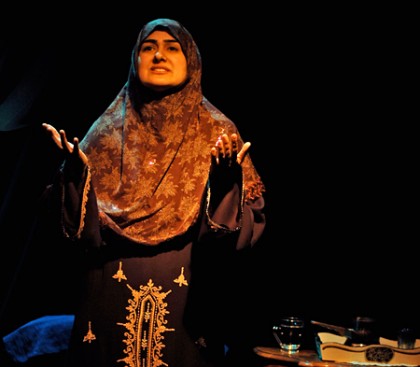 Unveiled unfolds as a series of monologues while each woman drinks tea and talks about her experiences. The setup creates an intimate setting for funny, moving, and tense personal stories. Malik is chameleon-like enough to give each woman different accents and mannerisms, particularly the flamboyant Shabana, the British rapper, whose streetwise slang and underclass swagger make this young Muslim woman's life feel as familiar as that of any young hip-hop artist in a music magazine. It's an approach that collapses the chasm separating the proverbial "us" and "them," which can elicit potent results. In a video interview segment with Malik about the play, a young man emotionally admits his ignorance of Islam, confessing that prior to seeing Unveiled he thought the hijab was a symbol celebrating the Sept. 11 attacks on the United States.