Award given to creative young faculty in science, engineering

Johns Hopkins University chemist Tyrel McQueen has been awarded a 2012 David and Lucile Packard Foundation Fellowship for Science and Engineering, given annually to unusually creative young faculty members in science and engineering. 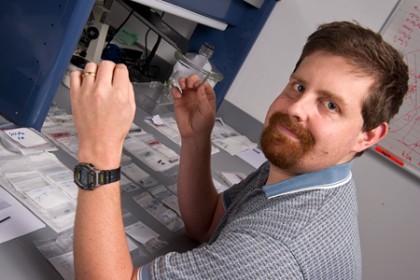 McQueen's fellowship is one of 16 awarded each year nationwide, and bestows unrestricted funds of $875,000 over a five-year period. McQueen will use the award to continue his work toward discovering, designing and controlling materials with exotic electronic states of matter, with applications ranging from fundamental science to solving energy problems.

"I am delighted and honored to receive this award from the David and Lucile Packard Foundation," said McQueen, an assistant professor in the Department of Chemistry at the Krieger School of Arts and Sciences. "I'm excited to see generous support for new materials synthesis and solid state chemistry, and the flexibility offered by these unrestricted funds will be invaluable to my research team as we pursue exotic new quantum phenomena in electronic materials."

Katherine Newman, dean of the Krieger School of Arts and Sciences, said she considers the recognition well-deserved.

"The Krieger School is enormously proud of the accomplishments of Professor McQueen, and we look forward eagerly to the discoveries he will provide in the years to come," she said. "I have had the personal pleasure of hearing him lecture undergraduates on his work and he conveys the kind of excitement that we want budding scientists to hear. We are grateful to the Packard Foundation for recognizing this rising star."

McQueen, who is also an assistant professor in the Department of Physics and Astronomy, earned a bachelor's degree in chemistry from Harvey Mudd College in 2004, a master's degree from Princeton University in 2006 and a Ph.D. in chemistry and materials from Princeton in 2009. Later that year, he became a postdoctoral researcher at Massachusetts Institute of Technology before coming to The Johns Hopkins University as an assistant professor of chemistry. He is a member of Johns Hopkins' Institute for Quantum Matter, which is funded by the Office of Basic Energy Sciences of the US Department of Energy.

"This is tremendous news and we are all very excited for Tyrel and proud of his accomplishments," said Gerald Meyer, chairman of the Department of Chemistry. "It will be exciting to see what fascinating new science emerges from this fellowship."

McQueen is a member of the American Physical Society, the American Chemical Society and Sigma-Xi Scientific Research Society. Previous honors include a National Science Foundation Graduate Research Fellowship (2004-2009) and the 2012 Lange Lectureship for Outstanding Accomplishments in Materials Research from the University of California, Santa Barbara.

The David and Lucile Packard Foundation established its fellowships in 1988 to cultivate future scientific leaders.