New York Mayor Michael Bloomberg, a Johns Hopkins University alumnus, donated $120 million to the new Johns Hopkins Hospital building, which opened in April. Much of Bloomberg's gift went to the pediatric wing, named the Charlotte R. Bloomberg Children's Center after the mayor's mother, who died last year at age 102. But he also helped finance the art that brings color and energy to other parts of the hospital.

Bloomberg talked about his contribution and the important role art plays in the new hospital building in an interview with Architectural Digest.

AD: What is the role that art plays in the hospital?

MB: When I first got involved with this project, I saw it as an opportunity to design not just a world class hospital, but also an urban building that incorporates art and design thoughtfully and with attention to detail. 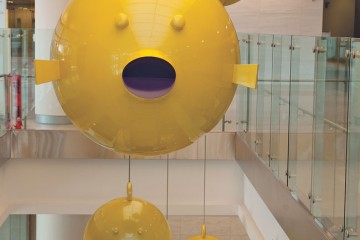