Johns Hopkins center will support next generation of military aircraft

A team of Johns Hopkins engineers has been selected by the U.S. Air Force to start a new materials research Center of Excellence that will develop novel computational and experimental methods to support the next generation of military aircraft. 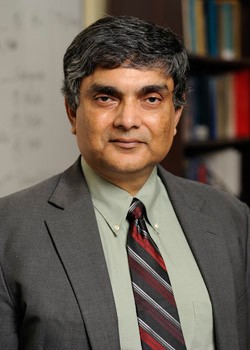 The Center of Excellence on Integrated Material Modeling (CEIMM) will advance the Air Force's Computational Integrated Materials Science and Engineering Initiative. Their research will contribute to the design of high-performance devices and components in future aircraft structures and turbine engines.

The center brings together the nation's top academic, military, and industry researchers under a $3 million U.S. Air Force award. Somnath Ghosh, the Michael G. Callas professor in Johns Hopkins' departments of Civil Engineering and Mechanical Engineering, is the new director of CEIMM. "We'll start by understanding existing materials from the atomic scale all the way to the structural scales through state-of-the-art research, and then we'll move to designing a new generation of advanced aerospace materials," Ghosh said.

Researchers will focus on advanced computational and experimental methods of determining how different materials respond to different levels of loading and temperatures that can cause failure in aircraft engines and other components. The center will operate within the Hopkins Extreme Materials Institute (HEMI) which opened earlier this year. "With the establishment of HEMI, and now this center, we have pulled together the nation's leading academic, industry and military leaders to pave the way toward a 21st century generation of materials," said Nicholas P. Jones, Benjamin T. Rome Dean of the Whiting School of Engineering. "This mission is critical to the nation's security, and we are proud to play a key role."

The center and institute will share some staffing and infrastructure. Although they will initially operate within existing space, both will be relocated to Malone Hall, a 56,000-square-foot research building. The new building will be completed in 2014.

At CEIMM, researchers will focus on advanced computational and experimental methods of determining how different materials respond to different levels of loading and temperatures that can cause failure in aircraft engines and other components. Researchers will construct three-dimensional representations of aerospace and engine materials, from atomic configurations and beyond. Virtual tests will be conducted with powerful computational models to determine, for instance, how cracks form, what causes materials to change shape and how well materials stand up to repeated loadings.

These computational models may bear some resemblance to those used in computational medicine, in which scientists test drugs and study medical disorders with software instead of living subjects. "The idea is that this allows you to cut down on expensive lab experiments," Ghosh said. "In the computer you can mimic what real experiments can do."