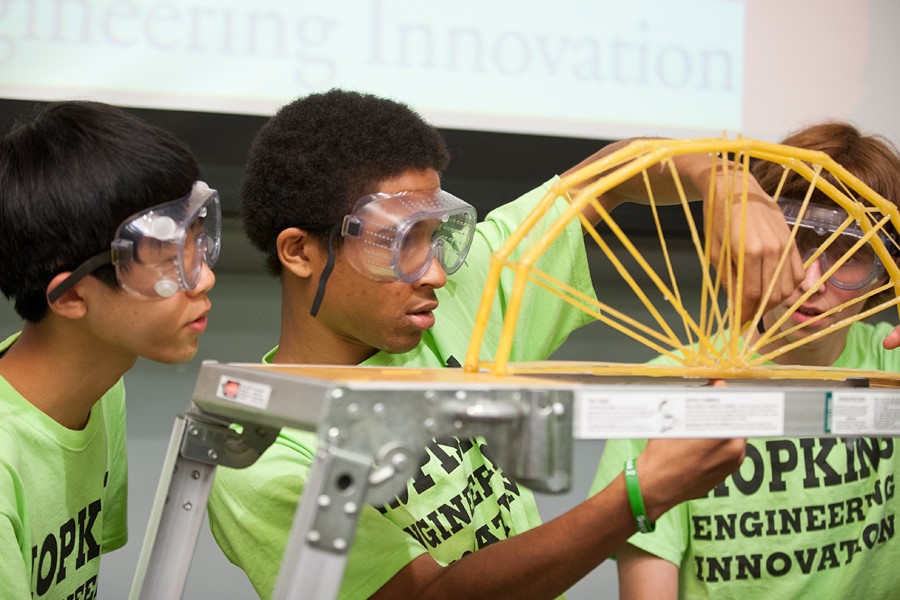 The members of the MCL Bridge Design Company took the stage and stood behind their creation. The bridge was relatively simple—not too high, thicker at the top. Matt Bailey, Clara Nelson and Lucy Li (MCL, for short) grimaced as weights were hung from its decking. The weight to beat—30.8 kg (67.7 pounds)—was written on the scoreboard.

"Twenty-four kilograms," the judge announced. Silence. "Thirty kilograms." "That's a child!" an audience member whispered. The room held its breath as more weights were loaded on. Finally, "48 kilograms!" Five seconds passed. And then, the inevitable cracking and crashing sound of a half pound of pasta coated in epoxy and 105 pounds of free weights hitting the floor. The crowd erupted.

The MCL team members were among the 120 high school students, accompanied by family and instructors, who filled JHU's Hodson Hall auditorium in late July for the Spaghetti Bridge Contest. The event is the culminating project in Engineering Innovation, a four-week summer program for rising high school juniors and seniors. Students worked in groups of threes during the competition, which gave them a chance to put their engineering and math skills, and theories learned in lectures and labs, to practice.

Engineering Innovation, run by the Whiting School of Engineering, is offered at the Johns Hopkins Homewood campus and at sites across the country. Its intent: Give students a taste of college-level engineering, and get them interested in studying science, technology, engineering and math (STEM) fields when they go to college.

The program has been a terrific success. Since its inception seven years ago, 78% of Engineering Innovation's graduates have gone on to major in STEM fields in college (compared to a national average of 16%). MCL went on to win this year's bridge competition. For Li, a high school senior from China, the victory affirmed her recent decision to pursue engineering in college. "My parents are both engineers," she said, "but before this, I didn't really know what it meant to do engineering."