Slavin sees need to change the way we teach

Director of the Center for Research and Reform in Education advocates for new methods, incorporation of multimedia 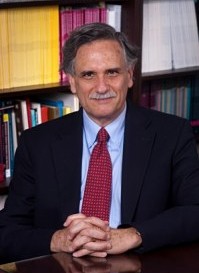 A "strong social conscience" permeated Robert Slavin's college years in the late 1960s and early '70s, and he began to view education "as a means to social justice, as a means to help poor and disadvantaged children be full participants in society." That passion has never dimmed, and today, Slavin is at the forefront of education innovation.

"When you see what children face and what schools so often give them, it makes you angry," he says emphatically. "It makes you impatient....So a large part of what really motivates us is the sense that it doesn't have to be this way."

Slavin, director of the Center for Research and Reform in Education, has an undergraduate degree in psychology and a Ph.D. in social relations, so he didn't receive the usual indoctrination. By now it's too late. He is absolutely insistent that the traditional way of educating children must change.

As center director, and co-founder and chairman of the Success for All Foundation, he works with his wife and other colleagues "to design schools that will be successful with all children, particularly elementary schools serving many children at risk." He wants to reach young learners before they hate school and have lost confidence in their ability to succeed.

The Success for All program, Slavin says, "contains within it hundreds of innovations, as well as, in a sense, being an innovation overall." He and his team introduce a variety of educational tools, including cooperative learning, phonics, teaching "learning to learn" skills, tutoring for struggling readers, and parent involvement.

One approach involves "embedded multimedia," in which small but compelling bits of video are woven into a teacher's lessons to illustrate key concepts. Puppets, for example, introduce mathematical ideas and argue about how to solve problems. A detective, Shirley Lock Holmes, solves mysteries using mathematics. Video characters teach letter sounds and help young pre-readers learn to blend them successfully into words.

For older children who may be reluctant to read a novel, the program introduces the story through a motivational "backgrounder" video styled as a movie trailer. The technique, Slavin says, "gets the kids eager to read the content."

The new teaching methods can be successful only in the hands of willing educators, and the 200 staff members of the nonprofit foundation interact with teachers and administrators in more than 1,000 schools across the country. Slavin admits that for many years, "teachers and technology have been oil and water," but he maintains that embedded multimedia can creatively enhance what the teachers present. "We listen to them very carefully," he says. "A lot of this has to do with understanding the needs and the ideas of the people who are closest to the children."

Although Slavin considers himself a "technology conservative," he sees the potential of technology to "solve enduring problems of teaching and learning." He forecasts the disappearance of the textbook and believes that once every student can access technology, the possibilities "are just endless."

Slavin cautions that good teaching cannot be taught "in a workshop on Saturday afternoon." Instead, he says, it's "something you develop over your whole life as a teacher." His aim is simply to help teachers be as successful as possible. Before his program is introduced into a school, at least 75 percent of the teachers have to vote in its favor. "Then teachers are very involved in the implementation," he notes.

Working with schools presents opportunities for innovative research, and Slavin puts ideas "to the test to find out what really works and what things we should set aside." In 2010, he was selected by the American Educational Research Association as one of its fellows, "chosen in recognition of their exceptional scientific or scholarly contributions to education research."

The field of education, however, has generally been disinclined to embrace research. "Education is very strange in that it does not have a tradition of paying any attention to evidence," Slavin observes. "I spend a lot of time advocating for the whole concept that evidence should matter in education."

Slavin appreciates the leavening influence of talented young educators from such programs as Teach for America, saying they "shake up the system and provide new energy and ideas." But he asserts that "the unit of change is the school, not the individual teacher."

His goal is to effect change and influence policy on a large scale by creating methods that can be widely replicated. His position at Johns Hopkins, he says, has been invaluable. He cites the creation of the Center for Social Organization of Schools, "which the university very much supported and encouraged, even though it was not at all the ordinary academic kind of agenda." Once he had results from "good science," the university urged him to "get out in the community and make a difference."

That, of course, was his objective all along.