Cooper has a different way of looking at health care 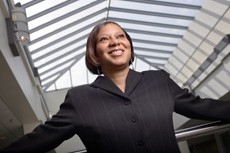 Image caption: Physician Lisa Cooper, who was born in Liberia, has made an international name for herself with her health disparities research.

"I had a sense from early on about how opportunities and privilege affect your life," says Lisa Cooper, M.D., M.P.H., the James F. Fries Professor of Medicine, as she reflects on how growing up in Africa laid the foundations for her remarkable studies of disparities in health care. As a young child, Cooper attended an international school in Liberia, an opportunity that was available to her as the daughter of a surgeon. Yet, all around her, she saw poverty, and "a lot of kids on the street who weren't as fortunate." This core sensitivity to the world surrounding her has remained with Cooper. After leaving Liberia to attend university in Switzerland, she eventually found her way to Baltimore, where what she saw in the inner city was similar to what she had seen in Liberia. "People were having the same kinds of struggles."

What distinguished her early work was the ability to recognize more than what was on the surface. As Cooper took care of patient after patient with chronic diseases, she became frustrated. The "reasons that people were sick had nothing to do with the actual illness they had. It had to do with everything else—where they lived, what kind of job they had, whether they had family support or not, whether they had money or insurance." While she recognized that these factors were essentially beyond her control, she also knew that social conditions deeply impacted the health of her patients and their response to disease. Cooper recognized that this entire world lying beneath the surface may actually hold the answers to explain the disparities that she observed in health care.

This instinct led her to pursue a master's degree at the Bloomberg School of Public Health at Johns Hopkins, where she began to understand the "importance of having research training and skills in order to be effective at making change." Her first efforts to obtain significant funding were met with disappointment when she failed to receive an NIH grant to create a center for the study of racial disparities. Although initially she was devastated, she used her disappointment to reassess. She realized that the study of disparities could also be critically important for understanding medical conditions such as cardiovascular disease. Studied in this way, disparities were a focal lens to gain insight into a very broad problem. For this approach, Cooper was awarded with her first large NIH grant in the late 1990s, and she hasn't stopped since, receiving international recognition for her work, the scope of which continues to expand at an impressive rate.

In describing her work, Cooper is extraordinarily modest and humble. "When I think about some of the things that I've done, I don't feel that they were something completely brand new," she says. Instead, she emphasizes that her work "put together the pieces in a way that they hadn't been put together before." She gives a typical example: "One of my mentors is an expert in doctor-patient communication. But she hadn't really been focused on how race, ethnicity, and culture affect doctor-patient relationships." It is this type of collaboration, she believes, that increases creativity, with individuals whose diversity extends to "where we grew up," all culminating in the production of different ideas that may lead to something new.

Cooper relies on her instinct as much as her analysis when evaluating whether an idea is important. In many cases, she finds that the best ideas are the products of good fortune and serendipity, and then having the sense to recognize when something is important. In this case, such an intuition has had a tremendous impact, leading to a fundamental reorganization of how we perceive the environment in which health care is delivered. For Cooper, this process has at times seemed extraordinarily simple. "Sometimes you just have an instinct," she says. "Something about it sounds interesting. You don't really even know exactly what that is yet, but you just go with it."