The art of innovation made manifest in music

Jazz saxophonist, Peabody department chair Gary Thomas discusses his roots in music and the development of his sound 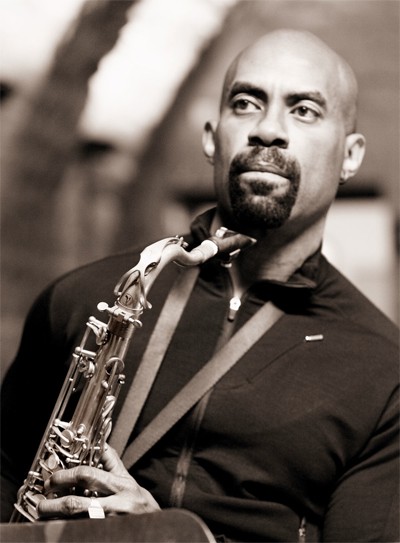 A remarkable thing about renowned jazz saxophonist Gary Thomas, founding faculty member and chair of the Jazz Studies Department at the Peabody Institute: he did not touch a saxophone until he was in high school.

In fact, Thomas had no musical background of any kind—and no exposure to music as a child—until the age of 14. That's when he started playing flute as a way of avoiding household chores after school. His mother, a force in his life who made sure he got a good education beginning with mandatory trips to the library in kindergarten, declared that sitting in front of the TV all afternoon was "not beneficial" and she would find something for him to do. Thomas headed to after-school band practice instead. "I wasn't really that interested in playing music," he remembers. "I grabbed the flute because it was small and I figured I wouldn't have to tote something that was going to kill me all the way home. So I started playing the flute and somehow it took to me. Or I took to it."

Once he started playing, Thomas became obsessed with the idea of learning how to play well. He practiced non stop—a characteristic that has defined much of his life, both in and out of music, ever since. "I find something and I try to work on it forever," he says of his singular focus, "just to figure out what the possibilities are." It is a focus that is key, he says, to jazz improvisation, the art of innovation made manifest in music.

Within one year of first touching an instrument, Thomas (who was raised in Baltimore's Cherry Hill neighborhood) received a scholarship to study classical flute at the Peabody Prep, the culmination of a promising if unusual launch to a musical career. As Thomas recalls, "I just think that maybe I might have just been lucky, lucky enough to find my calling on a fluke."

Later in junior high school he took up the clarinet as well, but as he got older he increasingly found himself drawn to the saxophone. "I had friends who were playing in these pick-up bands, playing music of bands like Earth, Wind and Fire; Cameo; Parliament-Funkadelic—I wanted to do that," he says. His flute instructors, needless to say, were aghast. "No one would let me because they were trying to protect the integrity of my flute sound." But opportunity arrived his first day of band practice as a brand new freshman at Baltimore Polytechnic Institute, the city's science and mathematics magnet school. Thomas remembers the band instructor walking into the classroom and asking who played the saxophone. "Right away, I just threw my hand up. Of course it was a big lie, but finally I had the saxophone that I wanted."

Four years later, as a freshman at Howard University, Thomas had the good fortune to cross paths with gifted classmates—esteemed jazz musicians Greg Osby and Wallace Roney. They helped him realize that if he wanted to learn how to play the saxophone, he would need to listen, transcribe, and learn. His goal was simple—to be the best saxophonist that he could. "There's a specific language that you have to learn if you're going to be a jazz saxophonist," Thomas points out. "From that point, once you develop the language, then you can take it wherever you want it to go." He recalls his early attempts at jazz improvisation with some amusement. "In the beginning, it was all random. I thought that improvisation was just making sounds, free, whatever," he says. "But there was no order to what I was playing. It was just sound. It was like baby talk."

Once Thomas understood the real level at which his college classmates were playing, he channeled his enormous self-discipline into a grueling schedule of daily practice, getting up at 3:30 in the morning in order to get in four hours of practice before his first class. "I would go to class for a few hours and then spend the rest of the day filling in the hours by practicing. I did that religiously," he says. But Thomas' music studies were interrupted when his family could no longer afford to pay for college. After his freshman year he had to leave Howard University. He briefly joined the Army but left after an injury during basic training, resulting for a time in an arm that was partially paralyzed. For several years he worked menial jobs and got by on pick up gigs around Baltimore. A chance encounter with former Howard classmate Greg Osby—who was building his career touring on the road—led to work with legendary drummer Jack DeJohnette and subsequently a two-year touring gig with the "Chief"—jazz icon Miles Davis.

But it was DeJohnette who really helped Thomas learn to dance at the precipice of musical innovation. "The thing with Jack was the best of all possible situations for me to be in because he encouraged experimentation," Thomas says of this extremely fertile period of his youth. "If you weren't really pushing the limits, then it upset him: 'We got to try this thing or you've got to try that.' We'd be out on the road with great musicians, but we were just experimenting so much that sometimes we were just train wrecks in front of audiences. That was Jack's whole thing. He said, 'We've got to keep pushing. There has to be more. There must be more.'"

But what that more was, exactly, was never quite defined—suggesting perhaps that the chief focus of the innovative spirit is the journey itself. "I don't know [what DeJohnette was searching for]," reflects Thomas. "I think some people have that spirit, though. They're just looking for something that's different from what everybody else has."

After traveling and playing around the world with the world's greatest jazz musicians for most of his adult life, Thomas started feeling the effects of the road. In 1997 he was invited to Peabody to found and chair the new Jazz Studies Department, which for more than a decade has flourished under his leadership. He has relished the challenges of this position, which have been many, although it has been admittedly at the cost of his ability to concentrate on the saxophone full time. In a sense, he has transferred the development of his own capacity for improvisation to the development of this capacity in his students. He sees the value of improvisation not just for jazz musicians, but for everybody in any area of life—particularly students who can benefit from mental flexibility and adaptability.

Throughout his career, Thomas has stuck to his roots as a Baltimore native, never straying north to live in New York like so many other prominent jazz musicians, a fact to which he attributes the development of his sound. "I don't know when I actually achieved my sound, but I think one of the reasons why I sound like I do is because most of my peers were going to New York, but I didn't." Although Thomas is widely regarded as a major innovator on the saxophone and has immersed himself in unusual musical concepts such as asymmetrical scales, he remains clear about the importance of traditional approaches. "So many people are looking to find something new. I think they lose sight of what's actually musical too. I think the point in the end is to play music."