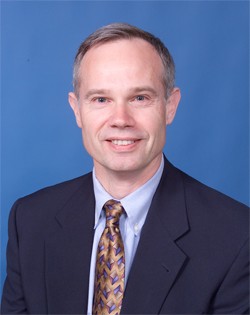 On long flights returning from Europe or Singapore, Jerry Krill engages in an unusual hobby. While the stranger in the next seat is watching a movie or working on a laptop or idly flipping the pages of the SkyMall shopping magazine, Krill will sit staring off into space, quietly inventing things in his head.

"Eventually I will write it down," says Krill, Ph.D., who serves as the Applied Physics Laboratory's assistant director for science and technology. "I will then submit it to the APL Technology Transfer Office." Sometimes his invention will get built, and sometimes the idea is deemed impractical. "Maybe it's not a good idea in this era, but maybe in 10 or 100 years it will be," is how he describes it. But no matter if it's for this age or the next—Krill is a prolific inventor and innovator. He currently holds 18 patents as sole or co-inventor, with three more pending "to my knowledge," he cautions, ever the accurate scientist. "I also have over a hundred invention disclosures, I believe, but I've lost count," he says of the initial step in the formal process of turning an idea into a patentable device, product, or system.

Krill's expertise is in microwave devices, and many of his patents come from his work on projects for the U.S. Navy in that area; but his interests are far-ranging enough to include original inventions in plastic electric motors and transmissions, optical wireless communications, security sensors, and a 3D walk-through display that earned an Invention of the Year award from APL. He came to such diversity of interests naturally. "I grew up on a working dairy farm. I was bored a lot on a tractor in the field," he recalls. "I learned to daydream. I was studying astronomy at the age of 5. I was plotting my escape."

Arriving at APL in the early 1970s, Krill soon came to appreciate how essential collaboration was to successful innovation. "I've spent much of my career learning how I could bring in new ideas and help usher other people's ideas forward," he says, "so that weak flame of a new idea is not extinguished before it's had a chance to be examined—and perhaps, nurtured."

Over the past two decades an extensive literature on innovation has sprung up, and Krill says that he's read most of it. He observes that one dilemma consistently identified throughout the literature is the resistance of individuals and groups to change. "I read recently that all great ideas and truths have three phases," says Krill with a generous laugh won through hard experience. "First, they're rejected out of hand as ludicrous. Second, they're actively resisted. Third, they're accepted as obvious."

So in one sense, it's Krill's job to bring people to the obvious. But that's not an easy task—think Galileo and Darwin—and is perhaps only achieved by fostering the flexibility of mind and risk taking that define innovative organizations. "I believe that innovation goes beyond creativity to actually build something of value to a user," he says simply. "That's my working definition of innovation." The special challenge when leading teams or groups or an entire organization to innovate is what Krill identifies as the critical need to avoid numbness-through-routine. "You can create solutions, but then you have to innovate every day to finally get there. You have to combine creative, free thinking with the discipline of engineering and science to make it really happen."

Krill was tasked with advancing innovation at APL by director Ralph Semmel, who created the senior post of assistant director of science and technology in November of 2010 specifically to foster collaborative thinking and broaden the role of science and technology at the Lab. What he did not do, however, was tell his appointee exactly how to achieve these goals. "First of all I examined how did I innovate? How did I come up with new inventions?" says Krill of his first days on the job. "I realized there are certain key ingredients." Primary among them were resources APL already had in hand—plenty of smart, highly educated, and motivated scientists and a physical plant that is one of the best in the world. "We are able to build and prototype just about anything," he says. "We have amazing facilities. We can build spacecraft. We are one of only a few organizations in the country that can go from space science and theory to proposing missions, to building the spacecraft, to operating them and collecting the data. So we have those kinds of capabilities."

What was needed, Krill came to conclude, were more formal and informal channels of communication to let people collaborate freely. "The flow of ideas is a key ingredient," he says. "No new idea is born out of a vacuum. It's all based on previous ideas, connecting what appear to be dissimilar facts and information, increasingly from across disciplines that do not seem to be related at all." One of his early efforts at fostering collaboration across the 400-acre APL campus is a program called Ignition Grants, in which all staff members are encouraged to submit inventive ideas for discussion and review by their peers. A winnowing process eventually leads to a vote by the staff themselves for the best idea, which is then funded with a seed grant ranging from $10,000 to $20,000. "We were not prepared for the wealth of great ideas that came out of this, right from the beginning," he says. "The number of intellectual property disclosures—these are our inventions—went up significantly just by that activity. We're at an all-time high for intellectual property disclosure, and we believe that this was a major factor."

But Krill observes that there is another ingredient to innovation that doesn't get mentioned as much and often does not make it to the literature—trust. "Sometimes the panic of trying to make something happen can inhibit free thinking," he observes. "Time and time again, I would see a spacecraft with some piece of its anatomy that's just not coming together, or some radar system involving a new special component that just doesn't seem to be calming itself down and working. People are under stress and feel the pressure. At that critical time, we need to give them the trust, make sure they have the resources, and let them do their jobs. In my experience, that has brought more success and more creative resourceful thinking than almost anything. In the end we have to trust the staff to solve it. And they almost always do!"