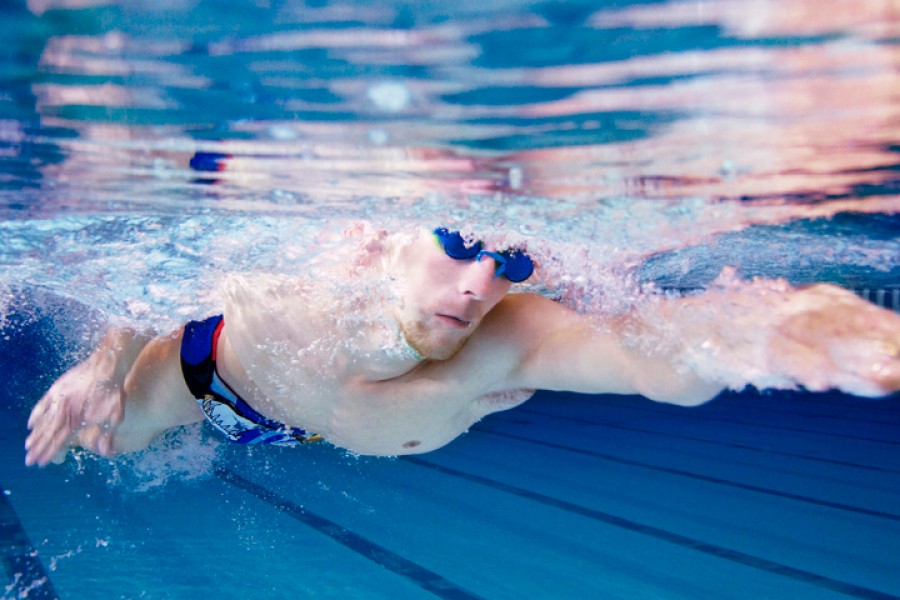 Image caption: Research conducted by Rajat Mittal, a professor of mechanical engineering, determined that the deep catch freestyle stroke, in which the arm action resembles that of a paddle, has the edge over sculling, a bent-arm, propeller-inspired motion.

Just in time for this summer's Olympic Games, engineers have settled the argument over which of two freestyle techniques used by the world's best competitive swimmers is faster.

The verdict: The deep catch stroke, in which the arm action resembles that of a paddle, has the edge over sculling, a bent-arm, propeller-inspired motion.

"This is a result that is simple but sweet, which is something we usually struggle to arrive at in research," said Rajat Mittal, a mechanical engineering professor at The Johns Hopkins University's Whiting School of Engineering. "The deep catch stroke is more efficient and effective than the sculling stroke."

Mittal's team started with high-precision laser scans and underwater videos of elite swimmers. The researchers then used animation software to bend and otherwise change the shape of the scanned static arm in such a way as to match the video sequence. This software allowed the researcher to insert a "joint" into the arm so that the limb could be moved in a realistic manner. The team then ran computer simulations to study the flow of fluid around the arm and the forces that acted upon the limb. Each simulation involved about 4 million degrees of freedom and required thousands of hours of computer processing time.

The findings concerning the deep catch and sculling strokes were featured in the doctoral thesis of Alfred von Loebbecke, who studied under Mittal, and in a report by Loebbecke and Mittal that has been accepted for publication in the Journal of Biomechanical Engineering.

Mittal, a recreational swimmer, joined the Johns Hopkins faculty in 2009. His research into motion through water began almost a decade ago when, while based at George Washington University, he was awarded a U.S. Navy grant to figure out how fish use their fins to swim so well. To tackle this task, Mittal's team developed software and computer models to study the movement of marine animals.

Mittal later contacted USA Swimming, the sport's national governing body, to see if he might use these high-tech tools to crack the secrets of elite swimmers. Russell Mark, the biomechanics coordinator of USA Swimming, was intrigued, and provided Mittal's team with underwater videos of top swimmers and startup funding. With this support, Mittal and Loebbecke collaborated on studies of the "dolphin kick" that is used in butterfly events and, increasingly, during starts and turns in freestyle and backstroke races.

After completing that study for USA Swimming, Mittal's team turned its attention to the debate among top coaches about the merits of deep catch and sculling strokes.

Outside of competitive swimming, Mittal's findings could be useful in designing exoskeleton suits that the U.S. Navy is seeking to help elite military forces swim more quickly and efficiently. At the same time, Mittal said, the research could have more down-to-earth applications by steering recreational swimmers toward the most effective strokes.

"People sometimes stop swimming because they feel they are not doing it well enough," he said. "If this research can help recreational swimmers swim more effectively and feel better about their swimming at an early stage, I think that could have an impact on health and fitness."