A recent report from the Johns Hopkins 21st Century Cities Initiative finds that Baltimore's roughly 15,000 vacant properties cost the city an estimated $210M each year in lost revenue and other costs 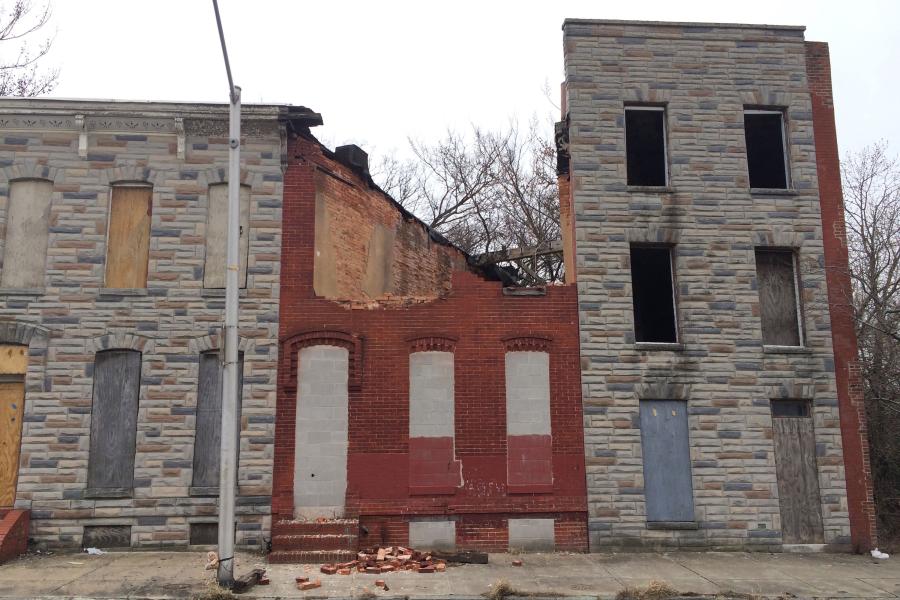 On Jan. 24, 2022, as firefighters battled a blaze ravaging a row home in Baltimore, part of the building collapsed. One firefighter, pulled quickly from the rubble, survived, but three others did not. Turns out the house—which, along with two adjacent properties, was later demolished—had been sitting vacant for more than a decade.

"The lives lost, you can't put a price on that," says Mary Miller, a Baltimore resident and senior fellow at the Johns Hopkins 21st Century Cities Initiative. But The Costs of Baltimore's Vacant Housing, the report she recently co-authored with the initiative's senior program manager, Mac McComas, reveals a multitude of measurable costs associated with the city's uninhabited dwellings. Annually, for example, roughly 15,000 vacant properties cost the city an estimated $210 million in lost revenue and direct costs.

"Baltimore has the third highest rate of vacants of any city in the U.S.," McComas says, behind only Detroit and Flint, Michigan. Past attempts to fix the problem, however, have been executed piecemeal, not citywide. Today, he says, many interested parties—nonprofits, government entities, and developers—want to solve it "at scale."

"Over the last decade, [Baltimore] was the only city on the East Coast that saw a decline in population."
Mac McComas
Senior program manager, 21st Century Cities Initiative

The initiative leverages data and policy analysis to help government and private-sector entities tackle urban challenges worldwide. And the vacant housing problem in Baltimore is so extreme, fixing it could render valuable lessons. The report's research—culled from numerous authoritative sources—shows that, in 2020, it ranked last in housing appreciation rates among a group of 30 similarly sized cities. "And over the last decade," McComas says, "it was the only city on the East Coast that saw a decline in population."

These characteristics factor into Baltimore's vacancy costs, which, the authors believe, could be dramatically reduced with a comprehensive redevelopment plan. "Vacant housing is an enormous potential asset that is just sitting there and could be activated. If it were, it would have a lot of positive benefits," says Miller, a former executive for the Baltimore-based investment firm T. Rowe Price.

Among the potential benefits: revitalized neighborhoods, a stronger tax base, improved infrastructure and public health, and affordable homes for low- to middle-income residents.

Without a fix, the costs are considerable. One major cost is revenue loss caused, in part, by a weak housing market "reflecting a legacy of disinvestment in many redlined [or Black] neighborhoods," the report states. After years of falling prices, Baltimore's median home price is $235,000, compared to $400,000 nationwide. Accordingly, the city's overall tax base is low, and 35% of the owners of vacant houses are delinquent on their property taxes, resulting in a $50.6 million loss annually.

Other big losses include the income taxes that would come from residents in those currently vacant units, along with their water and sewer bills and what the report describes as "contagion," the impact that vacant units have on nearby properties. Per the report, houses positioned within 200 feet of a vacant sell for 8% to 30% less than houses farther away. Added up, all these losses amount to $109.5 million.

The city must also pay to mitigate the effects of blighted neighborhoods. Among the costs: lawn-mowing, rat control, waste removal, 911 services including police and firefighting, and the demolition and relocation associated with "properties that pose health and safety risks." The total: $100 million.

Ironically, 90% of Baltimore's vacant properties are privately owned by individuals or companies, and some are content to let their houses sit empty while waiting for values to rise. "So, the city only owns 10% of the houses and is covering 100% of the costs," Miller points out.

In nearby Washington, the city charges a punitive tax rate for vacant properties. "It's much higher than if they're occupied, so it's painful for owners," Miller says. "We don't have those sorts of incentives in Baltimore, and that's something people are interested in."

Otherwise, the key to revitalizing neighborhoods is to stem the vacancy tide. "One vacant house does not change a neighborhood," Miller explains. "But if you reach 4% of properties being vacant, that is the tipping point. Beyond that, things go south very quickly."

Citywide, the vacancy rate is 7%, with certain neighborhoods reaching more than 30%. North Avenue, an east-west thoroughfare bisecting Baltimore City, is an example of the latter. "If you start on Charles Street and drive west, the sheer scale is staggering," McComas says.

The Nation’s Vacant Homes Present an Opportunity—and a Problem

Other neighborhoods, like Harlem Park—featuring "beautiful housing stock" and a once-vibrant public park—are ripe for restoration, Miller says. But acquisition and restoration costs often exceed a house's market value. And many neighborhoods need city-funded infrastructure improvements, like repairs to roads and sewer systems, to reduce blight. One developer in Harlem Park, Miller says, is attempting to restore a handful of houses, hoping it will have a domino effect. "But it's a big risk, which is why we need more support for this to succeed," she says.

Recently, a Baltimore City Council member proposed revising the city's $1 housing program, which, in the 1970s, enabled middle-income people to buy dilapidated houses for next to nothing on the condition that they restore the properties at their own expense. A new version would help low-income Baltimoreans, in part by providing them with up to $50,000 for restoration costs. But Miller and McComas say the financial assistance is insufficient, especially in neighborhoods with high vacancy rates.

A bigger solution, one the report's co-authors have begun to discuss with decision-makers, is to create a quasi-public agency—involving government, nonprofit, and commercial entities—to oversee a program that would provide two kinds of subsidies citywide. "One for developers to fix properties, the other for Baltimore residents, to help them become homeowners," Miller says. Ideally, the program would also create a "virtuous cycle," she adds, "by employing Baltimore residents who do the work and become homeowners and renters, the occupiers of these houses."