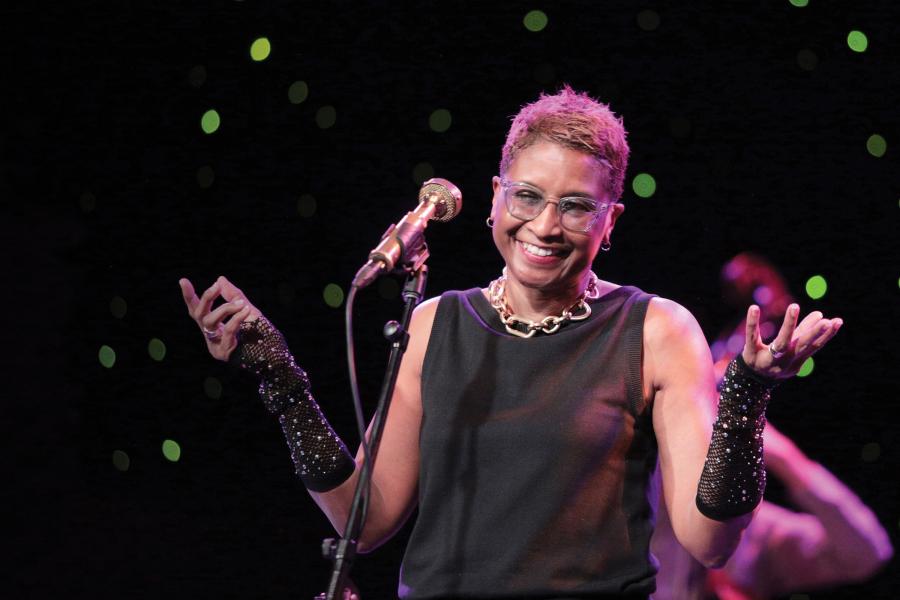 In Roman mythology, Janus was the god of beginnings and endings, "doors opening and closing, eras beginning and ending," says Paula Boggs, A&S '81. It was that duality that Boggs had in mind when naming Janus, the fourth studio album from Paula Boggs Band, out earlier this year. A blend of jazz, folk, soul, bluegrass, and blues, Boggs calls the music "soulgrass."

Janus is a creation born by pandemics—not just COVID-19 but what Boggs saw as the overlapping pandemics of racial violence and a toxic political climate.

"It was a time when I felt, personally, chapters opening and closing," Boggs says.

It wasn't the first time she had felt that way. Boggs had worked as a lawyer, including for the government and for private practice, before becoming an executive vice president at Starbucks headquarters in Seattle. "I thought I was pretty hot stuff," she says. As a Black woman executive, "I was breaking glass ceilings and all that."

But in 2005, after three years at the coffee giant, the unimaginable happened. Her sister-in-law died in a car crash, leaving behind Boggs' brother and 2-year-old niece. Boggs entered a dark place. Music brought her back.

As a child, Boggs had played clarinet and guitar, but at the time of the tragedy, she hadn't made music in 15 years. Her spouse, Randee Fox, urged her to return to music to help her grieve. So Boggs signed up for a weekly songwriting class through an extension program at the University of Washington.

Before long, she was performing at open mics and jamming with Seattle-based musicians Tor Dietrichson, a percussionist, and Mark Chinen, who plays guitar and banjo and is also a lawyer. By 2008, they were performing as Paula Boggs Band. "What is the work of my soul?" she asked herself. "What do I need to be doing to feel most fulfilled?" In 2012, after 10 years at the company, she left Starbucks to make music full time.

The band has grown to seven members. Boggs, the lead vocalist who plays guitar and ukulele, says she finds inspiration for songs in many places, including her love for her spouse, whom Boggs sings about in "A Finer Thread" and "Thirty More Years and a Day." But she keeps coming back to the idea of an American story, and whose stories get to count as American.

The most popular song off Janus is the lead single, "King Brewster," which features Dom Flemons from the Carolina Chocolate Drops and tells the story of Boggs' enslaved (and later emancipated) great-great-great grandfather, born in Alabama in 1829. "When I wrote 'King Brewster,' it was very insular because I was learning about my ancestor and I wanted to tell his story," she says. "But at the end of the day, it's not just my story. It's an American story."

Why soulgrass? Boggs was describing the overlapping genres of her music to a woman sitting next to her on a plane. "Soulgrass," the woman declared.

Her coffee order: "Komodo Dragon is my favorite blend. If I'm going to my local Starbucks, I'm ordering a Caffè Misto. The Caffè Misto is the poor woman's latte; it's basically the same thing, but it costs a lot less."

What she's listening to: "Yasmin Williams. She plays in the most unique way, with the guitar on her lap, and does magical stuff with this way of playing. And a composer named Christopher Tin, whose work The Lost Birds blew me away."

Favorite instrument: A tenor ukulele made by Breedlove Guitars, on which she wrote many songs for Janus: "In 2019, I broke my left thumb, but I could still cradle the ukulele. There are chord progressions in some of those songs, including 'King Brewster,' that I don't know I would've come up with on a guitar. The ukulele freed me to experiment."