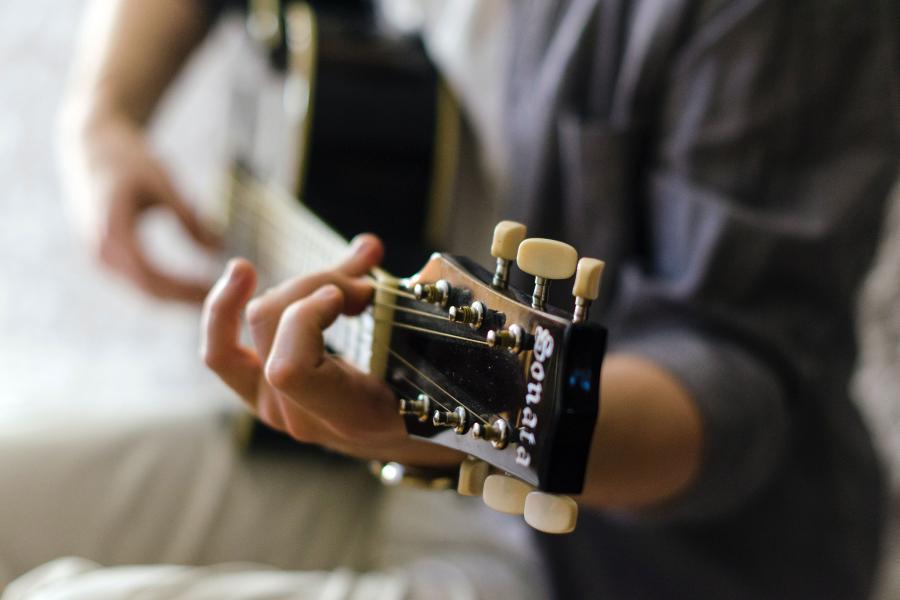 For some, the walk into the rehearsal room was the tell. Slow, deliberate—as if balancing a teacup on one's head. For others, it was the repetitive rocking of hands, however slight: tremors that are a hallmark of Parkinson's, the disease that afflicts them all.

But soon they'll sit in a circle of folding chairs with classical guitars in their laps, picking a single droning note in succession. Eddie Van Halen "Eruption" guitar solo it is not. Yet look closely and something miraculous occurs. Minutes in, the involuntary movements subside, and all that is left is intentional music making.

The 12 adults—most in their 50s and early 60s—here at Peabody Preparatory's Towson campus are part of a 12-week study to ascertain whether musical interventions—in this case hourlong guitar lessons held twice a week—could lessen motor symptoms in Parkinson's patients and improve their cognitive ability and emotional well-being.

In a study published in Parkinson's Disease journal in June, the 24 participants of GuitarPD showed improvement in mood and overall quality of life, and, for some, motor functions, including enhanced posture and gait and the reduction of tremors that affect the hands, legs, and feet. All this from lessons that essentially amounted to Guitar 101, where participants learned from a Peabody Institute instructor how to play basic notes, chords, and eventually simple pieces like "Twinkle, Twinkle, Little Star." Half the participants were randomly assigned to a guitar class, while the other half pursued their usual medical care. After six weeks, they switched places.

The study was led by neurologist Alexander Pantelyat, director of the Johns Hopkins Center for Music and Medicine, and Serap Bastepe-Gray, co-founder of the center, with joint appointments at Peabody (guitar) and the School of Medicine (neurology). Pantelyat says that perhaps most promising was the impact on quality of life, brought out in a self-reporting questionnaire that assesses how often people with Parkinson's experience difficulties with their disease across eight dimensions: mobility, sense of social stigma, activities of daily living (dressing oneself, bathroom activities), communication, emotional well-being, social support, body discomfort level, and cognitive function. The improvements recorded on most measures after the intervention were "clinically significant," meaning the intervention had a genuine, noticeable effect on daily life. While there's mounting evidence that music and rhythm-based interventions can bring improvements across multiple disorders, the study showed that even relatively minimal musical activity could have benefits.

"We know that music activates multiple networks in the brain. It would make sense that you can have multidimensional improvements by participating in music making."
Alexander Pantelyat
Director, Center for Music and Medicine

"We know that music activates multiple networks in the brain," Pantelyat says. "It would make sense that you can have multidimensional improvements by participating in music making. What we found overall for mood and quality of life was significant on a clinical basis."

Parkinson's disease affects over 1 million people in the United States, with about 60,000 new diagnosed cases each year, according to the Parkinson's Foundation. The average age of diagnosis is around age 60. Individuals with Parkinson's often have trouble with hand control, impaired balance, smell deficits, tremors, and speech problems, such as a monotone voice, slow talking, and reduced volume.

With an emphasis on addressing speech problems, Pantelyat and other Hopkins colleagues in 2015 launched ParkinSonics, a musical intervention to assess the impact of a 12-week, 90-minute group singing lesson led by a voice/speech therapist and a professional singing instructor. The 32 participants learned not only the basics of singing but how to read sheet music. They began each lesson with movement exercises (stretching, toe tapping) before moving on to breathing technique and then 10 minutes of warming up the voice. Then they actually sang. Beyond "Do-Re-Mi," they performed songs from the repertoire of the Beatles, Rodgers and Hammerstein, and folk artists like Peter, Paul and Mary and Simon & Garfunkel.

In the trial, one set of 16 participants was randomly assigned to a discussion group focused on life with Parkinson's, where they were encouraged to participate and enunciate clearly. The other took the singing classes. Halfway through, the two groups switched places.

Before, during, and after the intervention, the participants were asked to read a paragraph of text and describe an image they had not previously seen. The researchers recorded and analyzed the .wav files to measure volume and voice changes. In another study published in Parkinson's Disease in September, the results of the singing intervention showed not only significant increases in loudness that were sustained after the classes were over, but improvement in several quality-of-life measures, most notably enhanced mood and a reduction in body discomfort.

Michelle Wilson, a speech- language pathologist at the School of Medicine and assistant music director for ParkinSonics, says that beyond the physical gains of exercising the voice to sing specific notes and pitches, the group activity provided substantial emotional benefits.

The Neuroscience of Music and Parkinson's Disease

"There was very little to no discussion about Parkinson's in these classes," Wilson says. "Instead, we talked about music, the history of the pieces we were performing, the art of voice production. Just the simple act of listening to music gave them benefits, as when you get into a rhythm the movement disorders seem to just disappear. If nothing else, the classes offered a respite from the symptoms they are living with day in and day out."

In fact, both studies were so popular that most participants opted to continue with them. Last year, a DrumPD intervention was launched, with participants learning to play various percussion instruments. Pantelyat says it's been rewarding to see the positive outcomes of the musical interventions last even after the classes ended.

"We've built a community of people," he says. "They network before and after the sessions, and you can't discount the impact on well-being that just being social and engaged in learning brings."

Looking back at the ParkinSonics and GuitarPD studies, Pantelyat says he wishes they didn't get "fancy" in devising randomized studies where everyone participated in the musical intervention and served as the controls. Next time they'll do a more a traditional side-by-side study. "It was telling that after our study nobody wanted to continue on to participate in the support group [laughs]. There wasn't the novelty and fun of making music."