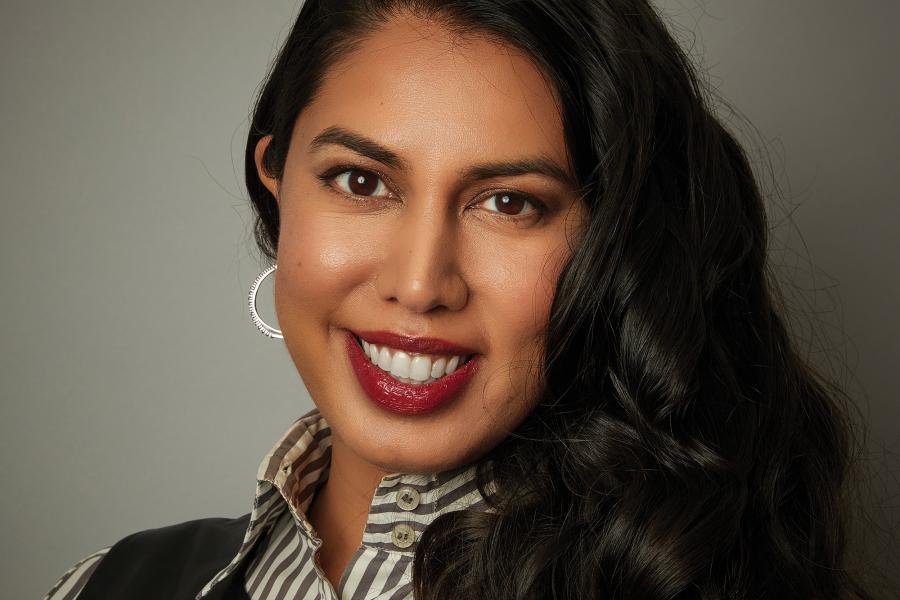 Fighting for your right to know

You may not know Nabiha Syed, A&S '07, but you certainly know the high-profile media law issues she's been involved with for more than a decade: Julian Assange's WikiLeaks disclosures about U.S. airstrikes that killed Iraqi civilians; The Guardian's coverage of Edward Snowden's leaks about unlawful government surveillance; and BuzzFeed's decision to publish the Steele dossier with its unverified allegations against former President Donald Trump.

The Markup Doubles Down on Data Tools as Revenue Grows

Speaking Truth to Power, With The Markup's CEO Nabiha Syed

The 37-year-old media lawyer has now parlayed those behind-the-scenes roles into her current gig as CEO of The Markup, an award-winning nonprofit news outlet that uses data-intensive investigative journalism to report on technology behemoths like Facebook, Amazon, and Twitter. The Markup's motto: "Big Tech Is Watching You. We Are Watching Big Tech."

The daughter of Pakistani immigrants, Syed arrived at Johns Hopkins from Orange County, California, having never heard of Baltimore before applying. And she displayed no penchant for journalism while double majoring in anthropology and international relations.

Media law became a passion after Syed started Yale Law School, where she co-founded the Media Freedom and Information Access Clinic to defend nontraditional news organizations and online reporters against libel, as well as to fight for public records requests through the federal Freedom of Information Act and its state versions. She then specialized in comparative media law for a Master of Science in Teaching degree from Oxford University.

In 2009, while at Oxford, she became fascinated with the ways technology was tearing down the traditional gatekeepers of news, such as legacy print and television news outlets. She began working on a thesis on Wikileaks while in London and reached out to Assange. "It was relatively easy to reach him via encrypted email as a graduate student at Oxford," she says in an email. "He just … responded!" They spoke by phone before she combed through his many manifestos and public statements—all before the website's 2010 leaks would render Assange a pariah to a U.S. government that eventually criminally indicted him for espionage-related charges.

She went on to land a First Amendment fellowship with The New York Times and an associate's job at Levine Sullivan Koch & Schulz, a leading media law firm that helped guide The Guardian's decision to publish Snowden's leaked disclosures.

"I've always been fascinated with the question of, Who gets to know? And, Is it fair that the gatekeepers know and the public doesn't? And, When do you let the public in?"
Nabiha Syed

"I've always been fascinated with the question of, Who gets to know?" she says. "And, Is it fair that the gatekeepers know and the public doesn't? And, When do you let the public in?"

Those became critical questions when she went on to work as BuzzFeed's vice president of legal and associate general counsel. "If there was any boundary to poke, [BuzzFeed Editor-in-Chief Ben Smith] would be doing the poking," she says.

The Steele dossier had been circulating around Washington, D.C., news outlets for months. "Everyone knew it existed, but no one was publishing it," she says. "Ben didn't think it was right that there was this thing that all the gatekeepers of information knew but that the public didn't know about."

He decided to publish it in 2017, and Syed prepared the legal arguments to support him when, as expected, the traditional news establishment roundly condemned the publication. A defamation lawsuit ensued from a Russian entrepreneur mentioned in the dossier, forcing Syed to help defend BuzzFeed against the claim, which BuzzFeed eventually won.

Smith's decision to publish the dossier matched Syed's own fearless ethos, one she learned from her grandmother, Majida Rizvi, the first female judge of a high court in Pakistan.

The Markup came calling in 2019 with an opportunity to be president of the startup, which at the time was saddled with a highly publicized internal squabble about the outfit's vision. The outlet was being funded by $23 million in grants from philanthropy, primarily from the foundation of Craigslist founder Craig Newmark. Other funders include the Ford Foundation and Luminate. Syed helped steady The Markup and was named CEO in April 2022.

"The Markup does really important work, helps defend the country, and Nabiha's leadership is a vital part of that success," writes Newmark in an email to Johns Hopkins Magazine.

The Markup's team of investigative reporters and editors won the 2022 Gerald Loeb Award in the personal finance and consumer reporting category for exposing how Amazon gives itself an advantage over competitors, including listing its private label products above competing items with higher ratings. It also won an Edward R. Murrow Award for investigative reporting this year on the biases infecting crime prediction software.

"You don't have to wait for anything but an opportunity, and then you do the work."
Nabiha Syed

The Amazon project included the creation of the Amazon Brand Detector, a browser extension that highlights Amazon's private label brands while shoppers are scrolling through products. As part of its effort to help its audience members protect themselves from "digital harm," The Markup built a URL shortening tool similar to Bitly but with one critical distinction: It doesn't track its users. In addition, the outlet recently published an investigation, together with the Associated Press, that shows how nonwhite neighborhoods near predominantly white neighborhoods in multiple cities pay the same price for internet service that is far slower.

"Having slow internet doesn't just mean you can't watch YouTube. It means you're disconnected from digital life, from work, from schools. And that's not tenable," Syed says. "Having a healthy information ecosystem is necessary for our democracy to survive."

The project was accompanied by a new service The Markup calls a "Story Recipe," a detailed roadmap to help local news organizations conduct the same investigation in their regions.

Because for Syed, it's not enough for The Markup to uncover what is happening. The outlet strives to empower others to make changes on the local level.

"Regulatory pressure at the federal level is great," she says. "But it's that local pressure that trickles up in a way that really matters."