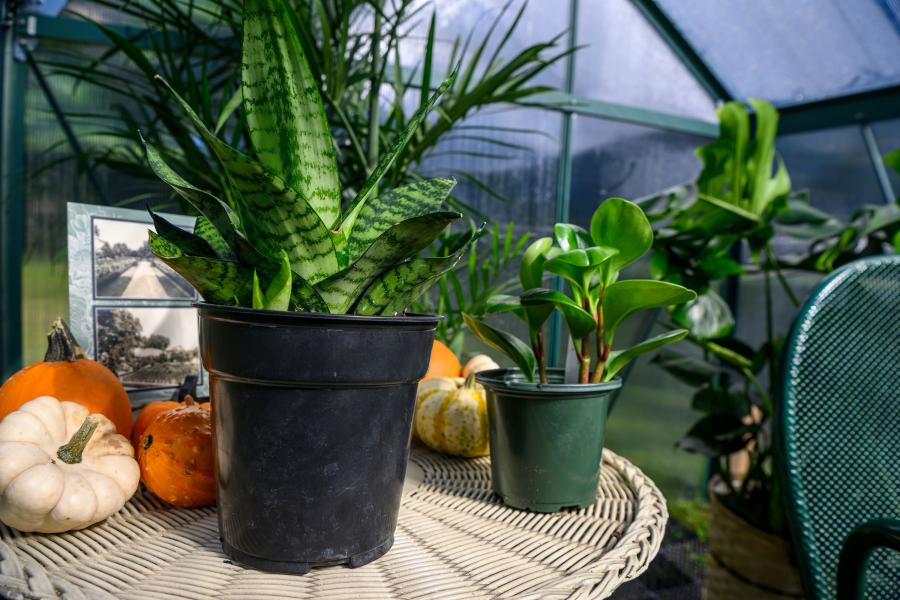 Exhibit at Evergreen Museum & Library explores our obsession with houseplants

Sales of houseplants surged these past couple of years as COVID-19 kept us at home and many chose to assuage their creeping anxiety through the calming act of nurturing some domestic greenery.

"The Victorians were motivated to take pride in their houseplants for similar reasons you see in the present. This common human psychology is really endearing to me."
Michelle Fitzgerald
curator

This isn't too dissimilar to why the first great houseplant boom kicked off in the Victorian era, says Michelle Fitzgerald, curator of collections at Johns Hopkins' Evergreen Museum & Library. Only it wasn't a pandemic that folks sought to escape via indoor gardening but rather the smoky grime of the teeming industrial cities that more and more were calling home.

"There's a huge wealth of studies showing a connection between caring for houseplants—keeping them alive and watching them grow—and happiness," Fitzgerald says. "The Victorians were motivated to take pride in their houseplants for similar reasons you see in the present.

Evergreen's latest exhibit, The History of Houseplants, running through June 4, 2023, explores this domestic green revolution, with a particular focus on how it was propagated by the two generations of the Garrett family who called the mansion home until 1952.

While the rise of urbanization helped foster the desire for houseplants, it was an invention that allowed it to unfold: the Wardian case. Essentially an early terrarium, it's named after English doctor Nathaniel Bagshaw Ward, who began experimenting with the cases in the 1830s. The apparatus's boon to greenery was twofold: Plants grown inside the sealed cases enjoyed a humid micro-climate within drafty and arid homes. And when employed on ships, they provided protection against temperature swings, allowing plants uprooted in the tropics to survive a lengthy sea journey.

"Thanks to these cases, you suddenly have this influx of exotic plants in the market," Fitzgerald says. "They really kicked off the plant craze." Alice Whitridge Garrett, who became mistress of Evergreen with her arrival in 1881, joined the craze with abandon. In addition to filling the home with plants, her green zeal led to the erection, within the decade, of an elaborate greenhouse on the property, more than 150 feet long and containing a soaring palm house and specialized rooms for orchids.

But you didn't need a Gilded Age fortune to leaf up your home. "You did have plants accessible to the working class as well, namely the fern," Fitzgerald says. "Because there's a bunch of different species of ferns native to Europe and North America, if you had any sort of access to a wetland environment, you could harvest a fern and bring it home and take care of it." Exhibit signage puts a name to the fern fad: Pteridomania! Curiously, while cacti and succulents are common on windowsills today, Victorians eschewed the spiny plants, with women's magazines deeming them "grotesque."

Alas, as this was an age when wild birds were massacred in the millions for feathers to adorn lady's hats, we shouldn't find it too ironic that Victorians could lovingly care for plants in their parlors while lacking any concern over the unscrupulous and rapacious way wild plants were harvested. "Orchid hunters were secretive about finds and would wipe out whole fields," Fitzgerald says. At least one species of British Isles fern was hunted to near extinction during this time, she adds.

Don't look for the massive greenhouse at Evergreen today, as it exists only in photos. Alice Whitridge Garrett's daughter-in-law Alice Warder Garrett, tore down the greenhouse in the 1920s. Cost-cutting was one reason. "To operate the greenhouse and the gardens required a staff of 50 just to maintain the plants," Fitzgerald says.

Are all those houseplants people got during COVID still alive?

How the Victorian fern-hunting craze led to adventure, romance, and crime

But Alice Warder Garrett was more interested in fine art: plants in paintings or glassworks rather than pots. The exhibit includes not only beautiful vases and planters but also plant-themed artworks, such as the striking watercolor Female Figure with Flowers by Jazz Age icon Zelda Fitzgerald.

Serving as a backdrop to a glass case of botanical objets d'art is a blown-up 1886 image of Evergreen's first floor main hall brimming with plants. That view is a bit different today. Because the house is a museum, the exhibit includes no living plants. Water and soil are too risky to have within the historic space amid so much precious art. But a temporary greenhouse has been set up on the lawn, allowing visitors to meditatively enjoy some lush leafiness while viewing Evergreen through the glass as Alice Whitridge Garrett would have done all those years ago.