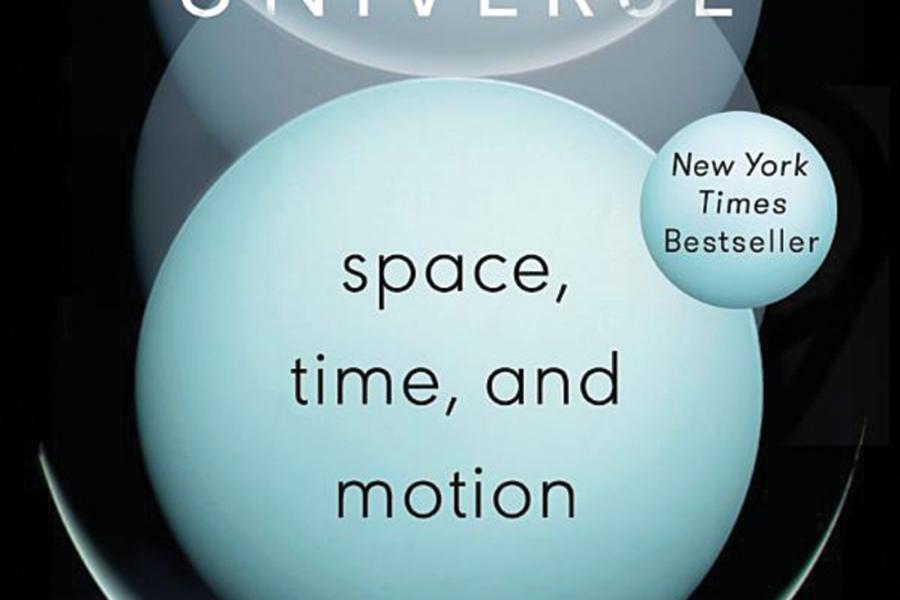 Book review: 'The Biggest Ideas in the Universe'

There's nothing small about Johns Hopkins physicist Sean Carroll's latest undertaking. The Biggest Ideas in the Universe: Space, Time, and Motion is the first volume in an ambitious trilogy that seeks to explain physics to a popular audience—one willing to grapple with the basics of calculus and other mathematical underpinnings of the field.

This book focuses on classical mechanics, including Einstein's theory of relativity, with chapter titles such as "Conservation," "Dynamics," "Space," "Time," "Spacetime," and "Black Holes." It turns out that there are white holes, too, and three different subsets, or branches, of classical mechanics: Newtonian, Lagrangian, and Hamiltonian.

The next planned volume in the series, Quanta and Fields, covers quantum field theory and particle physics. The third, Complexity and Emergence, will show, Carroll writes, that "interesting things happen when systems consist of a large number of moving parts." In other words, (more) complications ensue.

Carroll makes plain what he's trying to do in Biggest Ideas: fill the gap between "learning physics as an interested amateur, relying on metaphors and murky translations" and becoming a credentialed expert, adept at solving equations. The goal, he says, will be simply to understand the math and how it illuminates the physical world. At times Carroll seems like the intellectual equivalent of a football coach, cajoling readers not to despair at the difficulty, to give just a bit more than they think they've got. "One of the most enjoyable features of physics," he promises, "is how quickly we go from mundane observations to profound questions about the nature of reality."

Carroll is a lucid and buoyant prose stylist, clearly enamored of his subject matter. And when he sticks to narrative, it's possible for a layperson to follow—just barely—his explanations. But pages strewn with equations and graphs may well discourage all but the most committed readers. On the other hand, the book may be ideal for anyone studying introductory physics in high school or college and looking for an elegant summary of its most important concepts. I wish I had had it back then.

Sean Carroll is a physicist and a philosopher of science. Host of the Mindscape podcast, he has written several books for popular audiences. His latest, The Biggest Ideas in the Universe: Space, Time, and Motion, is the first volume in a trilogy introducing key concepts in physics and the mathematics underlying them. Johns Hopkins Magazine asked him about his approach.

What was the project's genesis?

As you might recall, we had a pandemic. A lot of my friends in science were trying to be helpful by actually curing the pandemic. And I can't do that. But some other friends were doing free educational things online, and I figured I could do that. So I started doing these videos about the biggest ideas in the universe. And as often happens, it grew out of control, and eventually I decided it would make a good book series.

How did you decide on the organization of the books?

There is a gap in the way that we talk about physics, between assuming you're never going to learn equations, and [therefore] we only give you metaphors and stories, versus assuming you're going to become a professional physicist and we teach you years' worth of courses. And I thought that it was possible to do something in between. It's not just a matter of learning the equations, which is fun. It's a matter of peeking into how physicists actually think.

What are some of the philosophical takeaways?

One is that I am sticking to ideas that are more or less established, that a thousand years from now will still be part of the common lore. On the other hand, I do want to indicate the boundaries of our knowledge. I want to talk about philosophical presuppositions: What do we mean by time, by space, by energy?

What about the key scientific takeaways?

The whole book is based on classical physics, including relativity. So the big payoff is you get to understand what Einstein said in the theory of relativity. How did he come up with this idea that gravity is curved spacetime? There are [other] payoffs along the way. You'll understand energy better than you did before; you'll understand time better than you did before. I'm giving away a lot of the cool, secret ideas that physicists share among themselves. But relativity is definitely the crown jewel of the collection.

What were some of the challenges you encountered in writing the book?

You're presuming that there is an audience who's willing to put in the work. Because even though I do try very hard to make the concepts understandable, the concepts are intrinsically challenging. You're going to have to think.