A bond beyond the curtain call 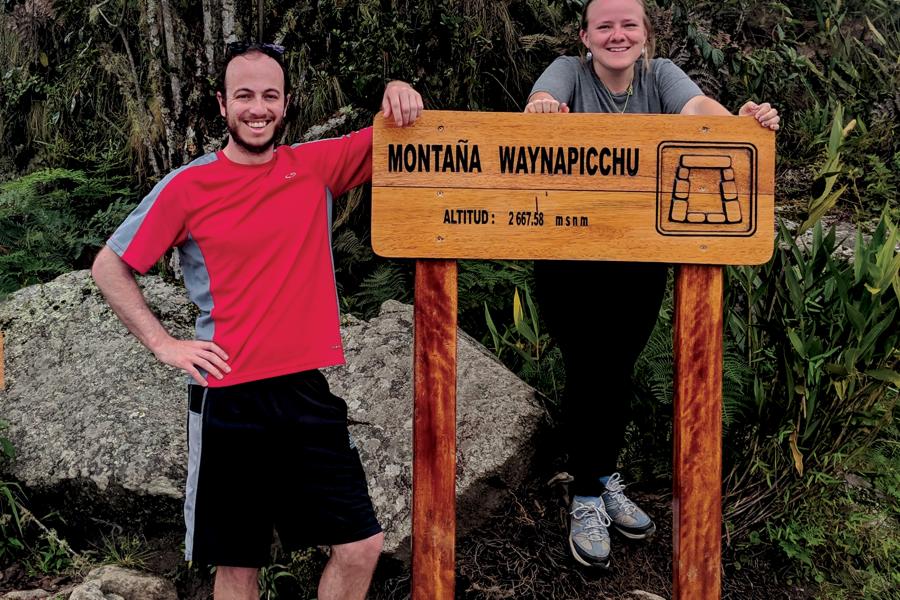 Image caption: Dave Berenato and Elizabeth Sherwood on their 2019 trip to Peru, which included a 10-mile hike through the mountains of the Inca Trail to Machu Picchu

David Berenato, A&S '15, and Elizabeth Sherwood, A&S '15, were freshmen when they first met in the Writing Seminars' Introduction to Fiction and Poetry II. Recognizing each other from encounters with mutual friends, they chose to sit next to each other. "And the rest," Dave says, "is history."

After just a few weeks of friendship, Elizabeth convinced Dave to audition for that year's Barnstormers musical, The Drowsy Chaperone. Dave remembers Elizabeth playing the building super. "She did the thickest New York accent, and she nailed it," he says. Soon, they were hanging out every day—having lunch after class, enjoying rehearsals, and soaking in everything Hopkins had to offer.

"Meeting Dave helped me realize that I could find people in college who were similar to me and had the same interests," Elizabeth says. "College life became infinitely better after I met him."

The good memories stacked up during those four years: going to opening night of the Avengers movie at the Rotunda and sharing a seat because the theater was oversold. Making chocolate crepes in Dave's shared dorm kitchen in Charles Commons, now Scott-Bates Commons. Trying fried Oreos at Spring Fair in 2012. Going to parties and stealing the aux cord so they could play Nicki Minaj. And Elizabeth will always remember Dave's fantastic Oscars watch parties, which included tuxedos, a chocolate fountain, and homemade crème brûlée.

After graduation, their friendship didn't skip a beat despite moving to opposite sides of the country—Dave is pursuing filmmaking in Los Angeles while working as a Salesforce administrator for Capstone Green Energy, and Elizabeth is a planning editor at NY1 News in New York City.

Their mutual love of pop culture and travel keep them close despite the miles. An epic journey through Peru in 2019 was followed by a trip in early 2022 to Palm Springs, where they made a toast to their 10 years of friendship; it had been a decade since they took that first writing class together.

When they're not traveling together, Elizabeth and Dave talk every day; Elizabeth thinks they have only grown closer post-college. "He's the first person beside my folks whom I want to tell my news to, good or bad."

Elizabeth and Dave share the typical Hopkins drive to work hard to achieve their goals, and they are each other's sounding boards for creative ideas and dreams.

"Elizabeth has shown up for me so much in my career," Dave says, recalling how she stayed at his parents' house when his first short film was part of the 2019 Philadelphia LGBTQ+ Film Festival, qFlix. "Ours is a bond that only gets stronger as we navigate challenges and share our successes together."