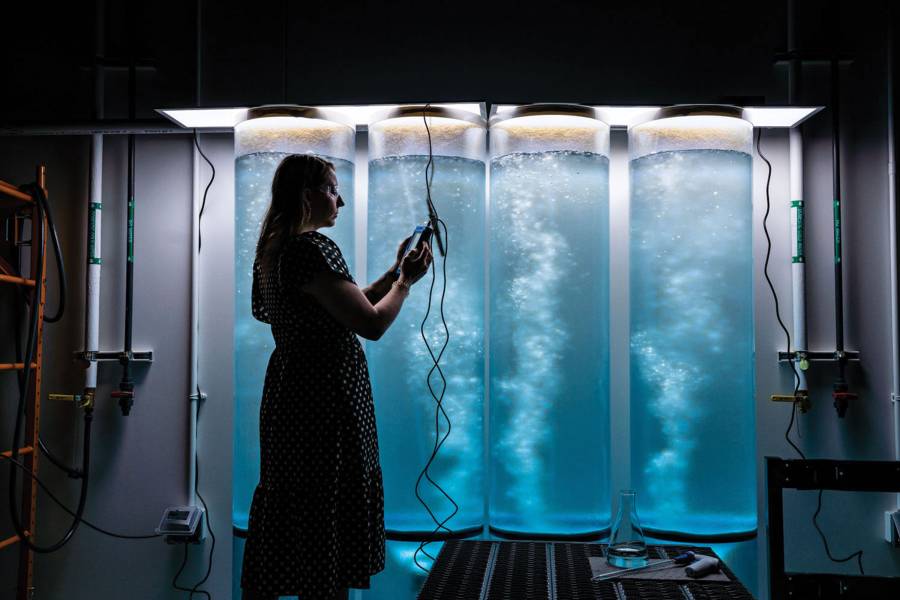 According to Eric Hancock, spider crabs dance. At least, he likes to think so.

Each day at work, the marine biologist walks over to the 500-gallon tank that houses 11 common spider crabs, ranging in size from 4 inches to a little over a foot in claw span. The crabs are separated by opaque plastic dividers so they "don't squabble," he says, but they share the same seawater that neatly matches the water temperature, salinity level, and nutrient content of their natural habitat off the Florida coast.

"They're really charismatic," he says. "Each has its own little personality. I watch them dancing in fun ways. They're probably the most exciting creatures we have." The "we" is the Johns Hopkins Applied Physics Laboratory, or more specifically its new NAMI facility, a 3,000-square-foot laboratory for unique applied marine biology. The indoor facility, which opened in summer 2020, boasts aquariums of various shapes and sizes. NAMI has the capability to make its own seawater—up to 10,000 gallons per week—and is currently home to aquatic organisms including barnacles, mussels, coral, algae species, zebra­fish, and those fun dancing crabs—along with some native Maryland blue ones, of course.

The sea creatures live in modular mini environments, or mesocosms, for controlled experiments. Right now, NAMI features a dozen or so of these mesocosms, including coastal Florida, a tank that replicates Baltimore Harbor (yes, it's brownish), and a larger tank for the waters off Hawaii. A mini Arctic Ocean or Gulf of Mexico coming soon? Sure, why not.

"The conditions of the water, and what's living in them, depend on what the needs of the project are," Hancock says. "For the Baltimore Harbor tank, we can drive almost literally down the road to collect samples that are relevant to the projects, like small false black mussels that attach themselves to just about anything you place in the water. But, yes, we've done far-flung places and could replicate any environment."

"We're kind of just letting the creatures be and it's creating its own environment within our tank. It's really, really cool to see."
Maddison Harman

Maddison Harman, one of NAMI's three in-house marine biologists, says that each mesocosm evolves over time, especially with the emergence of cryptic animals that stow away in the water or on other creatures. "We'll see jellyfish ephyrae that pop up at different times of the year. Then we'll do a water change and see some blue crabs come out," Harman says. "Sometimes we'll have a bloom of little anemones that'll stick to the glass. We're kind of just letting the creatures be and it's creating its own environment within our tank. It's really, really cool to see."

The name NAMI comes from the Japanese mythical giant catfish Namazu, whose tail motion creates tsunamis and earthquakes. APL launched the center to conduct environmental marine research, and it effectively connects the Lab's Research and Exploratory Development department with other units across APL, including the Sea Control area that supports U.S. Navy and joint service missions.

Many NAMI experiments involve submerging gadgets, robots, and other objects and observing how the water and the creatures interact with them. How do you make a buoy, for example, that is more resilient to organisms that might bite or settle on it?

"We get questions like, 'Hey, I built this thing and I want to throw it in the water. What's going to happen?'" Hancock says. "And it's really difficult to do those kinds of experiments in the field because you have to assume that the organisms that you care about are present where you're doing the study. Here, we know it's in the tank. We can help answer questions like: 'How can we prevent growth on this?'"

While much of its work is focused on national security challenges, researchers are also tackling issues related to climate change. Sarah Herman, program manager of the Biological and Chemical Sciences program at APL, says that with the oceans evolving as a result of climate change, existing models don't necessarily reflect the current conditions of the water. "With the changing climate and warmer water temperatures, we're finding some animals have moved or invasive species have entered, which can affect the entire ecosystem and change the data."

Some experiments take minutes to run; others require months. For example, they recently started an experiment to see how mangroves respond to changing water temperatures. While mangroves grow relatively quickly, they might take years to reach full maturity. And these tropical trees and shrubs, with extensive root networks, are essential to some coastal ecosystems because they help prevent erosion and capture carbon dioxide that would otherwise be released into the atmosphere.

The NAMI mesocosms and footprint will change quite often, Herman says, as tanks are changed out and new creatures brought in. Coming soon? Hancock says he's jazzed about the pending arrival of some sheepshead, a toothy fish found in the western Atlantic. What sort of damage can this creature's bite produce? They'll aim to find out.