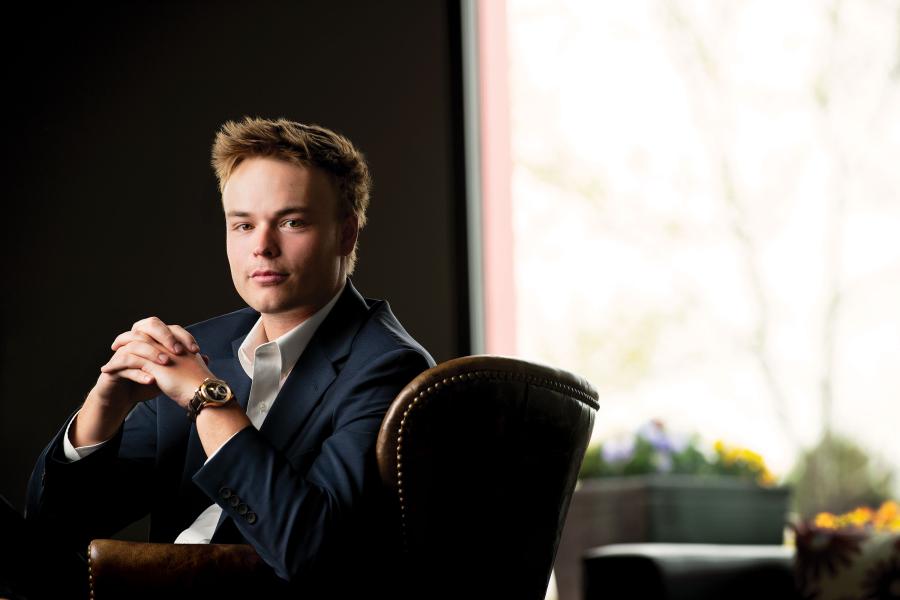 With his purchase of Towson Watch Company, alum Spencer Shattuck takes his affinity for high-end watches to new heights

As a young boy, Spencer Shattuck was enamored by the boardroom gifts given to his father, former energy executive Mayo Shattuck. He began his own small collection of luxury pens: assorted Montblanc pens and intricately designed writing instruments from Chinese manufacturers. Eventually, his love for luxury goods led him into the world of high-end watches. "I was just fascinated with the idea of luxury and collecting as a whole, the ability to turn a raw material into a piece of art," says Shattuck, A&S '21. "I love the mechanical movement of a watch. It has 207-plus working components within it and, when it's finished, it becomes this mechanical sculpture on the wrist."

Shattuck recently took his affinity for timepieces to new levels when he became the owner of the Towson Watch Company. Since its founding in 1998 by German engineers Hartwig Balke and George Thomas, Towson Watch Company has made a name for itself as one of the only watch companies in the U.S. to build mechanical watches in-house.

Shattuck had shadowed the watchmakers at Towson Watch Company in middle school, after being introduced through longtime family friend Kevin Plank, whose company Sagamore Ventures had purchased Towson Watch Company in 2016. In high school, he started flipping watches and designer goods on eBay to build enough capital to start his own watch collection.

Located in City Garage in Baltimore's Port Covington, the company's showroom is used for designing, assembling, modifying, and restoring bespoke pieces, giving customers unprecedented access to the hands that craft each original timepiece. They also play host to clients, events, and tours in the space.

"We are not just a company that is sticking a logo on pre-made dials," Shattuck says. "We have our watchmakers working at our workshop every single day, and most brands cannot say that—not even the big Swiss players."

Balke has been instrumental in onboarding Shattuck to his new role as president of Towson Watch Company. "He taught me the value of customer service and to always treat clients as family," Shattuck says. The team has also brought on apprentices from the Baltimore area to learn the craft directly from the masters.

"It's my job to tell the story of what these watchmakers have mastered and devoted their entire lives to," Shattuck says. "Luxury and premium value for mechanical watches should be based on the actual labor involved in creating them and the attention to detail of the product itself."

Shattuck hopes to continue the company's skillful approach to creating custom timepieces. He has started an influencer program, partnering with fellow watch enthusiasts including professional golfer Kevin Streelman and members of the band backing country singer Morgan Wallen. A proud Baltimorean, Shattuck hopes to create more local jobs and donate to area charities and nonprofits.  When asked if Plank had any parting advice on running the company, Shattuck replies: "The main lesson Kevin taught me was that passion fuels everything. As long as you love and are fully committed to what you're doing, success is inevitable."

Bucket list watch: I've always wanted a skeleton watch, where you can see the movement through the face and dial of the watch. I recently commissioned one from Towson Watch Company, and now I wear it every day.

Favorite place you've traveled: Germany. They have some of the best artisans in the world.

Go-to Baltimore restaurant: Petit Louis in Roland Park. It's true to itself and it's just classic.

In five years I'll be: Doing this exact same thing, but by that point we will have successfully scaled awareness and appreciation for independent watchmakers like us.