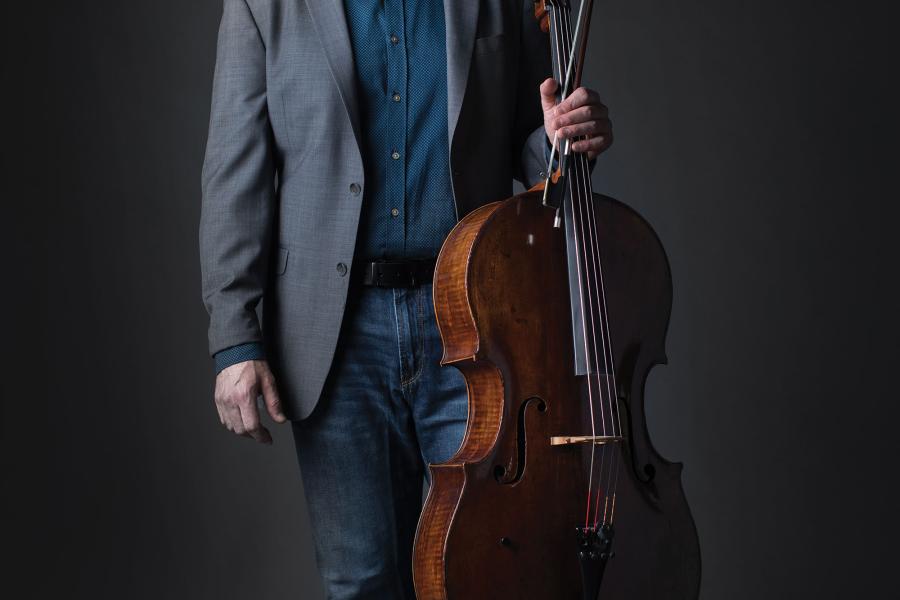 A Himalayan mountain peak and the symphony hall stage have this in common: If you want to plant your flag in either of these realms, it's good to have some help.

Climbers employ Sherpas, Tibetan guides renowned for their mountaineering. And for two years now, musicians striving to reach the top of the field can seek guidance from Atlanta Symphony Orchestra cellist Joel Dallow, Peab '94, and his biweekly podcast The Cello Sherpa, where he and guests discuss, as the intro to each episode states, "the climb to the summit from intermediate musician to the professional stage."

"It reflects the philosophy of my teaching," Dallow says of the podcast he considered calling Cello Ninja or Cello Wizard before finding Sherpa to be the perfect fit. "You can't help somebody get to the summit unless they've worked and trained to get themselves in shape," he explains.

How do you get to Carnegie Hall? Practice. Or so runs a dog-eared music joke. While mastering an instrument is a must, Dallow focuses on the other hurdles to landing a spot in an orchestra or chamber group, particularly those where anxiety might undermine one's skills. "A lot of it comes down to the performance aspect—preparing for performances, auditions, and competitions," he says. "And that's so different from just practicing in a practice room. I talk to experts in the field who have made their own journey about their experiences and things that made them successful."

"I could get experts to come and sit down and have a conversation for 30 minutes and share their wisdom and offer the kind of information that I wish I had had growing up."
Joel Dallow
Host, The Cello Sherpa podcast

During pandemic downtime, when performances stopped and the private lessons he had been giving went virtual, Dallow looked for ways to expand his mentoring role for the next generation of musicians. Realizing that some classical music experts and consultants charge as much as $200 for a session of career guidance, Dallow decided to leverage his connections and "remove that barrier" via a podcast. "I could get experts to come and sit down and have a conversation for 30 minutes and share their wisdom and offer the kind of information that I wish I had had growing up," he says.

Dealing with performance anxiety and stress tops the list. Dallow says it took him five years and 25 auditions around the country before winning his spot in Atlanta. In one episode of Cello Sherpa, guest Noa Kageyama, a performance psychologist (yes, that's a thing) at The Juilliard School, described two aspects of performance anxiety: the physiological response—the racing heart, sweaty palms, etc.—and the cognitive response—"the doubts and the fears that pop into our heads." The latter might be more debilitating, he told Dallow, adding that yoga and meditation can help with both. Aspiring musicians might take some solace in knowing the greats suffer stomach butterflies before performances too. When celebrated British cellist Steven Isserlis was on the podcast, he emphasized that such feelings were normal. "I'm definitely not cool as a cucumber," he said. "Cucumbers really have no place on the stage."

Sometimes, audition success comes down to proper housekeeping, not dealing with a racing heart. A Sherpa episode titled "No Cats and No Unmade Beds" seems cryptic until Dallow's guest, Manhattan School of Music cello Professor David Geber, describes judging a videotaped audition where he was distracted by the messy bedroom and playful kitten in the background.

"Naturally the podcast is heavy on cellists, as I have a little more access to them," Dallow says. "But I try to make it about the principles all professional musicians will find valuable." Guests have included a nutritionist, a legal expert, and an instrument repair tech. An upcoming episode will feature veteran cellist Janet Horvath, author of the guidebook Playing (Less) Hurt, to discuss how musicians can avoid injuries and better recover from them when they do happen. "It's important because professional musicians generally deal with some level of pain," says Dallow, who has tendonitis in both arms. (It's not too far a stretch to compare classical musicians to elite athletes, given their mutual reliance on precise muscle movements.)

Dallow jokes that the listenership for his niche program "is nothing compared to true crime podcasts," but he is thrilled to see it's been downloaded in 55 countries. Although he's back to performing, he has no plans to stop podcasting, even after securing the rare cellist who is a household name: Yo-Yo Ma. Dallow has met and played with Ma many times over the years, starting with their first encounter when Dallow was 14, but it was still a lengthy process to get on the musical globetrotter's schedule. "He's the most gracious and humble human being you can imagine," Dallow says.

Ma spoke of the musician's "duty to care" about the world around them, and how, even though his career has seen him win nearly two dozen Grammy Awards, the performer said he was most proud of appearing on the children's shows Sesame Street and Mister Rogers' Neighborhood. Dallow called Ma "the ultimate cello Sherpa" for his role in promoting the instrument to younger generations.

"We're doing this because we're fellow cellists, we like this stuff, and we want to pass on that love to anybody who might be interested," Ma told Dallow. "That's all we can do as humans, is to pass on something that we think is valuable."