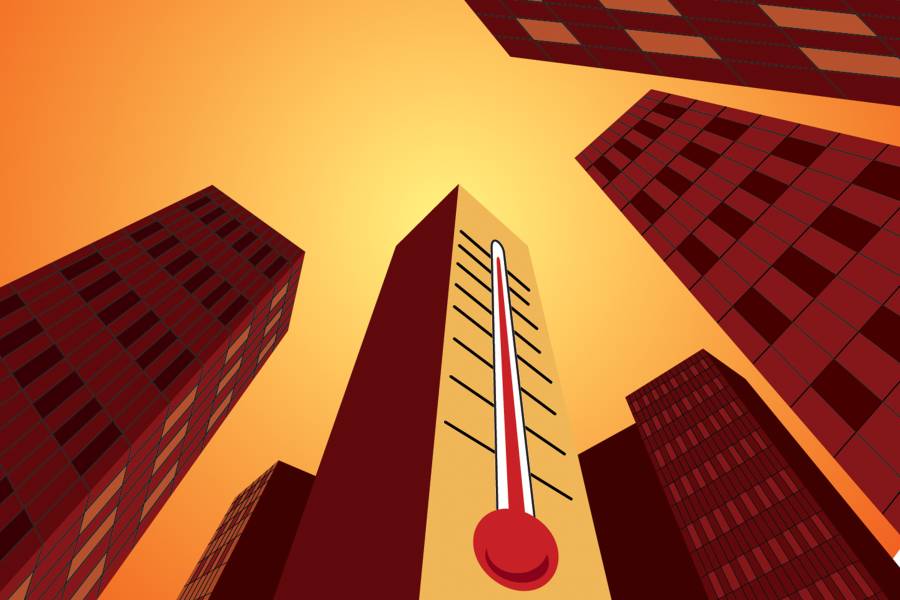 How to combat urban heat islands

In one respect, Meredith McCormack dreads the onset of summer. McCormack, a pulmonologist, treats people with asthma and chronic obstructive pulmonary disease, commonly known as COPD. And she knows that when the stiflingly hot weather arrives, it will fill her clinic with patients whose breathing attacks are worsened by the high heat, a growing and serious consequence of climate change. High heat and humidity can trigger severe asthma symptoms because the combination keeps air from moving—making breathing difficult—and traps pollutants that irritate the airways.

"A heat wave can be really scary for people with asthma and COPD who can't escape into a cool, indoor environment."
Meredith McCormack
Pulmonologist

Such breathing problems are particularly common in certain urban areas, says McCormack, an associate professor of medicine and medical director of the Pulmonary Function Laboratory at the Johns Hopkins School of Medicine.

"There are many neighborhoods that don't have the trees and grass and parks that keep the temperature down, and people who live there often don't have air conditioning, or reliable air conditioning, or they worry about being able to pay their electric bills," she says. "A heat wave can be really scary for people with asthma and COPD who can't escape into a cool, indoor environment."

This harmful scenario is called the "urban heat island effect," and it happens when building materials such as concrete and asphalt absorb heat during the day and radiate it back at night. It causes temperatures to rise more dramatically compared to rural and suburban locations, or city areas with ample green spaces, trees, and parks. A recent report by the nonprofit Climate Central ranked Baltimore as the ninth hottest urban hot zone in America. Heat waves are more than uncomfortable—they kill, causing more deaths in the United States than any other severe weather event, according to a recent study in Nature Communications.

Hoping to ease the disproportionate disease burden on Baltimore's minority and economically depressed urban communities, McCormack teamed up with Darryn Waugh, a professor in the Department of Earth and Planetary Sciences in the Johns Hopkins Krieger School of Arts and Sciences. Supported by a $100,000 grant from the Johns Hopkins Alliance for a Healthier World, they are leading a project to design a computer program that calculates the heat dangers across Baltimore's urban neighborhoods, and then assesses the effects of various mitigation approaches on each community. The Baltimore pilot project, if successful, could be brought to other cities, Waugh says.

With the help of current and past undergraduate and graduate students, the scientists are deploying low-cost electronic sensors in each inner-city neighborhood to measure temperature variations and humidity in real time and then produce high-resolution heat maps.

They plan to collect data on the efficacy of mitigation strategies and apply them, using a virtual model, for every neighborhood. These interventions might include replacing asphalt with cooler pavement materials; increasing the number of trees, parks, and grassy areas; adding cooling centers; and painting rooftops white to reflect heat energy. "If you are in a park, then walk onto a road, you will notice it's a lot hotter there," Waugh says. "Grassy areas and trees absorb less of the energy that comes from the sun."

Many studies already have found that such strategies improve health. The researchers expect to use this evidence, as well as draw upon expertise from the Hopkins Precision Medicine Centers of Excellence, which provide researchers with resources to help them translate their findings into clinical therapeutic applications. They include two relevant centers, one on asthma and another on COPD.

With data from the scientists, the centers will help connect the dots between the Baltimore City heat maps and the known health dangers of climate change. "We will be able to better understand the consequences of heat on our patients across the Hopkins health care system," McCormack says.

The multidisciplinary effort, expected to take about two years, also includes Benjamin Hobbs, professor of environmental engineering in the Johns Hopkins Whiting School of Engineering and director of JHU's Environment, Energy, Sustainability & Health Institute; Kirsten Koehler, associate professor of environmental health and engineering in the Johns Hopkins Bloomberg School of Public Health; and Benjamin Zaitchik, a professor in the Krieger School of Arts & Sciences who studies climatic and hydrologic variability. The researchers are also seeking to involve community residents, reaching out to nonprofit community organizations for feedback.

Among other things, the scientists hope their findings will inform the next update of the city's Climate Action Plan, an ambitious initiative to significantly reduce greenhouse gas emissions by 2025.

"Climate change is an ongoing crisis that affects everyone, especially people who struggle to breathe even under normal conditions and who also face numerous other challenges," McCormack says. "The work we are doing in these communities represents a critical step toward finding solutions and relieving the distress experienced by so many of our patients."