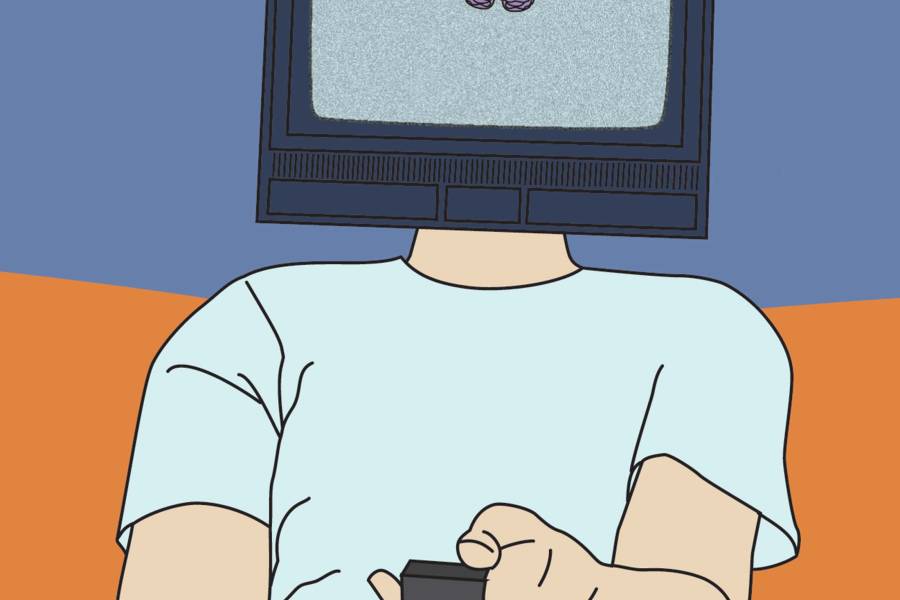 Ryan Dougherty, a postdoctoral fellow in the Johns Hopkins Bloomberg School of Public Health, has a warning for those zoning out in front of the boob tube: Excessive TV viewing might shrink your brain. Literally.

Drawing on data spanning 20 years, he led a study published in the September issue of Brain Imaging and Behavior suggesting that greater amounts of TV viewing can lead to reduced amounts of cranial gray matter—home to the neurons that perform the bulk of our mental processing.

"Individuals who watched, on average, about an hour and a half more daily television than their peers throughout mid-to-late adulthood saw their brain volume reduced by approximately .5% ," Dougherty says. "That percentage may seem small, but prevailing scientific thought says preserving our brain integrity can prolong the time until we notice age-related cognitive decline."

Working in the Bloomberg School's Department of Epidemiology, Dougherty calls himself a "physical activity and exercise scientist" interested in how walking, biking, swimming, and other aerobic activities support brain health and delay age-related cognitive decline and Alzheimer's disease. (Exercise boosts blood flow to the brain, and theories suggest this may bring benefits, such as removing toxins and releasing hormones that trigger the creation of new neurons.) And unless your TV is mounted in front of a stationary bike, watching TV is a sedentary behavior—the pastime of proverbial couch potatoes.

His research utilized the ongoing longitudinal study Coronary Artery Risk Development in Young Adults, or CARDIA, launched in 1985 by the National Heart, Lung, and Blood Institute and involving more than 5,000 participants from four U.S. cities. Although it was designed to study how lifestyle choices can impact long-term cardiovascular health, aspects of the sizable and evolving study are of interest to cognitive health scientists as well, particularly a substudy of 599 participants who were given MRI scans in 2010. Every five years, CARDIA participants are asked to report the average number of hours of TV they watched daily over the previous year. Participants in the substudy were also given MRI scans when they reached age 50.

These participants reported watching a daily average of 2.5 hours of TV, which held steady across 20 years. Dougherty and his study colleagues analyzed the data to find that those engaging in 1.4 hours of additional daily viewing, or more, had a half percent reduction in gray matter on the MRI scan performed at age 50.

Curiously, while earlier research has established that regular physical activity can slow cognitive decline, those participants who reported engaging in both above-average TV viewing and regular exercise showed the same gray matter reductions. "It would suggest that just becoming more physically active alone is not going to negate the negative effects associated with television viewing," Dougherty says. (While the study wasn't able to determine what programming people watched, he hypothesizes that documentaries might be less brain- shrinking than reality TV or other fluff.)

The proof is in: TV really does rot your brain

Mindful of his study's limitations, including its reliance on self-reporting, Dougherty isn't ready to definitively say binge-watching shrinks your brain. Still, he says, his findings contribute to a growing body of research warning about the dangers of excessive TV watching and echo research done by others using the longitudinal study's data that points to a correlation between excessive TV viewing and poorer performance on cognitive tests.

"We should be conscientious about our behaviors and try to decrease sedentary time and increase physical activity," Dougherty concludes. "Television viewing is just one type of sedentary behavior, but it's an easily modifiable one." (Indeed, recent studies suggest that other sedentary activities, such as board games and puzzles, might help preserve gray matter—put down the remote, pick up some crosswords.)

Just don't expect Netflix to make a documentary about all this. "No," Dougherty says with a laugh. "I don't think that would be good for business."