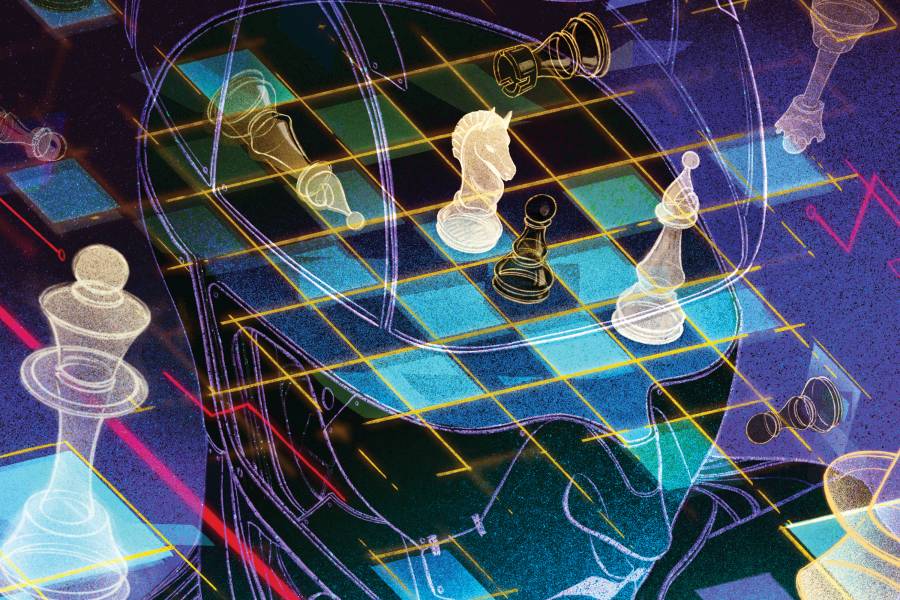 Growing up, Casey Richardson was an avid chess player, studying the game religiously and playing in regional and state tournaments. "One thing I liked about chess is, it's all strategy, not luck," says Richardson, an artificial intelligence researcher at the Johns Hopkins Applied Physics Laboratory. "The better player wins through better strategy."

In 1997, the better player was IBM's Deep Blue, which, in winning its match against world chess champion Garry Kasparov, became the first supercomputer ever to beat a champ. Although Richardson was saddened by Kasparov's loss, he'd become fascinated by the AI that was being developed in computers. "I remember thinking, 'Once you go past that point, they're only going to get better,'" Richardson says.

Twenty-four years later, Richardson is part of a team at APL advancing chess-focused AI to a new level, one not only potentially relevant to the organization's work in military intelligence, surveillance, and reconnaissance—or ISR—but to other realms of business and technology as well. Led by Andrew Newman, a group supervisor and principal engineer at APL, the Reconnaissance Blind Chess team has enabled AI experts to experiment with less-than-ideal amounts of information via online gameplay and competitions.

"We needed to address decision-making under uncertainty, adversarial situations where you have to apply strategies when you do not have complete information."
Andrew Newman
Principal Engineer

"Traditional chess is a full-information game. You see the whole board," says Newman, himself a chess novice. The same goes for chess variants, including blindfold chess, where players, their eyes covered, must memorize moves to "see" the board. In real life, however, adversaries are rarely supplied with that much information. So, several years ago, Newman began to envision a variant that could more closely replicate real-life situations. "We needed to address decision- making under uncertainty, adversarial situations where you have to apply strategies when you do not have complete information," he says.

It's a variant, he points out, that could very well benefit the military. "Imagine a satellite or airplane that has a camera on it, and you're trying to figure out where to look. That's part of what we do," he says of APL's work. "You try to figure out, based on what you've seen and interpreted, where to point your camera."

In late 2015, after acquiring internal funding for the project, Newman assembled a team, which morphed his original concept into the current version of RBC. Among the rules: Before each move, the player selects a 3-by-3 square of the board to see if any of an opponent's pieces are there. The opponent, however, doesn't know what's being "sensed." When a piece is captured, each player is informed, but not told which piece did the capturing. Your rook might be cleared from the board, for instance, but you won't know that it was taken by your opponent's knight. Because of these and other rules, the lack of intel prevents either a check or checkmate. The end goal is to capture the opponent's king in 15 minutes.

While people are permitted to play, RBC was created, primarily, for bots—AI software programmed to master a task. Initially, bots designed by APL employees played RBC on a website created by Richardson, but the long-term goal was to make it available externally. "We wanted researchers, computer scientists, and mathematicians to create bots, using algorithms to help advance the state of the art in optimal decision-making under uncertainty," says Ryan Gardner, a computer scientist at APL.

With that goal in mind, Gardner spearheaded a competition tied to the 2019 Conference on Neural Information Processing Systems, aka NeurIPS, an annual gathering of AI specialists. Each participant, including Google engineer Gregory Clark, created a custom bot to play against other bots, with a few coming out on top.

One lesson learned from that competition is that uncertainty undermines conventional strategies. In regular chess, for example, opening moves, like the aggressive Queen's Gambit, often set the tone for the rest of the game. But, Richardson says, "many openings are unplayable in RBC because they leave your king too exposed."

The best bots are those that minimize uncertainty. Clark's bot, for example, models its opponents by looking at past games from the website's game log and learning how players have behaved.

But does the RBC-focused AI have real-world applications, such as predicting where an enemy's military forces might strike first or how a cyberattack could be initiated? According to Newman's team, it's too early to tell. While the bots' algorithms improve with each competition—the most recent of which took place in late October—there's not yet evidence that the research results could influence military or other strategies.

In general, however, "if you're in an adversarial situation, playing this cat-and-mouse game with an opponent, it should help you learn how to deal with that situation," Newman says. He and his colleagues agree there are many potential applications, including ISR, business, cybersecurity, election hacking, sports, and even driverless cars.

Meanwhile, the team hopes that interest in RBC will continue to grow so that AI algorithms continue to improve. So far, the game is far from mainstream, but Newman says one avid chess player—a high schooler interning at APL—is developing a smartphone app to play it. "Once this goes public, it could explode," he adds, half-jokingly. "Kids could start playing, and if they really like it, who knows?"