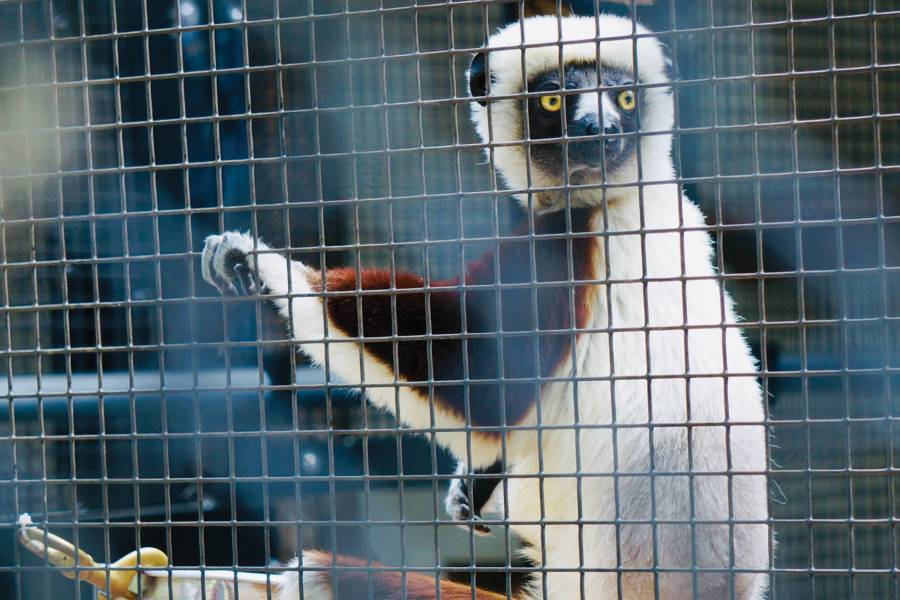 The anatomical scars of lemurs in captivity

In the recesses of the Smithsonian National Museum of Natural History in Washington, D.C., Stephanie Canington is giving a dead lemur a tooth exam. Holding the caramel-colored skull of a once-captive sifaka, a lemur known for its prodigious leaping ability, she looks for many of the same things a dentist does during a standard teeth cleaning: signs of wear, plaque buildup, cavities. Without the benefit of flossing and brushing, most of the lemur's teeth are understandably the worse for wear—entire regions are caked in calcified tartar or crumbling around inky abscesses. Some teeth are missing altogether. 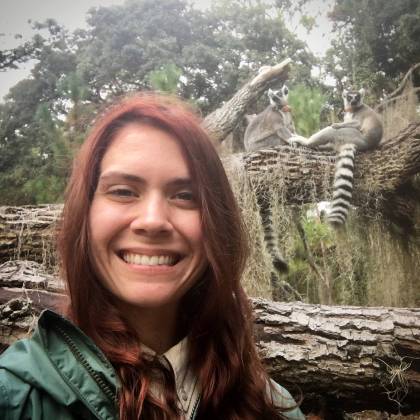 Image caption: Stephanie Canington takes a selfie with some lemurs on St. Catherine's Island, off the coast of Georgia

While it might seem obvious that lemurs lack proper dental hygiene, inspecting their teeth helps Canington, a PhD candidate in the Johns Hopkins Center for Functional Anatomy and Evolution, glean insights into how the care, diet, and habitat of captive primates have progressed over time.

Humans have kept primates in captivity for thousands of years. Mummified remains show that ancient Egyptian zoos exhibited baboons as far back as 3500 B.C.E. In that regard, lemurs are relatively fresh on the captivity scene owing to geographic isolation—each of the hundred-odd species of lemurs is naturally confined to the island of Madagascar, 250 miles off the coast of eastern Africa. But once colonial trade routes opened the island up to the outside world, lemurs were ferried away to fill royal menageries throughout Europe. Equal parts cute and exotic, lemurs were, and remain, a zoo staple—ring-tailed lemurs are currently found in more zoos than any other primate.

By the late 19th century, lemurs had crossed the pond and found homes in some of America's earliest zoological parks, including the Smithsonian's National Zoo. Earlier this year, Canington and other researchers at the Smithsonian sifted through decades of documents to understand how primate care at its zoo has evolved since the 1890s. Early on, conditions were deplorable—budget shortages forced the National Zoo to crowd its primates into cramped cages near a bevy of other creatures, including ravenous big cats. The enclosures also put them in close contact with human visitors, who often fed the animals whatever they could fit between the bars, leading to decades of unhealthy snacking and the fatal poisoning of a monkey in 1895. The diet provided by the zoo in those days was not much better. Although most primates are omnivorous, those at the National Zoo lived off a protein-deficient diet revolving around boiled rice, bread, and produce deemed unfit for human consumption.

Those anatomical scars are evident in the primate remains stored at the Smithsonian. Many of the specimens from the early 20th century are riddled with bone diseases. "For many of them, you can tell what decade they're from just because they're more pathological," or diseased, Canington says. Among the most common afflictions is rickets (in adults, the affliction is called osteomalacia), a disease that can soften bone and results from a vitamin D deficiency. Humans and other primates receive vitamin D through sunlight and a healthy diet, but neither was readily available to captive primates in the age of restrictive indoor enclosures and poor diets. 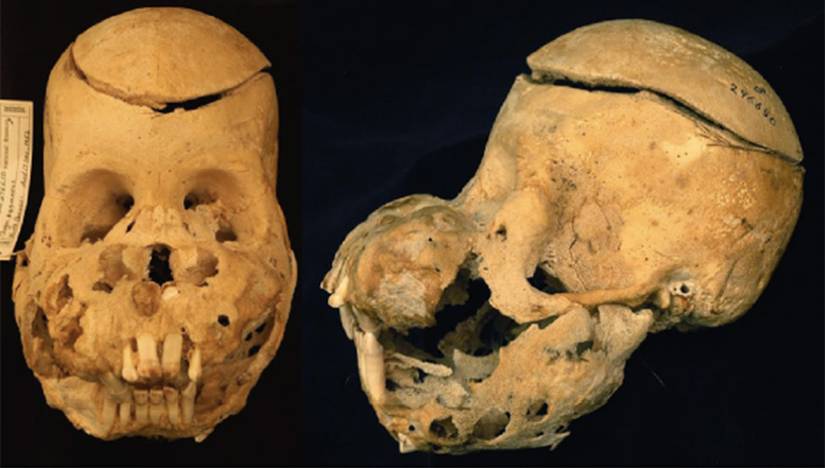 Image caption: This swollen skull of a young orangutan resides in the Smithsonian National Museum of Natural History primate collection

As Canington opens the drawers of specimens collected decades ago from the National Zoo, she is often greeted by malformed skeletons warped by these vitamin deficiencies. In the most extreme examples, as in the case of a young orangutan shipped to Washington from Borneo in 1952, bone resorption caused jaw bones to swell into large tumors, producing a condition Canington calls "puffy face."

Thankfully, as Canington examines more-recent skeletons, brittle bones and swollen skulls become less common. Since the 1960s, when zookeepers began formulating healthy diets and replicating natural habitats, these afflictions have largely disappeared. Modern zoos even incorporate dental exams and teeth cleanings, so the postmortem dental examinations Canington conducts show fewer cavities and less tartar buildup. Ironically, zoo care has improved so much that some captive primates are beginning to experience age-related diseases, like osteoporosis, that they rarely encounter in the wild—the negative externalities of a longer life.

The Smithsonian's primate collection serves as a testament to how captive care has improved over the decades, according to Canington. "Just like how evolution happens in the wild—there's an evolution of the captive environment, which has happened since zoos came into being," Canington says. With such a long and tenuous record of humans' relationship with our fellow primates encased in these bones, Canington is dismayed when other researchers dismiss captive specimens and focus solely on those collected in the wild. After all, in an age of massive biodiversity loss, captive specimens may be more important than ever. Threats like poaching and habitat loss have decimated wild primates—98% of Madagascar's lemurs are threatened with extinction, and four out of the six great ape species are critically endangered according to the International Union for Conservation of Nature. If current trends persist, the fate of our closest evolutionary kin may come down to zoos restocking the wild with captive apes and lemurs.

That's why Canington believes it is time to give captive specimens their scientific due. "We need to learn all we can about captive animals now because one day they're going to become the voice of their species."