Still gaga for each other 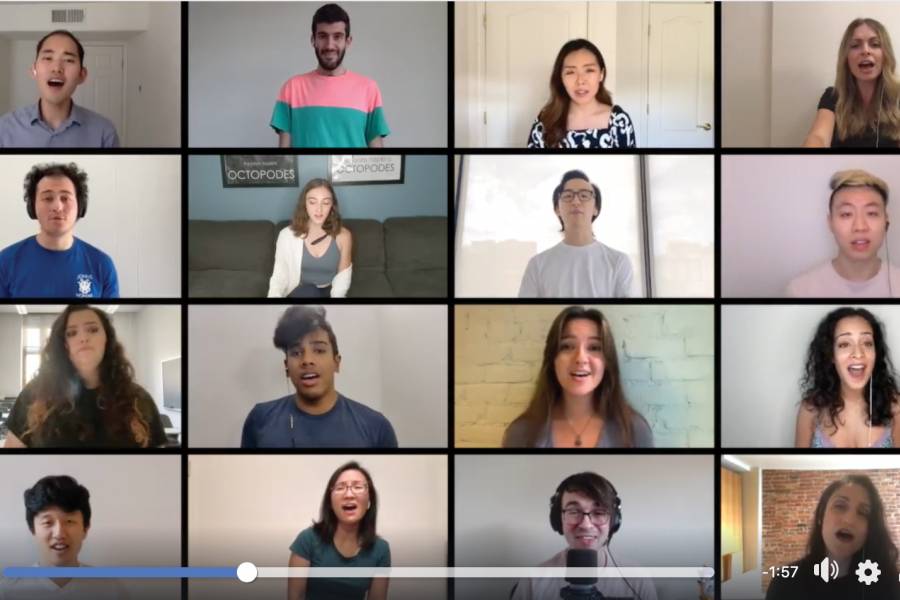 When the COVID-19 pandemic derailed plans for the Octopodes' 30th anniversary celebration last spring, Peter Yang, A&S '14, devised an idea to get alums and current members of the a cappella group harmonizing in a new way.

"Many people were not able to get together to sing or perform live, but we started seeing lots of virtual collaborations," Yang said. Yang volunteered to use his production skills to reunite Octopodes past and present for a remotely produced music video. At Hopkins, he triple-majored studies, and East Asian studies, but it was his three years as the Octopodes' musical director that landed him his first job. He sang with an a cappella group on a cruise ship and then spent several years working as an a cappella recording engineer, traveling the country to help other musical groups put together albums.

Image caption: Alumni of the JHU Octopodes from 2005 through current seniors put together a virtual choir to perform this original arrangement of Lady Gaga's "Enigma." All parts were learned and recorded separately on phones to maintain safe social distancing.

Yang, 29, who now works as an actuary for MetLife in New York, posted in a Facebook group for Octopodes alums to see if any would be interested in collaborating on a virtual performance and rapidly heard back from dozens. Yang chose Lady Gaga's "Enigma," arranged the song for seven parts, assigned them, and even recorded demos for each. ("You don't want to hear those because I was singing very much out of my range," he says.) Then, he waited for the recordings to come in from vocalists.

For Steven Chang, A&S '05, Med '10, and his wife, Susie Jang, A&S '05, the opportunity to be part of an Octopodes production again was a welcome relief. The couple, who met in the Octopodes, had spent the summer apart because Chang, a physician treating COVID-19 patients, did not want to bring the virus home to his wife, who is also a physician, and their children. "We planned our recording for the one weekend in the summer when we all got to be together," Chang said. "It was really nice to be able to spend time together, getting to reminisce and do something that was the reason for us meeting each other in the first place."

All together, about 40 past and current members of the Octopodes sent videos to Yang, which he wove into one seamless production during more than 25 hours of editing. Yang peppered the video with references that only devoted Octopodes fans would notice, such as having three women from the Class of 2013—Abigail Ryan, A&S '13; Devika Bhise, A&S '13; and Miriam D'Onofrio, A&S '13, SAIS '14 (MA), friends and frequent collaborators in their Hopkins days—appear simultaneously. Once complete, the video was sent to the current Octopodes, who posted it on their social media channels.

For participants, seeing the final video, online at tinyurl.com/3c2njje8, was a moving experience. "Honestly I cried," said Ben Ackerman, A&S '15, SPH '20 (PhD). "I thought it looked and sounded phenomenal, but what really got me was seeing all the alumni and friends from over the years in the video together. It felt like we were together again. No pandemic can diminish the bond we've formed through this group."