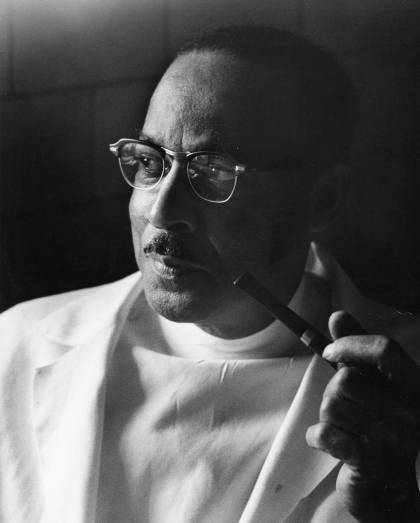 "So creating more equitable opportunities for more students is critical to our country's future in so many ways. By supporting JHU's world-class STEM program, and by partnering with historically Black and minority-serving schools that have a strong record of educating students who go on to get STEM PhDs, we will help increase diversity in industries that will pioneer advances we have not yet even imagined, and shape the lives of generations to come."

The initiative is named in honor of Vivien Thomas, a pioneering scientist at Johns Hopkins Hospital who developed a corrective cardiac surgical technique to treat "blue baby syndrome" in the 1940s. He conducted years of lab work to demonstrate that the procedure could be performed safely and even oversaw the first procedures on humans, but he did not receive credit for the lifesaving advance—known as the Blalock-Taussig shunt—for decades. Thomas went on to train generations of researchers and surgeons, and received an honorary doctorate from JHU in 1976.

Multiple studies have shown that STEM PhD programs do not reflect the broad diversity of talent and perspectives that other fields of study have cultivated, nor have they effectively recruited scholars from diverse undergraduate institutions. National Science Foundation data show that in 2019 there were more than 30 fields of science in which fewer than five PhDs were awarded to Black or Latinx students in the U.S. The percentage of science or engineering PhDs awarded to Native American, Native Hawaiian, or Pacific Islander students has been stagnant at about a third of their share of the total population for a decade.

Although Johns Hopkins has made significant strides to increase diversity, only 11% of students in its STEM PhD programs are from underrepresented minority backgrounds—slightly higher than the 9% average reported by JHU's private research university peers but still far from representative of the overall population. Through the Vivien Thomas Scholars Initiative, "Johns Hopkins will invest ambitiously, think ambitiously, and act ambitiously to begin correcting the long-standing inequity in PhD education," said JHU President Ronald J. Daniels.

"Scientific discovery that continually advances human flourishing and creates a healthier, safer world must be fueled by the expertise and insights of people of differing perspectives and ideas," Daniels said. "Yet decades of data and our own experience show the persistent truth that PhD programs, particularly in the STEM fields, do not reflect the full spectrum of available talent. We cannot hope to produce the best science nor ensure that our faculties are truly representative until we increase the diversity of our PhD programs."

The gift from Bloomberg Philanthropies will provide permanent funding to add a sustained cohort of approximately 100 new positions for diverse PhD students in JHU's more than 30 STEM programs, representing disciplines ranging from neuroscience to physics to engineering. The initiative will seek applicants from HBCUs and MSIs, a group that encompasses more than 450 four-year colleges and universities nationwide. Each scholar will receive up to six years of full-tuition support, a stipend, health insurance, and travel funding, along with mentorship, research, and professional development opportunities.

The first cohort of Vivien Thomas Scholars will enter Johns Hopkins PhD programs in fall 2022. More than $15 million will be dedicated to strengthening pathways for talented undergraduates to pursue STEM PhDs at Johns Hopkins and elsewhere. Initially, six partner institutions—Howard University, Morehouse College, Morgan State University, Prairie View A&M, Spelman College, and the University of Maryland, Baltimore County—will receive flexible funding to be used at each institution's strategic direction to continue to attract and prepare their undergraduate students for STEM graduate training. The gift will also support the new and expanded fully funded undergraduate summer and post-baccalaureate experiences that provide exposure to JHU's research and faculty, building on the success of existing pathways programs at Hopkins.

Bloomberg has long focused on increasing equitable access and opportunity across higher education and last year launched the Greenwood Initiative at Bloomberg Philanthropies, an effort to accelerate the pace of Black wealth accumulation in the U.S. and address decades of systemic underinvestment in Black communities.

Since Bloomberg's historic $1.8 billion gift for undergraduate financial aid at Johns Hopkins in 2018, the university has seen meaningful increases in the diversity and excellence of its undergraduate programs. With 32.5% self-identifying as a member of a racial or ethnic group that is historically underrepresented at the institution, Hopkins' most recent entering class is the most diverse in the university's history and also among the highest achieving in the nation.

"Over the past decade, and through the enduring support of Mike Bloomberg's philanthropy, Johns Hopkins has been intentional about building one of the most diverse and academically talented undergraduate student bodies in the country," Daniels said.

"We must take a similarly expansive approach to moving the needle in PhD education. We need such diverse leadership in all spheres of endeavor, and especially in our universities, where bold ideas take shape and are brought to bear on the world's great challenges."