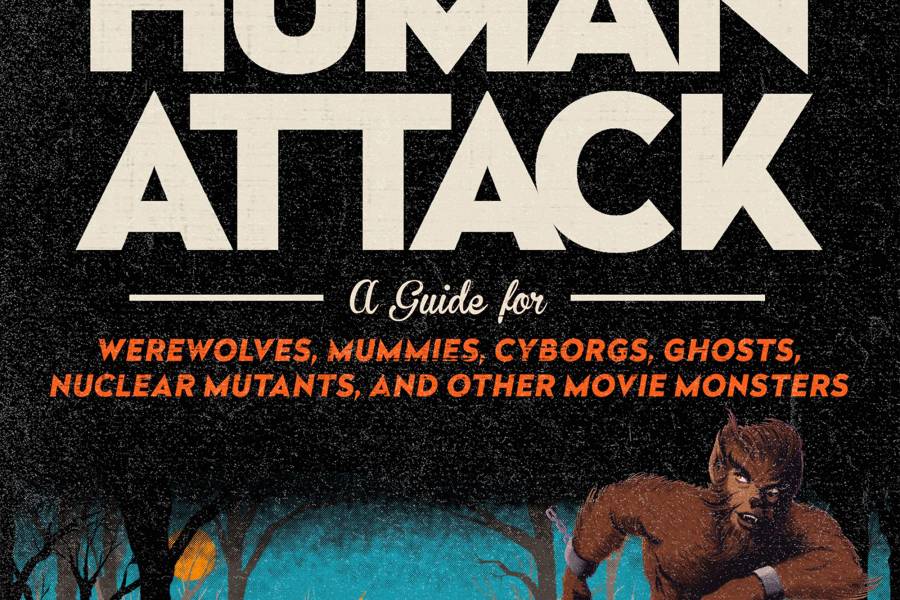 At first, writer Kathy Flann simply wanted to help the undead. The Johns Hopkins Advanced Academic Programs writing lecturer recalls that her husband became a fan of the television series The Walking Dead, and while they're usually into the same popular culture things, this post-apocalyptic series wasn't one of them. It was too loud, Flann explains, recalling overhearing "this screaming from the other room, and it would go on and on. And all I could think was that they are really not good at this, and we should help them."

"They're constantly getting killed and they're hungry and that's not their fault."
Kathy Flann
Author How to Survive a Human Attack

Just to be clear, when Flann says "they," she is referring to The Walking Dead's undead, aka zombies. And when she says "help them," she means assist their pursuit of that which they want: the eating of human brains. "They're constantly getting killed and they're hungry and that's not their fault," Flann continues. She's seated at an outdoor café on an unusually cool Baltimore summer day with her Yorkie mix, Clarence. The undead, Flann points out, have already died once, so "they don't actually care if they survive; they just want to eat. You have to think about what their goals are, and if you can give them advice."

If the idea of zombie advice sounds entertainingly preposterous, meet How to Survive a Human Attack (Running Press), her new collection published under her nom de humor, K.E. Flann. Subtitled A Guide for Werewolves, Mummies, Cyborgs, Ghosts, Nuclear Mutants, and Other Movie Monsters, and featuring the glorious illustrations of Joseph McDermott, the book is a hilarious excursion through a variety of self-helpish chapters that provide its target market enough information to avoid deadly encounters with humans—who, as horror fans know, are responsible for nearly 100% of all monster slayings. People, Flann informs her zombie readers, do have weaknesses: "The main thing to do is to stick together. Zombies have a capacity for togetherness that humans can't understand. And they can't kill all of you."

Human Attack is Flann's fourth book, her first humor outing following a nonfiction book on writing and a pair of award-winning and mordantly witty short story collections. She's a fiction writer and educator by training, with an MFA in Creative Writing from UNC Greensboro—she didn't know that humor writing was a publishing world adjacent to contemporary literature. All she knew was that in order to give monsters advice, she had to consider how each monster dies in conventional horror fictions and think backward from there. She needed to see the world through the monster's eyes, a process that clicked with her fiction writer's brain.

And she had a blast doing it. "You only get to be one person in life and I'm not satisfied with that," Flann says of one of fiction's joys and what sustained her through the book's seven-year journey to being published. "I want to be all these other people, too—which is maybe why I had the best time writing this book. It just kept going: Here's more monsters that need help."

Human Attack reads like a work of performance art, sharply satirizing contemporary human foibles while dishing out its comic survival tips. Each chapter focuses on a specific monster and takes a different format: The section for nuclear and/or other mutants reads like an adolescent guidebook for navigating puberty; the swarms chapter is an employee manual; the ghosts and ghouls chapter resembles a real-estate guide for first-time buyers. Throughout, Flann zeroes in on human narcissism and greed in the plainspoken language of the institutional voice, as when advising werewolves: "Humans consider themselves to be community-oriented pack animals, and yet a curious preponderance of them loves to be treated as alphas."

"The 6(66) Habits of Highly Effective Witches" chapter delivers Human Attack's sharpest sting. Most monsters are implied male, Flann notes, making witches the book's only chapter dedicated exclusively to women. And—spoiler alert—most witch stories in movies and fairy tales and, well, recorded history, involve killing women. This section takes the tone of lean-in, girlboss models of corporate success, which Flann savagely turns into witch survival techniques by advising them to demur into conventional gender roles to avoid misogyny's wrath. "With a bit of luck," she writes, "they will undervalue your contributions rather than kill you."

Sometimes the only thing to do when confronted with the terminal void is laugh while you can. It's a sense of humor Flann shared with her father, "who enjoyed pondering the strange habits of humans along with a Manhattan on the rocks," she writes in the book's acknowledgments. In October 2019 he was diagnosed with an aggressive pancreatic cancer, and by spring 2020 he was hospitalized following a fall, just as American hospitals began worrying about pandemic capacity. Nobody could visit him; calls to his Florida hospital were rarely answered. Eventually, Flann's husband, a doctor, was able to speak to a staff doctor and had his father-in-law's chart read over the phone. He turned to Flann, said, We gotta go, and the couple, their son, and Clarence headed south down I-95. "The entire East Coast looked like a ghost town," Flann recalls.

Review: "How to Survive a Human Attack" - A guide for movie monsters

The funny business of writing: In conversation with K.E. Flann and Jen Michalski

When they finally arrived in Jacksonville, they were able to get her father back to his own home and bed, where he died 12 hours later. Flann recalls feeling shocked at how quickly it happened, how it was so hard to absorb everything going on in the world, how unreal everything felt.

Flann says she feels closer to her dad when she's laughing, "especially about absurdity, his favorite thing to laugh about," she says, adding he would've gotten a real kick out of the public health crisis made visible when entering the Sunshine State. It looked like a horror movie. Police cars blocked the road, lights flashing. Nobody from then hot spot New York could enter. But the woman at the checkpoint, Flann recalls, wasn't wearing a uniform but a floral-patterned ensemble of some sort, and she behaved as if she were welcoming people to a theme park. She looked at their Maryland license plate "and then she asked, 'Where you headed?'" Flann replied Jacksonville. "And she smiled and said, 'Well, welcome to Florida!'"