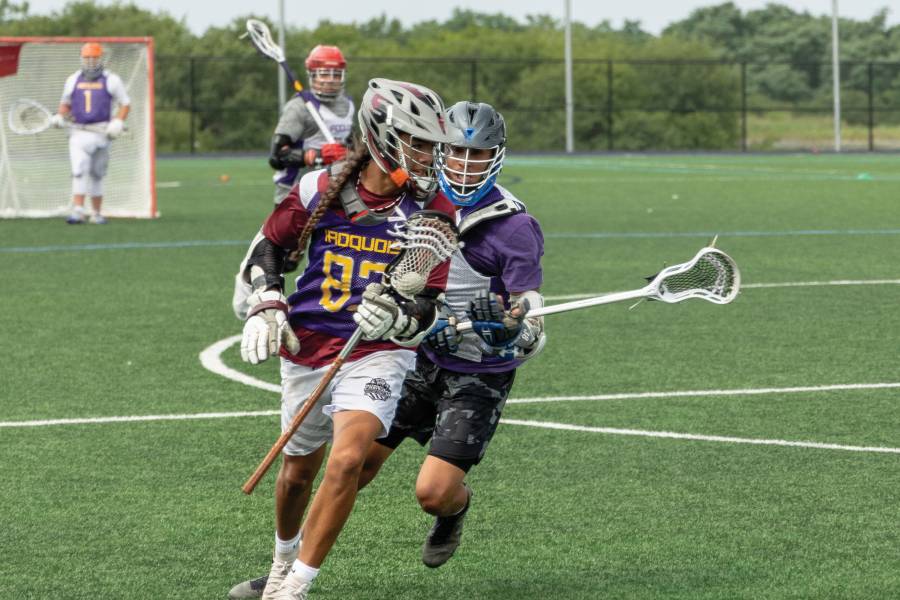 Following a tradition among the Iroquois, community elders place handmade miniature wooden lacrosse sticks in newborns' cribs. At death, these sticks are placed in the coffin. In Native American communities, lacrosse is more than just a sport; it's a spiritual tradition. And it's something that the Iroquois are very, very good at.

The Iroquois Nationals team is currently ranked No. 3 in the world in field lacrosse, No. 2 in box lacrosse, and, despite drawing from a total population of just 125,000 people, it is widely regarded as among the most successful teams in the sport's history. Treated almost like rock stars when they play in competitions, the Nationals feature the No. 2 player in the world, two-time Tewaaraton Award winner Lyle Thompson. So, it came as a bit of a sucker punch to Leo Nolan, executive director of Iroquois Nationals Lacrosse, that when World Lacrosse announced in January 2020 the eight-team field for the inaugural men's lacrosse competition at the World Games 2022, the list did not include the Iroquois Nationals. Despite qualifying for the international event, to be held in Birmingham, Alabama, the Iroquois were excluded because they are not considered a sovereign nation by some and don't have a National Olympic Committee.

The Iroquois Confederacy, also known as the Haudenosaunee, consists of six Native nations that inhabit the northeast corner of North America. In what is present-day Canada, Native Americans first invented the sport, perhaps as far back as 1,000 years ago. A version of stick ball, hundreds of men or more would gather on huge open areas in pursuit of goals sometimes stretched miles apart. Known as the medicine game or Creator's game, lacrosse originated to entertain the Creator and was used as a source of healing and joy for the Haudenosaunee people.

"We were very disappointed," says Nolan, a member of the Akwesasne Mohawk Nation and an associate faculty member with the Johns Hopkins Center for American Indian Health since 2013. "At the time, I felt the lack of appreciation for what the Haudenosaunee have brought to lacrosse as originators of the game, and how much that means not just to us but for so many lacrosse fans throughout the world."

The exclusion didn't go unnoticed on social media. An Inside Lacrosse article that decried the Nationals' omission from the event sparked a petition on change.org signed by more than 50,000 people to reverse the decision and extend the team an invitation. The firestorm led to multiple bureaucratic back channels to broker a deal, but resolution ultimately came in the form of a profound show of sportsmanship. In September 2020, Team Ireland, the ninth-ranked team in the world, pulled out of the competition to let the Nationals in.

In June, Nolan announced that Peter Milliman, the Johns Hopkins head men's lacrosse coach, would serve as the head coach of the Iroquois Nationals Team at the World Games, held every four years as a showcase for non-Olympic sports. This international tournament, Nolan says, is seminal as it's part of a larger campaign to return lacrosse to the Summer Olympics when the games come to Los Angeles in 2028. Lacrosse hasn't been in the Olympics as a medal sport since 1908. And the Iroquois want to be there to represent their confederacy by playing the sport they gave to the world.

The World Games lacrosse tournament will use a new set of rules that World Lacrosse developed for the Olympics to make the sport faster, more attractive to fans, and more manageable in size. Compared to traditional 10-on-10 lacrosse, World Lacrosse "Sixes" features teams with six players competing on a smaller outdoor field. Games will have four quarters, each lasting eight minutes, and feature a 30-second shot clock. Faceoffs occur only at the start of each quarter with goalies initiating play after goals are scored. When a ball goes out of bounds, it's a turnover. There are no offsides, no long sticks. It will be nonstop action.

"It'll look more like basketball with a goalie," says Milliman, who recently finished his first season as head coach of the Blue Jays. "It's really a whole new version of the sport. It's more streamlined and less complicated. Players need to play both ends of the field, offense and defense. Speed and skill will win out more. There will be less physical contact. Overall, you'll see a higher level of athleticism on the field."

This will not be Milliman's first time coaching at the international level, as he was an assistant coach with Team USA at the 2019 World Indoor Championships, where he helped lead the Americans to a third-place finish. He also served as head coach of Team Russia at the 2014 Federation of International Lacrosse World Championships. Milliman says it was an honor to be selected for what will be a historic competition.

"I grew up with this sport and respect its roots and traditions, and this was as intriguing a coaching opportunity as I could ever imagine," says Milliman, who this summer began practicing with the Iroquois Nationals players in Syracuse, New York, and hopes to play in scrimmages with other national teams this fall. "The big goal is to get into the Olympics as a full-time sport, but first it needs to be a trial sport, and to get into trials we need examples that we've played in this format. That's why the World Games tournament is so important."

In addition to competing in the World Games, the Iroquois are currently trying to establish a National Olympic Committee with the hope of securing recognition from the International Olympic Committee, an effort that will be challenging as a nation needs to be recognized by more than half of the United Nations for consideration. Although 35 countries have accepted Haudenosaunee passports as an official travel document, many consider the effort to convince the IOC of sovereign nation status to be an uphill climb.

"The World Games is an important steppingstone for our Olympic dream," Nolan says, "and we're really excited for the opportunity to compete against the best in the world and show everyone how much this game means to us as a people."