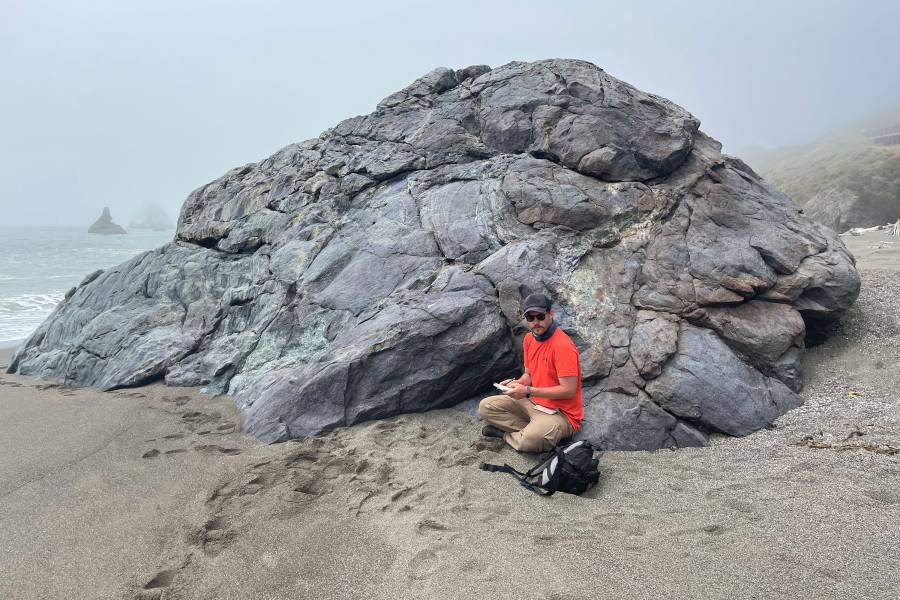 Image caption: In addition to studying rocks in the Baltimore region, Viete researches rock formations in California, as photographed here

A stone church looms over Baltimore's Woodberry neighborhood, about a mile and a half west of Johns Hopkins' Homewood campus. A historian discussing the Gothic Revival edifice might start telling its tale in the 1870s, when the church was built to serve the spiritual needs of millworkers flooding the booming industrialized valley.

But since Daniel Viete is a geologist, he starts things just a wee bit further back. On a recent sunny morning, the assistant professor in the Johns Hopkins Department of Earth and Planetary Sciences stood examining the church flanks and pointing out certain dark greenish stones. "That's serpentinite, and probably around 490 million years old," he says. What's more, he says, the stones are likely fragments of mantle, a region of Earth's interior usually found more than 18 miles beneath our feet. And a recent study suggests these rocks are hunks of oceanic lithosphere—parts of mantle and crust once beneath the sea—in this case, the Iapetus Ocean, which vanished more than 400 million years ago. When and how might the Atlantic Ocean disappear? These ancient stones might hold an answer.

So what are they doing in a Victorian-era church? It's all part of the Baltimore region's rich geo­logical story, which Viete has been chasing down since the Australian arrived at Johns Hopkins five years ago. "Baltimore has research-quality rocks with stories to tell that can help us understand plate tectonics," he says.

Yes, some of the city's storytelling stones are used in buildings, but geologists usually study those found in surface formations, such as in the Baltimore Mafic Complex, a regional geologic belt that includes suspected crustal and mantle rocks cast up from the deep during primeval geological upheavals. Plate tectonics, a relatively new science formalized in the 1960s, theorizes that over vast stretches of geological time, landmasses form, come together, and break apart as a collection of lithospheric plates move. "This dance of the continents is a product of oceans forming between the continents and then closing," Viete says. "But we just don't have a lot of information about these ancient oceans."

In 2019, Viete joined a group of geologists from the Smithsonian Institution collecting rock samples at sites along the Baltimore Mafic Complex. (One prominent outcropping sits within a city golf course.) Studying suspected mantle rocks is challenging once they leave the high-pressure, water-free environment where they form. "When they're exposed to the surface where there's a ton of water around, they transform very quickly, altering mostly through the incorporation of oxygen and hydrogen into their mineralogy," Viete says.

When these rocks were last heavily studied some 40-odd years ago, existing technology wasn't able to, in Viete's words, "disentangle the parts of the minerals that were altered to get at the original compositions." The new samples, however, were pulverized, and using cutting-edge mass spectrometers in Olin Hall on the Homewood campus, researchers were able to peer through the millions of years of alteration to uncover the mineralogical fingerprints suggesting that the rocks were, indeed, once part of an ancient oceanic lithosphere. The resulting study appeared earlier this year in the journal Geosphere.

For Viete, this conclusion is only the start of his work understanding the ancient Iapetus, a precursor to the Atlantic Ocean that "closed" as several landmasses came together, ultimately forming the supercontinent Pangea some 335 million years ago. A process called subduction is responsible for ocean closure, wherein the oceanic lithosphere at an ocean's perimeter cools and becomes so dense it sinks back into the earth, essentially recycling itself at a tectonic plate boundary. (Sometimes a logjam of sorts can occur, and pressurized bits of oceanic lithosphere, instead of sinking, get thrust upon land, as seen in Baltimore.)

Viete is no stranger to Baltimore's curious rocks, having seen similar examples on the shores of Scotland where he formerly did research. "So why should identical rocks of similar age be formed across these vast distances?" Viete wonders. Theories suggest that the subduction that doomed the Iapetus might have occurred along a vast area, following the Appalachian Mountains up the East Coast, crossing into Canada and Newfoundland, and terminating in Scotland and Norway.

Viete's newest project involves examining suspected oceanic rocks from all along this intercontinental stretch and determining when they formed. The dating process involves looking for the mineral zircon, which incorporates uranium into its structure and then radioactively decays—turns into lead—at a known rate.

What Viete learns about the primordial death of the Iapetus might predict the future death of the Atlantic. "We want to know whether subduction zones initiate and grow in a slow and wandering process or very suddenly, geologically speaking," he says. "There's not any subduction in the Atlantic at the moment, but it's going to close up at one point. The geologic record and the theoretical framework of plate tectonics tell us that oceans don't last."

But don't sell your beach house just yet. While small marine arthropods known as trilobites were around to see the Iapetus vanish, humans may well be extinct when the Atlantic does its disappearing act many millions of years from now.