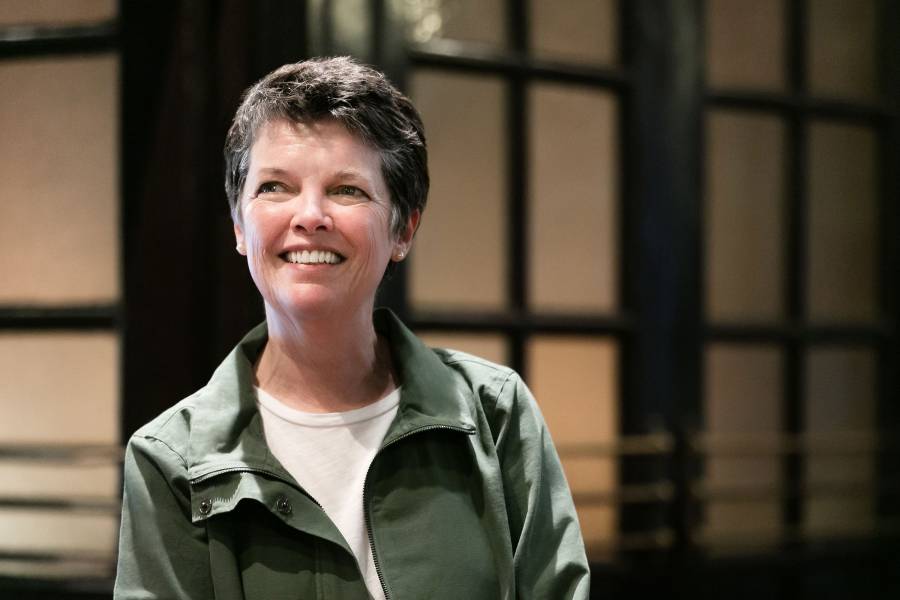 Q&A With Alice McDermott, author of "What About the Baby?"

In 2006, Irish American authors Alice McDermott and Frank McCourt were supposed to walk onto the Kennedy Center's Terrace Theater stage and have a five-minute chat about all things Irish and Irish American. It was a fundraiser for an organization that brought boys and girls from Northern Ireland, both Protestant and Catholic, to the United States for a summer holiday. The stage was dressed like an Irish pub, such that McCourt and McDermott could grab barstools and have their one-to-one. McCourt, however, had other plans. He wanted to talk about the ending of McDermott's novel After This, which had come out earlier that year, and said as much: "Let's go out there and have a real conversation."

This anecdote appears toward the end of McDermott's new collection, What About the Baby? Some Thoughts on the Art of Fiction (Farrar, Straus & Giroux), and succinctly captures the casually rewarding intensity of the entire book. Reading What About the Baby? feels like having a conversation with a fascinating storyteller. In 16 compactly thoughtful essays, McDermott explores the writing process and its recurring doubts and frustrations. Johns Hopkins Magazine caught up with McDermott to talk about teaching and writing, juggling two novels at the same time, and the work of writing.

How has teaching informed your own thoughts about craft?

Something I've always loved about "teaching" a writing workshop is that there's no text until the writers in the class provide it. There's no pre-formed lesson plan either, only the dilemmas—about storytelling, metaphor, character, dialogue, etc.—that those unique and varied works-in-progress bring with them. Over the years, I saw familiar problems present themselves in the fiction of young writers, leading, I'm afraid, to my repeating myself now and again. But even my own writing mantras—Can you see?, for instance—take on shades of difference when applied to different work, and (to belabor the point) it's all, always, different work. No student writer's story is ever exactly like another's.

So, yes, teaching made me formulate my own thoughts about craft, but more often, teaching made me discover those thoughts through the simple exercise of trying to determine what each of these stories required, lacked, or achieved. I never went into a workshop thinking, "I must tell my students what to do to make their stories better." It was more, "I wonder how we'll figure out how to make this story better." It's the same thought I bring to my own writing every day.

I recognize how much I expect from fiction when I become aware of my desire to reread a work that has moved me. That is, when life itself offers a reminder of a story or novel's wisdom or consolation even if, on first reading, I was not aware of why I might need such wisdom or consolation. I suppose I'm making a case here for the storing up of novels and stories and poems that we can return to and see anew as life makes its demands. This is not the same as that prescriptive self-help advice, "You're going through this, so read that." It is, rather, "Read this, someday you might need it."

"The Art of Memoir, the Art of Fiction" essay begins with you admitting that for years your inner voice was calling BS on whether or not what happens in a memoir really happened, and ends with you advising, "Why ask, 'Did this really happen?' Why insult both truth and art?" Do you feel you found your path to this understanding of a memoir's creative power through the process of being a writer?

I've never been much interested in writers' biographies/personalities/exploits, or in sorting through what "really" happened in a novel as opposed to what's "made up." As a reader of fiction, I'm only interested in the made-up, composed, artfully constructed world good fiction creates. Real life I can get on my own, thank you. So, I confess to a certain impatience when readers seek to discover where a story came from or what real person inspired a character. Who cares? And yet, having felt this myself as a novelist, I realized I needed to extend the same question to myself as a reader of memoirs. Ultimately, who cares what's precisely real? A good story artfully told is what we seek.

Amid the wisdom you try to offer a younger you in the "Advice From Me to Me" is one detail I'm dying to hear more about: After publishing your first novel you "developed the habit of working on two novels at once"?

The habit continues. And it continues to be a terrible habit, but one I can't shake. But if you'll forgive a gardening metaphor from a nongardener, there's also the opportunity to till two "plots"—one shady, let's say, one in full sun. The seed of a thought or an image or a character might come to me, something that would not thrive in one of the novels but might take root in the other. I'm totally disorganized and undisciplined in this two-novel habit (no gardener, as I said), but it's how I've come to work. Although I confess it sometimes makes writing short stories terrifying to me: What if this, too, grows into a novel and then I'll have three? In this strained metaphor of mine, something akin to a potted flower taking over a field.

In the book is an exquisitely brief essay titled "Mary McCarthy," about the American novelist and critic. This essay is, in some ways, about the act of remembering. Could you touch on why a discussion about how we remember is necessary in a book about the art of fiction?

All memory, I suppose, is storytelling: the stories we tell ourselves as well as the stories we tell one another. The personal recollection is always going to be colored by time, forgetfulness, bias, imagination, incentive, and utility. The essay's little anecdote about Mary McCarthy gave me a chance to entertain this notion. I had a vivid childhood memory of seeing her in a TV interview. Decades later, I had the opportunity to reconsider that memory when I saw the same interview again on YouTube. What I remembered, what I hadn't remembered, who she was, and who she had seemed to be, encapsulates—in a very small way—how stories, whether fiction or memoir, get told: point of view, setting, time, and its various filters.

But I also wanted to include this essay in the book precisely because McCarthy is now underread and underappreciated. And because her triumph as a woman who wrote in that era of unchecked misogyny should be remembered and celebrated.

This book is explicitly about craft, but I also feel it's this pragmatic reminder that writing is work. Have you always been able to summon that discipline?

The titular "What About the Baby?" essay ends with the delicious kicker about not knowing where to put some of the thoughts we just read: "I saved it for an essay." Is there a mental triage process through which a subject or observation or theme goes that causes it to rise to the level of something you want to write about in fiction?

I've been known to suggest to my writing students that they must put themselves at the service of their characters. In other words, it's not about you; it's about bringing your character authentically to life within the context of the world you're creating. The same is true of story. An author is at the service of the story, the truth of it, and so subject, observation, theme, even tales from your own life, cannot be inserted or imposed—even if these are the very things that brought you to the page in the first place. So, it's not about "triaging," or evaluating the worthiness of one particular idea over another. It's about what the story and the character require of the author as the book is being composed. Sometimes we discover that the story or the character requires that we make use of the very ideas with which we've been most concerned; sometimes we discover that the story and the characters require something we've yet to explore.

Finally, I wanted to ask you about the John Barth quote that opens the book. Was Barth an influence in any way?

Barth's writing was an influence long before I came to Johns Hopkins, as it was for many writers, I think, because so much of his work expands our sense of what a story or novel can be. His work gives young writers permission to examine, celebrate, and luxuriate in form and language—thus that marvelous point he makes that literature "is seldom simply but always also about itself."

John Barth was retired by the time I joined the Writing Seminars, but we did get to meet and chat when he returned to campus for parties or readings. On one of these post-retirement visits, he sat in on my graduate fiction workshop, where I was given a glimpse of what a marvelous teacher he was, and how much he loved that part of his vocation. In those days, our workshops met in the fifth floor "attic" of the old, pre-renovation Gilman Hall. As Barth was making a point about the story under consideration, some classes below us let out and we could hear the chattering of students just released from a lecture or a seminar. He stopped speaking, held up a hand and made us all listen to those young voices. "That's what I miss," he said. "That glorious sound."

McDermott also talks about What About the Baby? with Jane Delury, A&S '00 (MA), at the Ivy Bookshop's back patio, September 28 at 6 p.m.