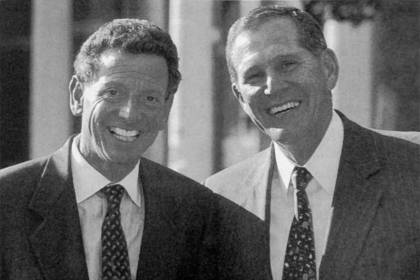 "Truthfully, most of the years after I left Hopkins were devoted to my business career and I didn't have a lot of activity with Hopkins, but Morris did," Bernstein recalls. "And during the 1990s he brought me back and asked me to become a trustee."

Co-founder and former chair of Duty Free International, a publicly traded company on the New York Stock Exchange, and former president of Diplomatic Duty Free Shops, Bernstein was hesitant at first, lacking experience as a trustee of a university. But Offit, founder of Offitbank in New York City and chair of Offit Capital, and then chair of the board of trustee of Johns Hopkins University, was persuasive. "It was one of the great decisions of my life because Hopkins has given so much back to me," Bernstein says.

Bernstein and Offit first met when they were entering their teens, spending time together when their parents, who were friends, visited each other in Baltimore. But their friendship really took off as undergraduates at Johns Hopkins University, when they both joined the Phi Sigma Delta fraternity freshman year. "Sometimes we would double-date, sometimes we would study in the library and then go out to get something to eat late at night—all those things that bring you together when at college," Bernstein says. "We had a lot of fun kidding around together."

In fact, Offit would eventually marry a childhood neighbor of Bernstein's. "His wife grew up across the street from me. She's a lovely person and obviously also a good friend."

Today Bernstein and Offit remain good friends, speaking frequently, though Bernstein lives in Baltimore and Offit in New York. And the pair keeps an annual tradition of honoring another Baltimore institution. "He's the biggest Orioles fan in the world, and I'm part of the ownership group," says Bernstein, "so he comes down to opening day with me each year."

This story was adapted from "Philanthropy: A Fruitful Friendship," published in the Spring/Summer 2021 issue of Hopkins Medicine.