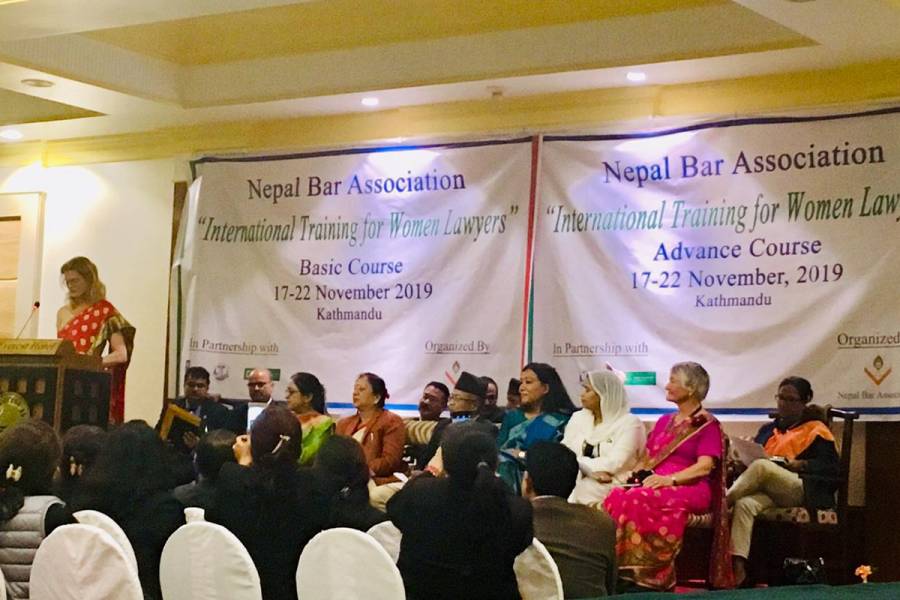 Building a network in Kathmandu

More than 50 years after Nepal's first woman lawyer was sworn in, men still dominate the profession, making up more than 90% of practicing lawyers and earning the top cases and salaries.

Though the South Asian country ratified a new constitution in 2015 that includes progressive changes toward gender equality, disparities persist. Wealthy Nepali families often send their sons—but not their daughters—to law school abroad, giving male lawyers in Nepal international attitudes, skills, and legal networks that women do not have. To bridge that opportunity gap, New Perimeter brings the international law community to them.

Since 2005, New Perimeter has developed long-term legal projects across the globe, including advocating for unaccompanied minors at the U.S.-Mexico border, training Tanzanian government lawyers, and assisting Georgia with climate change negotiations. In Nepal, the initiative focuses on women lawyers, who mostly work on cases related to family law, marriage issues, and domestic violence.

Because there are so few women practicing law in Nepal, Brickman says, these trainings provide an enormous opportunity for this group to meet their peers, network, and swap experiences and contact information during tea breaks.

DLA Piper doesn't have a family law division, but its lawyers work on domestic violence cases pro bono in the United States. As a result, Brickman, a pro bono counsel, and Franceschi, a partner in the sports finance division, are able to help the Nepali lawyers sharpen skills like "interviewing clients in a trauma-informed way and how to practice client-centered lawyering," Brickman says. The team works closely with the Canadian nonprofit Women Lawyers Joining Hands and the Nepal Bar Association, which co-teach the training sessions and add local context. "Often, these lawyers don't have an office, so they're negotiating a divorce at a coffee shop with the other counsel for the husband," Franceschi says. "Usually women tend to represent the wives."

Still, Brickman says, "we find there are more similarities than differences in our experiences" between the U.S. and Nepal. One key similarity is women lawyers' hesitancy to self-promote. "We find there, and here in the U.S., that many women lawyers, especially without practice, may feel uncomfortable speaking about themselves." To get the lawyers comfortable talking up their skills to clients or law firms, New Perimeter asks them to distill their personal brands and career aims into a short pitch. "We filmed the Nepali lawyers making their 30-second elevator speech about why they should be hired," Franceschi says. "Everybody had a really good time doing that. I think it was an eye-opener for them."

Because there are so few women practicing law in Nepal, Brickman says, these trainings provide an enormous opportunity for this group to meet their peers, network, and swap experiences and contact information during tea breaks. "One of the goals of the program is to bring in women lawyers from rural areas" who are often the only women in their communities to practice law, Brickman says, and introduce them to their peers practicing in Kathmandu. "Four trainings ago, the trainees actually formed what we understand to be the first women lawyers' network" in Nepal. "They did it through social media, and it was really neat for us to go back to Nepal for the next training, and learn about what that network was doing."

For more good: Law firms find other ways to provide service to society

Like most travel, this year's trip has been canceled because of the pandemic. "We had been hoping and planning to return to Nepal in late 2020, and sadly, that can't happen," Brickman says. Since the program relies on simultaneous translation through a system of headphones and microphones, it would be difficult to reproduce the experience on Zoom. "We are very hopeful that we might be able to return live in 2021, but if we're not able to, then we'll think about new ways that we can continue the project and our relationship."

In the meantime, both Brickman and Franceschi stay connected to their Nepali colleagues on social media. After Supreme Court Justice Ruth Bader Ginsburg died earlier this year, about 10 of Franceschi's Nepali Facebook friends sent their condolences, remembering that she had cited Ginsburg in her keynote at the closing ceremony last year, which focused on women's leadership. "Fight for the things that you care about," she quoted, "but do it in a way that will lead others to join you."