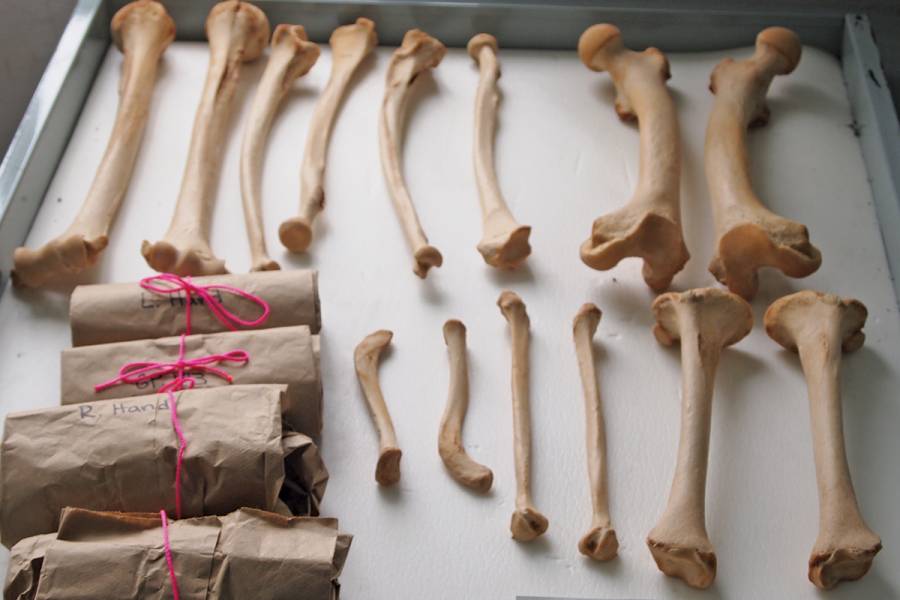 The bones of gorillas, our closest animal ancestors, offer clues to the evolution of osteoporosis—and how we might be able to avoid it

In the heart of the Rwandan city of Musanze, Christopher Ruff stepped off a street bustling with mopeds and bicycles and into the quiet of a mausoleum. In the lobby, he found himself face to face with two skeletons: an adult human and, to its right, a full-grown mountain gorilla with a broad chest and thick bones. It was an apt starting point since those were just the species he planned to compare. 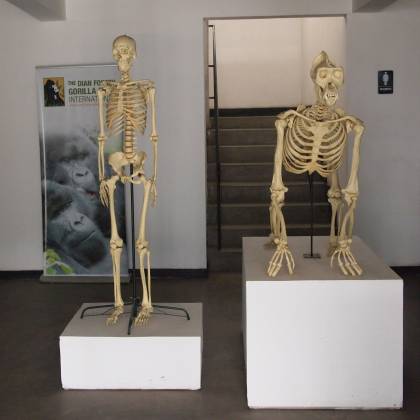 Ruff had come to the Karisoke Research Center, where the skeletons of more than 100 wild mountain gorillas have been carefully collected, cleaned, and cataloged, to find out whether human and gorilla bones age differently. A professor emeritus at the Johns Hopkins Center for Functional Anatomy and Evolution, Ruff was particularly interested in understanding the evolution of osteoporosis, the weakening of bones linked to fractures in old age.

"Gorillas and chimpanzees are our closest evolutionary relatives," he says, so he wanted to know whether they, too, experience osteoporosis with age.

Karisoke is the best place in the world to answer that question. A room lined nearly floor to ceiling with steel cabinets holds the gorillas' remains, each one linked to a catalog with everything researchers know about that individual—in many cases, not only when it was born and died but details of its activities and social life. Some of these gorillas were first observed in the wild by the late Dian Fossey, the famed anthropologist who founded the Karisoke Research Center, which is now part of the Dian Fossey Gorilla Fund International.

"Osteoporosis is a really interesting mechanical issue," Ruff says, and one that's perplexing from an evolutionary standpoint. It seems terribly disadvantageous for a species to become so brittle with age that even mild stress can cause a fracture, sometimes just by coughing. "Why is there this mismatch among older people," Ruff asks, "where your bones become too weak for the normal forces that you place on them?"

One hypothesis is that our ancestors simply didn't live long enough to get osteoporosis. But early in his career, Ruff studied a prehistoric population from the American Southwest and found that while they lost some bone with aging, their bones also changed shape with age in ways that helped keep them strong. Today, both men and women experience steady bone loss with age starting in their 20s or 30s, with women showing a sharper loss after menopause when they lose some of the bone-protecting effects of estrogen.

Since this seems to be a modern phenomenon, Ruff thought, maybe osteoporosis is not a biological inevitability but rather a result of modern lifestyles, at least in part. Physical exercise strengthens bones, particularly if it's weight-bearing, so perhaps our ancestors staved off bone loss through exercise, he hypothesizes. "The main factor here is just moving your own body weight," he says, which ancient people likely did more than people today. That could be true for our more distant evolutionary ancestors as well, and for our gorilla cousins.

Using a miniature CT scanner, Ruff and his colleagues took detailed measurements of bones' mineral content and geometry. The team scanned 34 male and female mountain gorillas ranging in age from 11 to 43, the upper end of a wild gorilla's life span.

Even the oldest gorillas showed no signs of osteoporosis, the researchers reported September 21 in the Philosophical Transactions of the Royal Society B. Their bones did show some expected signs of aging, such as a thinning of bone walls and a widening of long bones, but as Ruff had suspected, they didn't have the same loss of bone mass and density—or overall bone strength—that humans do. Instead, both male and female gorillas maintained bone strength throughout their lives.

Surprisingly, female gorillas even gained more strength in certain bones with age than males did. Much of the reason, Ruff thinks, is that unlike humans, female gorillas don't experience menopause and estrogen loss.

Surprisingly, female gorillas even gained more strength in certain bones with age than males did. Much of the reason, Ruff thinks, is that unlike humans, female gorillas don't experience menopause and estrogen loss. For example, the oldest skeleton in Ruff's study was that of a 43-year-old female, believed to be a gorilla named Papoose that was originally studied by Fossey. Papoose became one of the oldest gorillas ever documented in the wild, and she had nine babies during her life. Her last was born just four and a half years before she died. Yet Papoose's bones were just as strong when she died as those of far younger females.

Ruff suspects that early humans rarely experienced osteoporosis, either. "I think that originally the common ancestor was probably more like gorillas and that there wasn't that long postmenopausal period," he says. Plus, few lived into their 80s and beyond, and their activity levels were likely higher than ours throughout life.

That gives hope for our capacity to stave off osteoporosis today. "We are destined to lose some bone," Ruff says, "but we can keep our bones strong by remaining active."