More than 30 years after they last played JHU men's lacrosse together, 10 of the players from the Class of 1989 say they are closer than ever before 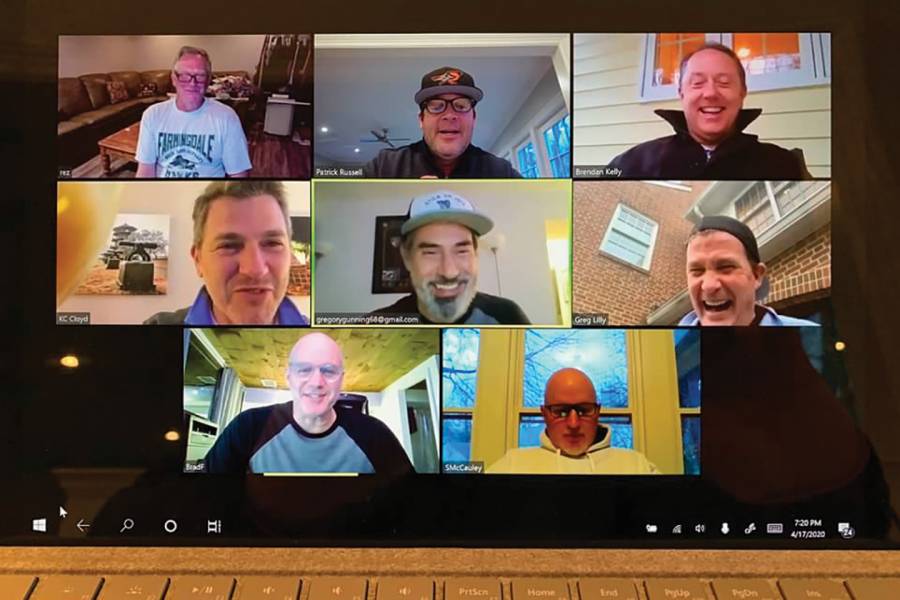 Image caption: The Blue Jay ’89ers have traded face-offs for FaceTime, keeping in touch through the years via text messages and Zoom calls

Between 1986 and 1989, the Blue Jays men's lacrosse team boasted a combined 40-9 record, won the 1987 NCAA Division I National Championship, and narrowly lost to Syracuse in 1989 in what's generally regarded as the best college lacrosse championship game ever played. So it might not be surprising that the players on those teams formed a tight bond. What is extraordinary is that more than 30 years after they played their last game together, 10 of the players from the Class of 1989—the Blue Jay '89ers, as they dubbed themselves—say they are closer now than ever before.

"We are literally texting with each other every day," says Brendan Kelly, A&S '89, a health care consultant who still lives in the Baltimore area and served as the team's captain his senior year. "It almost gets to the point where we are saying goodnight to one another. It's that level of connectivity."

After graduating, the core group of 10 kept in touch—attending one another's weddings, reuniting for annual get-togethers, and catching lacrosse games at Homewood Field. But in the last several years, that level of interaction has only increased. Kelly says their text message strings sometimes go on ad infinitum, whether they're sharing a series of bad jokes, political discussions, or family updates.

When the pandemic hit last spring, the group began holding Friday afternoon happy hours on Zoom. And they haven't missed a Friday since. Each week members invite a surprise "VIP guest" to join the conversation. Past participants have included Maj. Gen. Michael R. Fenzel, A&S '89, who serves on the U.S. Joint Chiefs of Staff; Brad Feldman, A&S '89, an announcer for Major League Soccer's New England Revolution; and Scott Marr, A&S '91, head coach of the University of Albany men's lacrosse team.

"It's seriously one of the highlights of my week," says Patrick Russell, A&S '89, a midfielder on the team, who now works in development at Fordham University in New York.

Despite their successes on the field, Russell says the Blue Jay '89ers rarely talk about the games themselves. Instead, he says, they mostly reminisce about everything else—"the bus rides, our social lives on campus, the laughter we had in the locker rooms, the personalities, and all the good times we had as students at Hopkins."

So why have these teammates remained so close? Both Russell and Kelly say that for whatever reason, this group of guys just clicked—both on the field and off.

"Chemistry means a lot in sports and business and life in general," Kelly says. "We just had this unique group of people who had the right chemistry." All these years later, they still do.