Chris Mason, A&S '74, dedicates his recent poetry collection to Anne, his wife, and what he writes to her doubles as a quick dip into his impish aesthetic universe. Structurally, the dedication is three run-on sentence fragments broken into two- to three-word-long lines that are grouped into three stanzas. The first reads, "your politics Wobblie surfacing probably as authorities shabbily think grabbily and treat humans like less you notice this and get furious," which establishes a giggly mood with its rhythmic polysyllabic rhymes. The dedication's jovial meter remains as Mason pivots into witnessing scenes of violence and ends with loving admiration. The overall effect is like hearing a bubble- gum pop song whose lyrics earnestly celebrate human decency. Mason's entire creative output exists in this realm of profound sincerity. 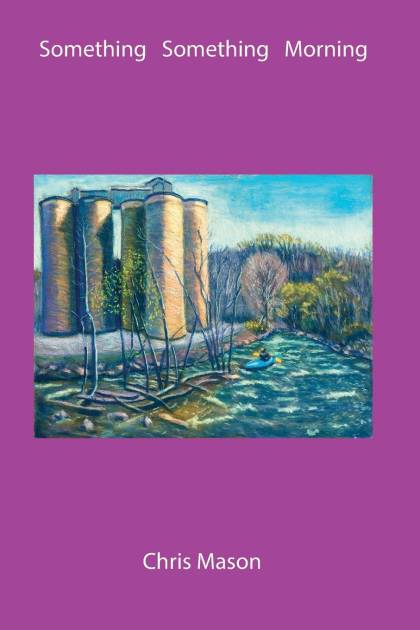 Mason is better known as one half of the musical group the Tinklers—and by better known I mean enamored by a small group of fans that elevates underground artists to cult status. Mason co-founded the duo with Charles Brohawn in Baltimore in 1979, and they took punk's DIY ethos in a wonderfully eccentric direction. Tinklers' songs are simple and direct—the term "childlike" riddles the group's reviews—and the lyrics start in the seemingly naive before molting into the disarming. "Mom Cooks Inside, Dad Cooks Outside" on one level is a kid's jejune observation that the band turns into a haunting exploration of suburban gender roles.

The tension of guileless observation tarnished by maturity's jaded awareness animates much of Mason's work in Something Something Morning (Blabbermouth Press). Most poems are one page long, two tops, and move with the slippery ease of a conversation. Some—such as the "Matter" poems, which are laid out in oval shapes on the page, or the "My Spirographs" poems whose lines form a spiral—betray Mason's coming up in Baltimore's heady poetry activity of the 1970s and '80s, which embraced performance art, playfulness, and irreverence. Mason updates his droll sense of humor in these recent works with a gimlet-eyed pathos, and his poems frequently land with the heaviness of Harold Pinter's emotional complexity. "The main idea of the poem is to emerge from petulance through grandiosity into everydayedness," Mason writes in a poem date-titled "6/12/17."