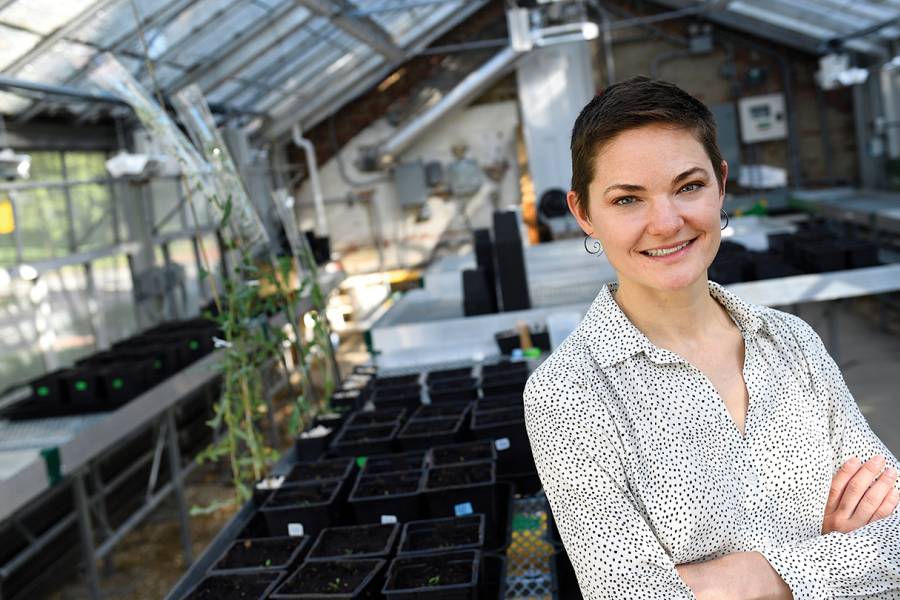 Research that's in the weeds

The oldest academic building on the Homewood campus is a modest brick and glass greenhouse behind Gilman Hall, just beside the Decker Garden. Opened in 1908, it tends to be underutilized today. But it's a perfect spot for Ava Hoffman to grow dozens and dozens of dandelions in black plastic pots. You read that right: dandelions, the ubiquitous yellow-flowered weed. "Just like you would have in your yard," Hoffman says of her tiny seedlings just a few days old.

Hoffman is a postdoctoral fellow in the Department of Earth and Planetary Sciences and an ecologist of a different sort. Some of her flora-focused colleagues are concerned with the rare, the remote, or the endangered—obscure Alpine flowers on mountaintops, tiny ferns lurking on primeval forest floors. Hoffman, on the other hand? "I get excited about plants growing in cracks in parking lots because of all they go through to survive," she says. "I think the common species teach us a lot about how to be successful as plants."

"I get excited about plants growing in cracks in parking lots because of all they go through to survive. I think the common species teach us a lot about how to be successful as plants."
Ava Hoffman

As part of her Urban Evolution Comparative Study, she is hoping these common dandelions will show how plants may genetically adapt to the stresses of urban living. They are grown from seeds collected by collaborators last year in Baltimore, Boston, Minneapolis, Phoenix, and Los Angeles—far-flung urban locations presenting varying growing challenges, from extreme heat and smog to splashing road salt and polluted soil. She's growing them in individual labeled pots under identical greenhouse conditions so that any variations in the adult plants—their height, seed production, and so forth—will be the result of nature, not nurture. She will then examine the plant's DNA to quantify any genetic differences found.

"I'm really interested in how we can better understand genetic variation and how it can improve things like carbon storage," when plants capture atmospheric carbon dioxide and use it to grow, Hoffman says. "And, also, ways in which it can actually help us to build resilient ecosystems and urban green spaces."

But for Hoffman, this research is also about being a people person.

"Ecology was sort of seen as this discipline where you go into the forest where there's not a human in sight and study patterns there," she adds. "We're sort of shifting that ideology to be more like, 'Hey, how do humans fit into this equation?' We know we can have a profound impact on green spaces and the world around us."

And a note to Homewood's grounds­keepers: She promises that none of her weedy subjects will escape and pop up in the adjacent garden, as plastic bags will be placed over blooming plants. "I don't want any cross-pollination, either," she says.

On green thumbs: I don't have one. I think the reason why I'm so interested in plant stressors like drought is because I've killed so many houseplants.

Ecological dream destination: Yes, I'm drawn to common plants, but if I could go anywhere it would probably be the Fynbos region in South Africa, which has one of the highest levels of plant biodiversity in the world.

Her streaming queue: I just moved to Baltimore in March, so my partner and I decided to watch The Wire because it's based here. I really like the show. It does a good job of showing how gray most characters are.

The new home: I love Baltimore. I moved here from Boston, where I feel like there's a pressure to conform and be a certain kind of person. Baltimore has space for everybody.