Louis J. Forster, chair of the board of trustees, is doubling down on his support for faculty doing extraordinary things by renewing the President's Frontier Award

When Sharon Gerecht received the inaugural President's Frontier Award in 2015, she knew the $250,000 grant would enable her to explore new ideas in her research on stem cells and their microenvironment in health and disease. The annual award, conceived of and funded by Louis J. Forster, A&S '82, SAIS '83, chair of the university's board of trustees, is unique in that it is open to all faculty in the university and provides a monetary gift to be used at the awardee's discretion. Now, thanks to a $1.25 million gift by Forster, the award has been renewed for another five years. 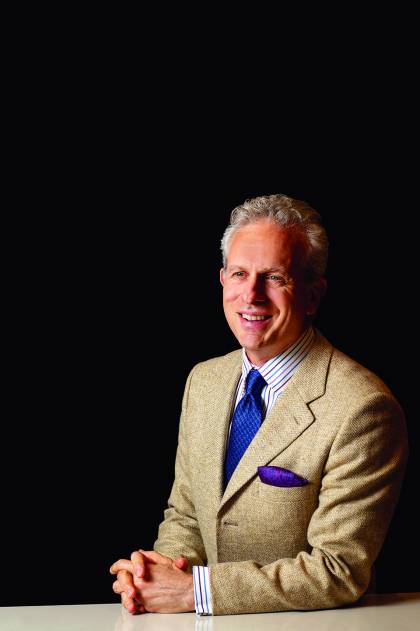 Image caption: “I think there are projects begging to be funded that can have near-term impacts,” says Louis J. Forster, chair of the board of trustees.

"I liked that the [award] was unrestricted money," Gerecht recalls. "I could try new things rather than be bound to a specific grant or a specific agency mission."

Five years on, Gerecht says the impact of the gift exceeded her initial expectations. Gerecht, a professor in the Department of Chemical and Biomolecular Engineering, became director of the Institute for NanoBioTechnology at the Whiting School of Engineering in 2017. The appointment, she believes, can be traced to her receiving the Frontier Award.

"The award elevated my profile and helped me to create new collaborations, and eventually to lead this interdisciplinary institute," she says. "Because it was a presidential award, it raised my profile outside of Hopkins. In October 2019, I was elected to the National Academy of Medicine following a career in engineering. I believe the award had something to do with making people outside aware of the caliber of work that I do."

Tangible, exciting impacts such as these are what Forster hoped would come from the award. Forster wanted the Frontier Award to have a sense of immediacy, unlike government grants, which, though larger monetarily, can take years to obtain, execute a research project, and publish the findings on. He likens the honor to a "mini MacArthur grant."

"This was meant to identify the group of scholars and scientists in the university reaching for that next step in their career who could greatly benefit from one year's worth of funding," he explains. "I thought it was an exciting way to energize projects and people who don't normally have access to funding."

Forster spent much of his career as a partner at Cerberus Capital Management. More recently he moved into the venture capital field. While the award closely mirrors that work—where a small amount of funding at a critical time makes a positive difference—his interest in funding the Frontier Award is actually rooted in the example set by his philanthropic parents and his own desire to give back to the university in a meaningful way. He explains he did not want simply to write a check to the general fund, preferring to contribute in such a way that he could feel personally engaged with the process.

"Hopkins has always done a lot with less resources than its peers," Forster says. "That's attractive to me and is part of the venture capital world as well—intense focus with less resources is often more productive than having more resources. I thought that Hopkins was a place that would well take care of this type of grant. Whereas a lot of institutions might not pay notice to a gift this size, they've proved to be good stewards."

Forster wants the gifts to generate a product that becomes part of a particular discipline's tool kit, and to create significant advancement in the recipients' careers. Since Gerecht received the first gift, the award has been given to a musician, a biologist, a medical researcher, an astrophysicist, and most recently, a mathematician.

By extending the award another five years, roughly the timeline of his tenure as board chair, Forster looks forward to watching the work of recipients unfold at a time when he is even more closely aligned with campus than usual. The excitement and immediacy Forster hoped to inspire certainly continues. In January, President Ronald J. Daniels surprised Emily Riehl, an associate professor in the Department of Mathematics, with the $250,000 grant for 2020 in support of her work in infinite-dimensional category theory, an emerging area of study that helps mathematicians refine their work and simplify math for a broader audience. Riehl was drawn to category theory because "the proofs were the most beautiful of any of the other areas I've encountered," she says. "It was sort of love at first sight and I am lucky to be able to do what I love."