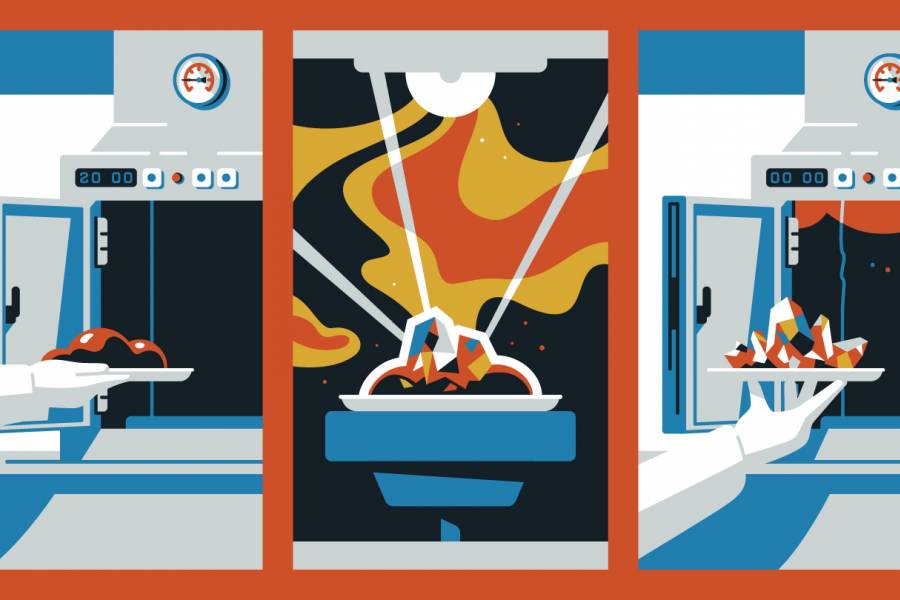 On Homewood campus, a lab to create materials that have never before existed

At the end of a tour of the PARADIM facility, Tyrel McQueen ushers me over to a table covered with squares of white cheesecloth. Resting on one stretch of fabric are two 3-inch charcoal-gray rods, which on quick glance resemble worn-down drill bits. McQueen smiles, as if he's showing me the Hope Diamond. I'm not impressed, and it shows.

But then McQueen, a professor of chemistry and of physics and astronomy, offers some context. Two years ago, the material I'm looking at didn't exist. Its base component, boron carbide, did, just not in this form. "These were the first single crystals of boron carbide ever produced in the United States, and still the largest," McQueen says. Actually, call it boron carbide plus, as this single crystal version features newfound electrical properties and an enhanced toughness owing to an extremely tight chemical bond. It's so tough, in fact, that this material has applications for use in military tank armor and bulletproof vests. And it's adaptable enough that it can also be used to build a new generation of semiconductors in electronics that better withstand extreme conditions such as radioactive environments found in outer space.

This material was grown here at the PARADIM Bulk Crystal Growth Facility, located in the basement of the Bloomberg Center for Physics and Astronomy. If you already associate crystals with magic, this facility takes the connection even further with its own special blend of high-tech alchemy. At the bulk crystal facility, researchers at Johns Hopkins and across the country can't quite turn lead into gold, but they can make known materials tougher, slicker, smaller, or more magnetic. They can also combine elements to make something completely new, pushing the boundaries of what's physically possible. Similar labs are behind such discoveries as Teflon and Post-It adhesive.

The boron carbide crystals were created by a team led by Michael Spencer, a professor of electrical and computer engineering at Morgan State University, using what is known as the melt-growth method in the facility's tilting laser diode optical floating zone furnace. In the laser furnace, one of the newest of several such furnaces in the facility used for crystal fabrication, the operator can direct extreme heat–producing lasers at a substance to melt it slowly over a period, say a few days, fundamentally altering the atomic structure of the material and turning it into something new, in this case a single crystal form. Think of it as a pure block of boron carbide, compared to the material's natural form made up of lots of smaller crystals with grain boundaries in between, tiny defects that tend to decrease the material's electrical and thermal conductivity.

At the bulk crystal facility, researchers at Johns Hopkins and across the country can't quite turn lead into gold, but they can make known materials tougher, slicker, smaller, or more magnetic. They can also combine elements to make something completely new, pushing the boundaries of what's physically possible.

"Boron carbide is a remarkable material, one of the hardest in existence," McQueen says. "But it's not perfect. Why does it fail in certain uses? That's why people want to make it better, which is what we do here."

The PARADIM bulk crystal facility opened its doors in 2016 with funding from the National Science Foundation. PARADIM—which stands for Platform for the Accelerated Realization, Analysis, and Discovery of Interface Materials—is part of NSF's Materials Innovation Platform program, a national research project meant to revolutionize the technology used in consumer products, industry, and medicine. "Think better computers, better transistors, but it's not just better, [this technology is] enabling different ways of doing those things," McQueen says. The program was prompted by a 2009 report by the National Academy of Sciences, which found that the United States, once a leader in advanced materials development, was falling behind in certain areas of materials research. Johns Hopkins, Cornell, Princeton, and Clark Atlanta universities would later partner to pitch the concept of PARADIM.

One of the core machines of the crystal growth center is the world's first optical floating zone furnace, which allows researchers to put materials under up to 300 times normal atmospheric pressure. The facility is also pioneering single crystal growth methods to selectively control the composition and structure of crystals on a layer-by-layer basis. "This way, you can build behavior into each layered structure that doesn't exist anywhere else in the world or universe, as far as we know," McQueen says.

Like they've done with magnets, he says. Typical magnets are bulk materials containing stacks of layers. Theorists have suggested that shrinking the thickness to a single layer might destroy its magnetic behavior, but recent experiments show that magnetism can survive in single-layer flakes, which can be vital to low-power electronic circuitry used in hard drives and in medical devices that detect cancer. PARADIM scientists have created layered materials, such as niobium halides grown at JHU, or ruthenium oxides grown in the Thin Film Growth Facility at Cornell, exhibiting controllable magnetism, making even smaller and more powerful technologies possible.

Lab-engineered materials impact the world because they enable you to do something that you could never do before, McQueen says. We can build entirely new devices, or tweak existing ones so they perform either more cheaply or at a higher performance, or some combination thereof. "Our five-year contract is coming up for renewal in six months, and as part of that renewal we've been asking, What's next? What are the next frontiers? What else can we do that has never been done before? It's exciting to think about."