The noise of life

Painters Winslow Homer, Thomas Eakins, and Thomas Wilmer Dewing form a formidable trio of 19th-century American art in Baltimore Museum of Art Chief Curator Asma Naeem's debut book Out of Earshot (University of California Press), and not only for the reasons they've been revered for more than a century. Homer's landscapes and scenes of Maine watermen working the sea left a significant impact on American artists' depiction of nature. The Philadelphia-based Eakins passed his discerning figurative realism onto a generation of students over a roughly 20-year teaching career. And Dewing's portraits of Gilded Age society absorbed some of the early approaches to romantic color exploration from French painting. Naeem isn't explicitly concerned with what she sees in these painters' works, however. She's more interested in what she can hear in them. 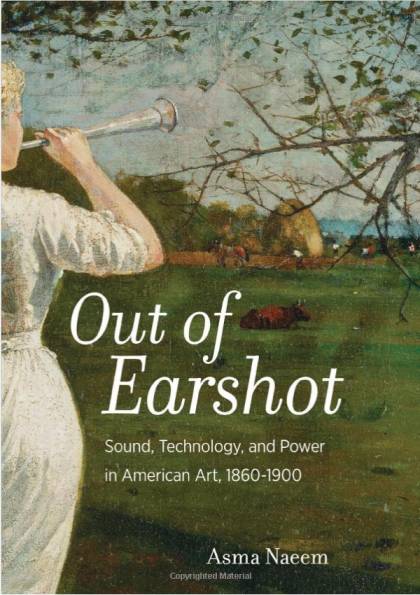 Naeem, A&S '91, puts these Americans into a historical conversation with the technological and social changes of the late 19th century, which witnessed both the advent of sound recording and other advances that introduced layers of noise to daily life. In her telling, Homer uses representations of horns, bells, and the human voice in his paintings to show how sound covers distance during an era when people were starting to use telephones and the telegraph. Eakins incorporates sound-making devices such as the phonograph and instruments into his works. And Dewing's depictions of refined women listening in well-appointed domestic spaces toys with Victorian attitudes that women should be passive listeners, which mimicked a growing record-listening public that was gendered female.

Out of Earshot grew out of Naeem's dissertation, so it has some of the patient arguments and endnotes expected of an academic text, but the work she does in contextualizing what 19th-century America sounded like provides new windows into thinking about art from the era. We typically only come into contact with 19th-century American painting in the cloistered quiet of museums and galleries, where decorum requests silent contemplation. Earshot reminds us that museums in the 19th century were bustling, noisy affairs, and that daily life was also filled with the hum of early machines such as typewriters, traveling musicians and live theaters, denser urban populations, and people studying sound and its effects and uses.