A COMPANY BREWED FOR SUCCESS 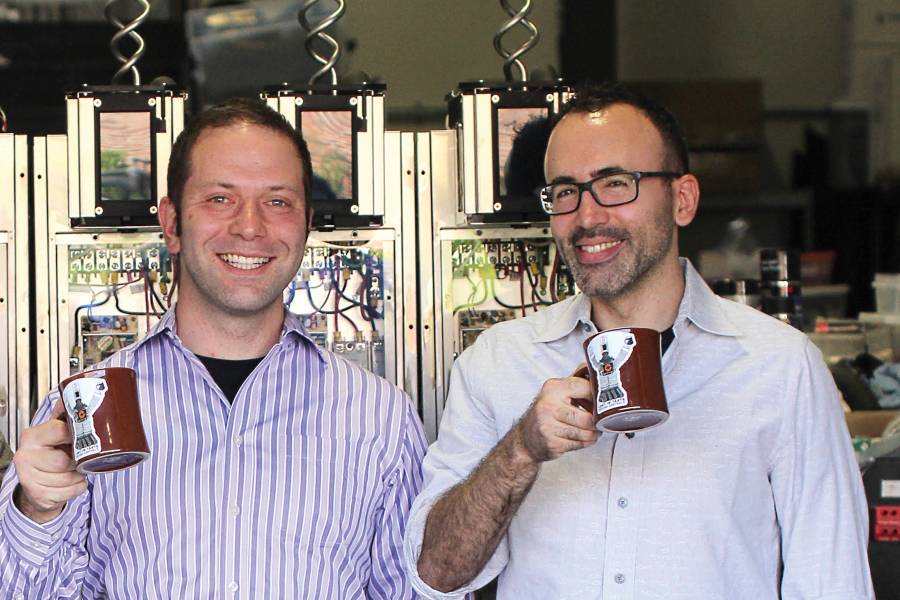 When Eli Salomon, A&S '03, met Joshua Avins, A&S '04, during freshman orientation on the Homewood campus, they instantly clicked. They ate together, saw each other at social events, and had many friends in common. But neither imagined their friendship would lead to brewing a superior cup of coffee.

Seemingly disparate academic pursuits would one day unite the duo: Salomon studied mathematics at Hopkins before pursuing a law degree at Harvard Law School and an MBA from the Wharton School, while Avins studied chemistry at Hopkins and later received a PhD from Columbia University. About seven years ago, Salomon—a longtime java fanatic who once sold espresso beans online out of his dorm room—wanted to brew smoother coffee, so he asked his old friend Avins, who was studying chemical extractions as a postdoctoral fellow at the University of Illinois at Urbana-Champaign, to build some models and run trials.

The result: The founding of Voga Coffee and the invention of the Ground Control Cyclops, an industrial coffee brewing system that relies on a vacuum pump to dry the grounds and then steep them two or three times over before blending the final beverage.

Ground Control is currently used by offices, cafes, and restaurants like Founding Farmers in Washington, D.C., and Chez Panisse in Berkeley, California. Soon, a smaller version will be available for home kitchens, too.

Salomon discussed with us the grounds for success of their nascent company.

What makes Ground Control Cyclops different from all the other coffee machines on the market?

Josh came up with this really interesting idea to brew coffee using the same coffee grounds multiple times and blend all those minibrews together to create the final beverage. What that does is create a much smoother, sweeter coffee. It could also, if we want, produce a much more concentrated coffee than a regular coffee brewer. Oftentimes, the process uses less coffee as well. That's the core technology we developed—a way of brewing coffee that uses a more modern understanding of extraction theory than, for example, a drip brewer, which was invented in 1954.

It sounds similar to wines made from different vintages of the same grape.

That's actually the analogy we use when we're trying to explain it to people. We're basically pressing the coffee beans multiple times, and each extraction pulls out a different layer of flavor, so when we blend it all together, we have something that's very balanced.

What's the difference between what you do and using the same grounds twice in a drip machine or a French press?

A French press does not substantially dry the grounds. So with Ground Control, we use a very powerful vacuum pump to dry the grounds before we add fresh water again for the second or third steeping. The drying process stops the extraction, and adding fresh water restarts the extraction from the beginning—which is critical, from a chemistry perspective. That is what ensures that the coffee doesn't overextract, or taste extremely bitter, which is what would happen if you tried brewing coffee two or more times, any other way.

Had you studied the coffee industry before creating Ground Control? What was your background before starting this company?

I founded my first coffee company out of my law school dorm room, selling the largest selection of espresso on the web. It was a way to avoid studying for the bar exam. I was getting a little stir-crazy and had all this energy, so that's what I did. For the next 18 months, I profitably ran the company but ultimately could not do that and also be a full-time lawyer in Manhattan, so I wound down the online espresso business.

After business school, I worked for an investor who had backed another coffee brewing technology. So, what I would say is: Between those two experiences, I learned a lot about coffee, and the holes in the coffee market.

You mentioned you're working on a home version of the machine. What will that look like?

There are coffee enthusiasts who already have our machine in the home, who wake up every day and brew two or three cups of coffee using the system. But for everyone else—people who don't want this big, industrial system—we're currently developing one that's half the size of Ground Control Cyclops. We'll sell it at a lower price point, and the design will be more amenable to home installation. That said, we also have a plan to build a truly compact system, which is years away, but hopefully not too many years away.

How does someone know they're drinking a really high-quality cup of coffee?

I always tell people, the best cup of coffee is the one you like to drink, right? So there's no objective benchmark for quality, in that sense. That said, there are some generally accepted attributes to a high-quality cup of coffee: You want something that's not overly acidic, with a meaningfully reduced bitterness and a balanced, natural sweetness. And I would say, the one that separates a good quality from a very high-quality coffee is nuance in the structure of the flavor.

Where did this enthusiasm for coffee come from?

I started drinking coffee very heavily in high school. I was a bad student freshman year. I would get perfect scores on all my tests, but I would never do my homework. And then my dad came up with this family tradition that every evening we would go to the local café, but only if I did my homework. That incentive made a big difference in my life; I became a very good student as a result of it. And of course, at Hopkins, I would always go to Xando Coffee.

Why do you love working in the coffee industry?

Coffee has more flavor compounds than wine. I love exceptional wine, but I've had some coffees that cost a lot less than a very nice wine, that were much more complex, sweet, and balanced. You can have a cup of the best coffee in the world for five or 10 bucks. Good luck finding a glass out there of even a reasonable wine for that price. That's something that really speaks to me. Drinking coffee is a culinary experience, but it's also really accessible, you know.