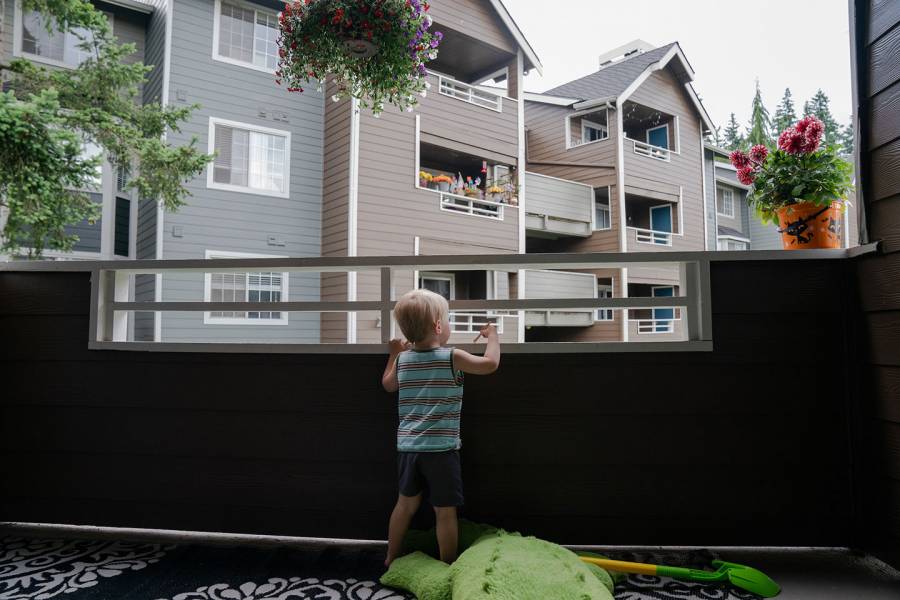 Image caption: A 3-year-old boy peers out at his family’s apartment complex from their unit in Bellevue, Washington. His family is part of Creating Moves to Opportunity, a housing voucher experiment that encourages low-income families to move to high opportunity areas.

Last year had been a fragile time for Ashley and her 5-year-old daughter, drifting without income through shelters and temporary homes around Seattle, when the word arrived: They were off the waitlist for a housing choice voucher.

With that approval came another offer. The housing authorities of Seattle and King County, Washington, were carrying out a pilot program to help voucher recipients with the legwork of finding new homes. Creating Moves to Opportunity, developed by a team of researchers including Johns Hopkins sociologist Stefanie DeLuca, would provide counseling and financial assistance through all stages of the housing search. Working directly with Ashley, a family navigator would research and suggest neighborhoods that could point her daughter toward better opportunities.

For Ashley (a pseudonym for the 35-year-old mom), CMTO's services meant the difference between shame and dignity in her rental process. She had a smear on her record that might have hurt her prospects—a past landlord claiming money was still owed—but her family navigator helped resolve the situation in court.

Ashley was among a group of 420 who participated in the pilot program between spring 2018 and spring 2019. Most were single parents, with household incomes averaging below $20,000.

Many families, researchers found, started CMTO interested in moving to a better neighborhood but pessimistic about their chances. "There's a lot of discrimination against voucher holders, even though it's illegal, and most families have pretty spotty credit history, which becomes a deal breaker," DeLuca says.

"For someone who's been marginalized and not always treated with much respect, it can be a big deal to meet staff who say, 'I'm here to help you move to a place that's good for your kids.'"
Stefanie DeLuca
Professor of sociology and social policy

CMTO was envisioned as an intervention of sorts to the federal housing choice voucher program, which the U.S. Department of Housing and Urban Development funds and local agencies administer. The Seattle experiment intends to tackle an unintended failure of that program: its persistent segregation of poverty. Though recipients of the so-called Section 8 voucher can use it wherever they choose, with rental subsidies paid directly to the landlord, the reality is that the vast majority remain concentrated in high-poverty neighborhoods with limited opportunities.

CMTO researchers are attempting to understand why: Are families not moving because of personal preferences, or do obstacles in the rental process block them from more desirable areas? And if it's the latter, can CMTO's extra services make a difference?

"For someone who's been marginalized and not always treated with much respect, it can be a big deal to meet staff who say, 'I'm here to help you move to a place that's good for your kids,'" DeLuca says.

CMTO springs from the research of one of the nation's leading urban economists Raj Chetty and his Harvard-based institute, Opportunity Insights. With an interactive mapping tool called the Opportunity Atlas, the team can track the outcomes of children as they grow up, measuring factors like salaries, college attendance, incarceration rates, and teen pregnancies. In some cases, they've found that a move to a better neighborhood at a young age can increase one's lifetime earnings to the tune of $200,000.

For the Seattle experiment, Chetty's team worked with the local housing agencies, along with a network of nonprofits and social scientists. From Johns Hopkins, DeLuca offered her expertise on mobility programs and landlord decision making to inform CMTO's creation and the research design. She is also leading a team of students, most based out of JHU's Poverty and Inequality Research Lab, in gathering narratives from CMTO participants.

More than a year into the pilot program, the early findings are striking: More than half of CMTO's families chose to move to areas defined as "high opportunity," where children have a historic track record of successful outcomes. That's a 40 percentage point increase versus voucher holders not offered CMTO services. Moreover, nearly 68% of those who moved to better neighborhoods reported being "very satisfied" in their new homes.

This summer, when DeLuca's team checked in on Ashley and her daughter, the two were settling into their new apartment on a hill in the Seattle suburb of Bellevue, where schools are good and crime rates low.

Where CMTO has made the critical difference, researchers found, is its individualized support—"the huge sense of relief that somebody has your back," DeLuca says. Family navigators spend hours with their clients, helping with everything from budgeting to negotiation with landlords. At the other end, CMTO builds trusting relationships with landlords themselves, addressing any concerns they may have about Section 8.

On both sides, financial protection is built into the model. For landlords, there's access to a damage mitigation fund; for tenants, money is available for circumstantial needs as they pop up. "One mom said having the $200 to pay for rental insurance was literally the deciding factor in whether she could make the move," recalls Kiara Nerenberg, a sociology grad student at Johns Hopkins.

A Better Address Can Change a Child’s Future

America has a housing segregation problem. Seattle may just have the solution.

In Seattle, A Move Across Town Could Be A Path Out Of Poverty

CMTO takes lessons from similar mobility programs past and present that have attempted to increase the effectiveness of housing choice vouchers. That's a research specialty for DeLuca, who has spent years studying one Chicago model and more recently the Baltimore Housing Mobility Program. She and Chetty are also among a circle of researchers who have analyzed the long-range impacts of the sweeping HUD experiment of the 1990s, Moving to Opportunity, which relocated thousands of low-income families in five cities to higher-income neighborhoods.

The initial results of that federal program were disappointing, in terms of the economic outcomes of adults, but a second look by Chetty and his team in 2015 found that children who moved at young ages achieved more promising trajectories, including higher college attendance rates and higher earnings. DeLuca's research in Baltimore—chronicled in the 2016 book she co-authored, Coming of Age in the Other America—explored similar outcomes.

In the world of housing policy, the implications of CMTO's initial success are big. "A number of cities are interested in implementing mobility programs, and CMTO was always envisioned as a model to help inform those efforts," DeLuca says. Earlier this year, when U.S. Housing Secretary Ben Carson invited the Hopkins sociologist to meet with him, the CMTO findings came up as a focus.

In Seattle, where CMTO is now advancing to a second trial phase, the team from Johns Hopkins will continue interviewing participating families, tracking how they're faring. "These transcripts are a treasure trove," DeLuca says. "We've barely scratched the surface."