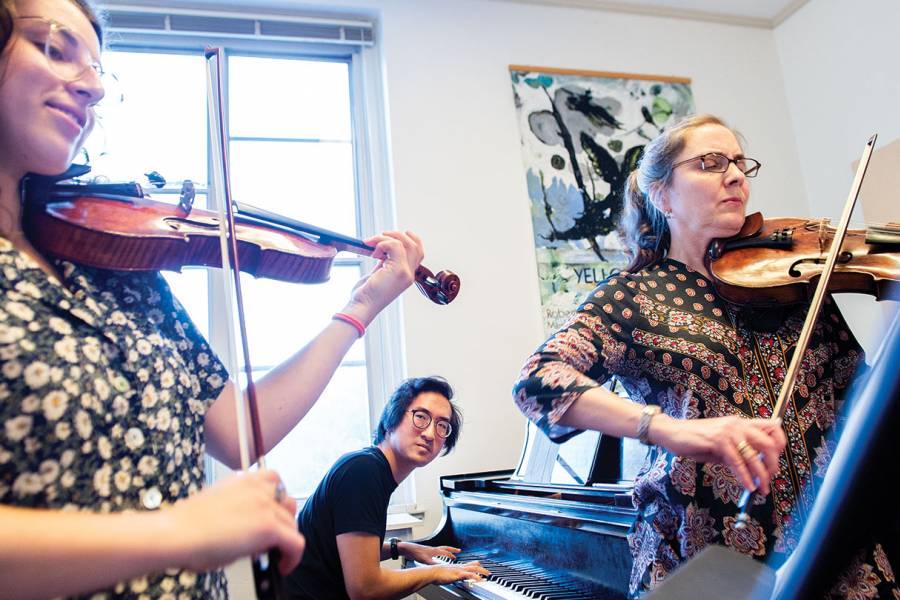 Folk artists Dan Zanes and Claudia Eliaza Zanes kicked up a boot-stomping, hand-clapping ruckus at one end of a multipurpose room at the Baltimore Station, a residential treatment program for veterans experiencing homelessness. He played guitar and sang; she kept time with a tambourine while belting out "This Little Light of Mine," and even threw in a topical rap between a verse. Before them, a roomful of men sat in chairs, bodies swaying, a few singing along. One guy in the front row harmonized with the duo in a rich, deep voice, and caught the ear of Eliaza Zanes. "You want to come up here and join us?" she asked. He smiled, shook his head no, and sang along with the next song with just as much brio.

The husband and wife duo had come down from New York to play part of the September-long festival celebrating the opening of the Kennedy Center's REACH performance venue. And while in the region, they also made time to perform shows for Our Joyful Noise Baltimore, a nonprofit organization started by violist and Peabody Institute faculty member Maria Lambros to bring concerts to people who don't always get the chance to see live music. The Zaneses performed an Azure Family Concert for children with autism at the Baltimore Hebrew Congregation. They sang for patients at the American Cancer Society's Hope Lodge in West Baltimore. They performed for inmates at the Maryland Correctional Institution in Jessup, and then the Baltimore Station. 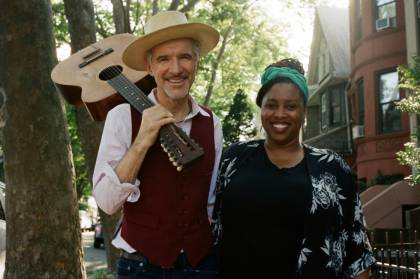 Though the concerts are casual, the performances are top-notch. "These audiences are very open," Lambros says of OJN shows. "They might respond more openly because they're in these challenging situations. Art's powerful. It changes you."

That power struck Lambros in 2015, when she traveled to Massachusetts General Hospital in Boston for a clinical trial to treat her cancer. One day while there, she heard music coming from somewhere down the hall. She followed it and found a group of volunteer musicians playing Bach's Double Violin Concerto. It overwhelmed her.

Lambros had played for people in assisted living facilities and hospitals while growing up in Missoula, Montana, but she'd always been the musician in that scenario. "Being a patient instead of a musician, the power of music really struck me at that moment," she says. The Bach piece "expresses sadness but also joy, sorrow, hope, happiness—all the feelings that you have as a patient. You're going through such a difficult experience, but you're also touched by the love you get from people around you. You're really looking death in the eye, but you're so grateful for the things that are happening around you, so you're very vulnerable. And then the Bach comes in—"

She pauses, looking for words. "It was different than any other time when I heard music," she continues. "So I said to myself, When I get better, I want to do something like this in Baltimore."

Lambros initially created the Peabody String Sinfonia in 2016 with the help of a Dean's Incentive Grant; the 20-piece student group played a few places and became a student-run endeavor in 2017. Lambros spent the 2017–18 academic year fostering relationships with organizations, fundraising, and producing a few concerts, and she launched Our Joyful Noise in 2018–19. She hired eight groups, from jazz to classical to a cappella. Throughout the season, each act then performed at OJN's four partners: the Baltimore Station, the prison, the cancer lodge, and the Azure Family Concerts.

"I said to myself, When I get better, I want to do something like this in Baltimore."
Maria Lambros
Peabody Institute

She creates a program for each performance. She pays and feeds the artists, and sets up travel and housing if needed. She wants the concerts to feel like a professional series, not charity. "She shows the performers and the audience equal compassion and preparation in a way that's very unusual," says Louna Dekker-Vargas, Peab '17, a New York–based flutist. Lambros was a mentor and hired the classical trio that Dekker-Vargas co-founded to play a pair of concerts.

Todd Troester, the community outreach and food services manager at the Baltimore Station, has witnessed the relationship between Lambros and performance sites grow over the past two years. "We deal with a lot of individuals who have lost touch with what you or I would consider normal," he says of their residents. "They've spent so much time focusing on security, shelter, and when their next meal is coming. They can lose sight of these little things that are enjoyable and therapeutic. So when you say a classical quartet is coming in, some people are like, 'What is that?' When they actually sit down and listen or walk past, hear, and stop by, it's tremendous what it means to them."

It's a power the musicians feel, too. "I'm a professional musician in New York, I take a lot of different types of gigs," Dekker-Vargas says. "Sometimes we get into an echo chamber because we don't get to see people who don't have music in their lives every day. When we see how they feel about it, it reminds us why we do this."

Moving from musician to patient and back to musician has reminded Lambros about art's ability to express what words can't. Last year, she hired New York's Omer Quartet to perform at the women's prison, OJN's first visit there. The group wanted to play Haydn and Debussy, along with Beethoven's Grosse Fuge, an intense, dark work. Lambros worried it would be too heavy and dissonant, and the prison wouldn't want OJN to come back. The musicians said they believe the Grosse Fuge expresses so much of what life is about—a good argument to play it.

At the concert, they performed the Haydn, and there was some talking in the back of the room; same with the Debussy. "And then they play the Grosse Fuge and it's silent," Lambros says. "The women loved it. One woman came up to us and said she was crying and had to leave. Her whole life was flashing before her eyes—the joy, the sorrow, the pain. That's what she got from the Beethoven.