From mentor to friend 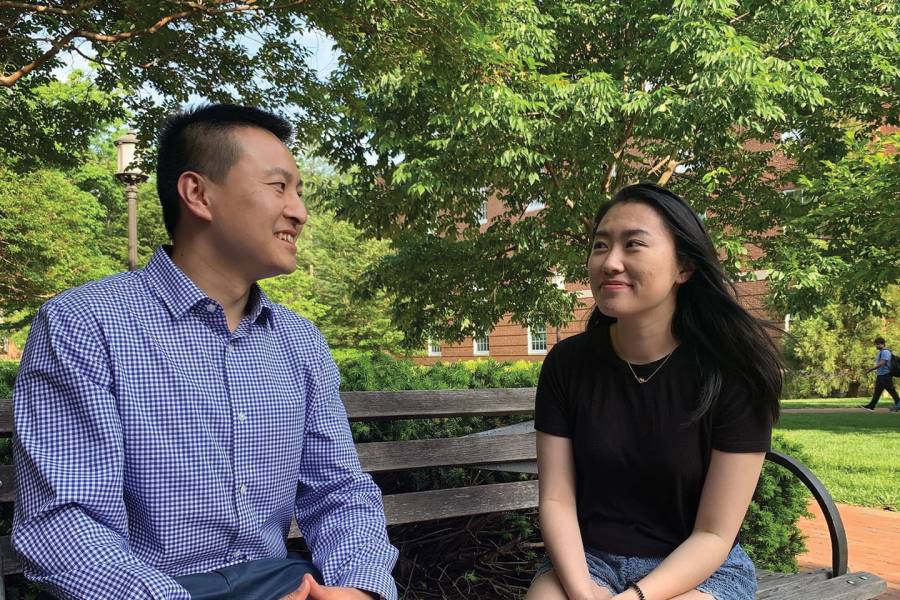 When Anna Yang, a student in Beijing, walked into her alumni interview with John Ji, A&S '08, in 2014, she was terribly nervous. She had applied early decision to Johns Hopkins but had no idea what to expect. Ji wasn't quite sure what to expect either: Yang was the first student he'd ever interviewed. "I decided to give back to the university by signing up as an alumni interviewer," he says. "I wanted to be a window into Johns Hopkins for high school students, especially in a country so far away from the Homewood campus."

Luckily, the interview went well for both of them. "John was really nice and approachable, and he guided me through the process," recalls Yang, A&S '19. "He talked to me about what to expect from college, things that I should experience; he told me about great events like Hoptoberfest, the lighting of the quads, and the spring fair Hopkins has every year." Ji was equally impressed. "I gave Anna the highest possible score," he says.

After Yang was accepted, Ji became a trusted mentor. "During my interview he talked about how he majored in public health," Yang says. "That's when I first had the idea of taking this major." Over the next few years, he was an invaluable resource, answering questions about her studies and, as a fellow international student, helping her adjust to life in the United States. "I felt a little bit intimidated by the culture shock when I first got here," Yang says. "I was having difficulties finding friends. He suggested joining volunteering clubs because you get to work with other students and bond with other people, so I joined SHARE [Supporting Hospitals Abroad with Resources and Equipment], where we collected and sorted unused medical supplies and later donated them to developing countries. He really encouraged me to try different things and to not be afraid to be wrong."

In 2018, the pair got together for the first time since the interview at a reunion event on the Homewood campus to chat about her future plans. Ji introduced her to some of his friends over some of Baltimore's best seafood, creating a small community with shared interests. "Gradually we got really close," Yang says. "He is the first person I reach out to when I have questions related to my major or internships because we have very similar experiences and very similar goals for the future."

Earlier this year, Yang applied to the same graduate program Ji attended—an epidemiology program at Harvard T.H. Chan School of Public Health. Just like her mentor and friend, she got in. "It was very fortunate to meet a student who has a very similar career interest as me—she's almost taking the same path in life," he says. "It's cool how these things evolve, and it's especially fulfilling to take part in the successful career path of a Johns Hopkins student. I believe more alumni should take the good karma and pay it forward."