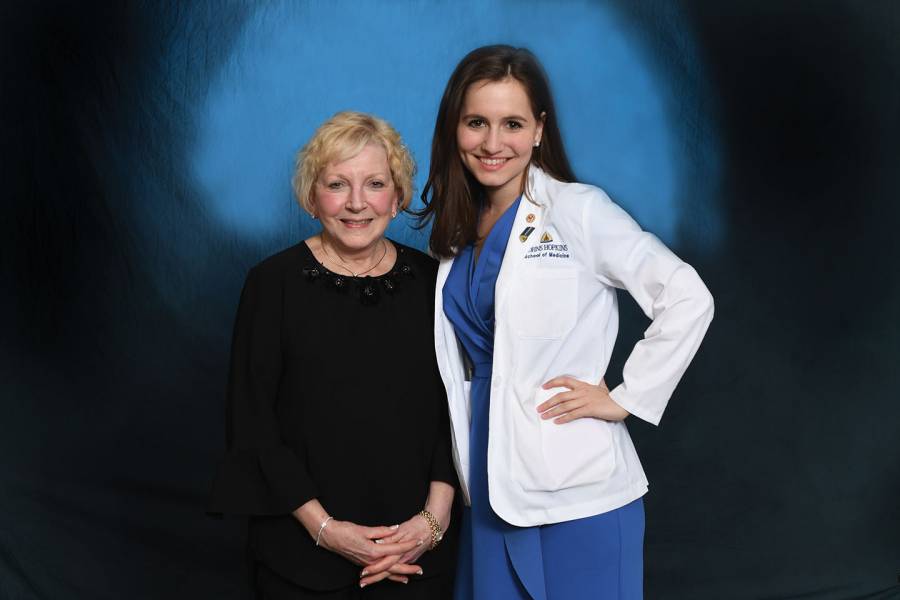 When Lisa Dunkle, Med '72, came to Johns Hopkins in the late 1960s, tuition and a year's living expenses totaled approximately $5,000. As a medical student, she cashed a $10 check each week at the cashier beside the Christus Consolator statue under the Dome in the Billings Administration Building. The money was enough for a week's worth of groceries and other necessities, like hair color.

She had a modest loan from the School of Medicine to cover the $3,000 tuition her first year and was awarded an annual $3,000 fellowship from the American Association of University Women for the subsequent three years. With summer employment and $500 National Institutes of Health grants for each of her three "elective" quarters, she finished medical school with minimal debt. But Dunkle realizes the financial picture for medical students in 2019 is much different. Now, she's helping to lift the burden of medical school debt for current and future students. In 2016, Dunkle endowed the Lisa Dunkle Scheffler, MD, Scholarship Fund in appreciation for the medical education she received at Hopkins. Two years later, in 2018, she gave to her fund in celebration of the School of Medicine's 125th anniversary as part of an initiative to substantially increase scholarship support. This year, Dunkle gave in support of Dean Paul Rothman's Zero-Debt Campaign.

It turns out philanthropy is a heck of a lot of fun.
Lisa Dunkle
Med '72

Her hope is that her gifts will allow Hopkins students to focus on making the world a better place, rather than "following the money" to pay back loans. "I feel very blessed, and I feel it's my responsibility to give back. I think chasing money is not an inspiring thing to do. For me, what was important was to make a difference in the world," she says, citing the motto of her undergraduate alma mater, Wellesley College: "Not to be ministered unto, but to minister." "It's extraordinarily important to me that in my career I can make a difference."

Dunkle decided to become a physician when she was a child. She initially committed to attending Vanderbilt University School of Medicine in Tennessee, but after being accepted to Hopkins, she changed course to Baltimore. "You went to the best college in the world," she remembers her adviser saying. "You can't turn down the best medical school!"

"My career has been far more financially rewarding than I anticipated," Dunkle says. "So, I look at my good fortune and hard work in the service of medical science, and I say, 'Holy Toledo! Let's give it away!'"

Throughout her career, Dunkle has stayed involved with her alma maters, representing her School of Medicine class as a member of the Johns Hopkins Alumni Association Alumni Council. She has also participated in the School of Medicine's 2019 MedTalks, a conference where Hopkins-affiliated students learn from presenters who focus on medicine, education, and development.

"I have always given to my schools," she says. "My parents told me it was my responsibility to give back. And my husband and now-grown children have always been supportive of my goals."

Her philanthropy started at $5 a year.

"But it grew. And as it became possible for me to give more, I did," she says, adding that the development teams at both Hopkins and Wellesley have helped extend the impact of her gifts. "It turns out philanthropy is a heck of a lot of fun."

While Dunkle has spent most of her career in the pharmaceutical industry, she started in academic medicine following a fellowship and residency studying infectious diseases in St. Louis. She left academia in the late 1980s and joined a team at Bristol-Myers Squibb developing antiviral drugs.

"AIDS was rampant, and it was a big problem," she says. "The work we were doing was just phenomenal. I couldn't imagine doing anything more exciting at that time."

In 2000, Dunkle transitioned to a smaller company before joining Schering-Plough, now Merck & Co., for several years. She was recruited to Protein Sciences, a Sanofi company, to be the chief medical officer for Flublok, the first influenza vaccine produced using recombinant DNA technology that does not require an egg-grown virus. She continues to serve as program lead for respiratory infections in clinical research and development for vaccines.

"My career has been a tremendous amount of fun, and it's been very fulfilling," Dunkle says. "There are people alive today that are enjoying life because of the drugs and vaccines I worked on."

Dunkle is just as passionate about supporting future Hopkins-trained physicians.

"They're going to do great things," she says. "I'm happy to be a part of helping them make that jump."